Do you like mahjong? Like... a lot? Then with nearly a thousand levels, Legendary Mahjong is fluttering its handkerchief coyly your way. Angry about being forgotten, the gods have set out to punish humankind, but luckily the "God of Unbridled Happiness" is going to help you restore their temples and avoid their sullen wrath. Legendary Mahjong is low on bells and whistles, but full to bursting with simply satisfying levels, different game modes, special tiles and more that will keep you busy for a long time. 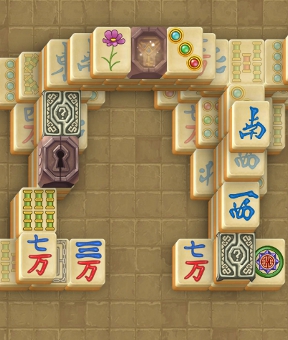 The basics of mahjong are very, well, basic. The goal is to remove all the tiles from the playing field by clicking two identical tiles, though some tiles, like flowers, can be matched even if they aren't identical as long as they come from the same "family". Because mahjong tiles are stacked, you can only remove a tile as long as it isn't obstructed... if there's something blocking it from sliding out to the left or right, or something stacked on top, you can't use it. Legendary Mahjong keeps this same formula, with a few user-friendly mechanics to make it a little more forgiving. You can click the last set you matched at the bottom of the screen to undo moves, or use the shuffle button to swap all the pieces around randomly, though these aren't available on all levels, and others have special requirements. The level is won when you match the two glowing green orb tiles, but to get a perfect three star rating, you'll need to clear the board. The counter to the left shows you how many available matches you have, and if you don't want to resort to shuffling, you'll plan your moves to clear space in the most efficient way possible, because there are often multiple matches of the same sets of tiles. Things get trickier when specific tiles are tossed into the mix, like Lock Tiles, whose key you need to find to remove, and each temple you visit has its own set of rules. The Fire Temple is traditional, for example, though the Earth Temple will have you matching tiles in a specific order. 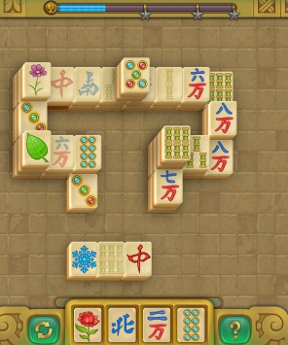 While Legendary Mahjong doesn't really offer a lot of frills, there's a lot to be said for a game that knows exactly how to do its core concept, and then tips a massive bowl of it onto your plate, saying, "Eat and be sated". Die-hard traditionalists may find the extra elements more gimmicky if all they want is ye olde school-e mahjong, but there's so much of it that you'll still find a lot to enjoy, and the game doesn't require you to finish all of a temple before unlocking the next one. Truth be told, most of the special tiles and modes do feel sort of tacked on, but it's not as if we aren't spoiled for choice. The presentation is simple, but polished, though the in-level soundtrack tends to vanish from time to time. If you're looking for a puzzle game with a lot of twists around one core formula and enough levels to glut yourself on for days, Legendary Mahjong is an easy recommendation. It's guaranteed to keep casual mahjong fans happy, if not slightly unnerved by the dead-eyed, glittering stare of "the God of Unbridled Happiness". Isn't that something Trilby should be handling?

2,962 Views
5 Comments
chrpa— Jayisgames needs your help to continue providing quality content. Click for details In their latest game, Rinnogogo tells story inspired by Japanese folklore about Kaguya, a princess from the Moon. The story, set in the present day, has the...  ...

2,409 Views
1 Comment
chrpa— Jayisgames needs your help to continue providing quality content. Click for details Welcome to Weekday Puzzle! This week we've got pancelor's clever game with interesting twists made in puzzlescript puzzler - this time playable with a mouse. Then comes...  ...

2,782 Views
5 Comments
chrpa— Jayisgames needs your help to continue providing quality content. Click for details Hi! Weekday Escape just arrived! With Selfdefiant you need to escape a harbour and a desert, and to do that, you need to get to a boat...  ...

Little Witch in the Woods Is an Adorable Pixel-Art RPG, Out Now on Steam Early Access

1,154 Views
0 Comments
jayisgames.com— Little Witch in the Woods is a retro RPG with a slickly executed pixel-art aesthetic. It's currently being developed by a promising young Korean studio called Sunny Side Up, and you can buy the Early Access version on Steam...  ...