Whisper of a Rose

A hard life in an abusive household has left college student Melrose a shy, withdrawn girl prone to daydreams and fantasies of magical worlds and heroes. When she hears about a new device that can allow people to enter their own dreams, she sees it as the perfect opportunity to escape her miserable life. Unfortunately, she's about to learn that you can't hide forever, especially not from yourself. Whisper of a Rose is an RPG fantasy adventure from Rose Portal Games that will keep you busy for a long time. 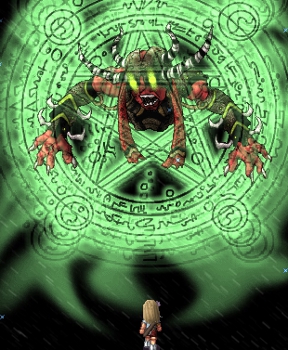 The game can be played with either the mouse or the keyboard. Move around the map, speak to people, and open chests. Like most RPGs, battle is turn-based, but unlike most turn-based titles, you can actually see the enemies on the map before you encounter them, which lets you run if you like. During battle, Melrose also gains the ability to summon various creatures to aid her, and the party members you'll acquire have their own unique abilities as well.

Throughout the game you'll earn points that can be spent on a rather large skill tree to unlock new spells, skills, and upgrades. Once the skill tree is unlocked after you meet your first party member, you'll be able to pick and choose what new abilities you want to learn, as well as how you want to improve them. You can increase the damage they deal, or lower the casting time or magic consumption. Melrose will also eventually gain the ability to craft a lot of unique weapons, armor, and other items to help her along the way.

Although all Melrose really wants is to escape her old life, she soon discovers the fantasy world she's always wanted isn't as perfect as she'd hoped. The land is under siege by strange creatures called the Phobius, made to destroy and always hungry, and Melrose can't seem to escape that nightmarish clown that draws closer to her every time she sleeps. All she has to go on is the name of a distant place called Rosaria where the Fairy Godmother is said to reside, and if she ever wants to make it home, that's where she'll have to go. She may find new allies along the way, but only if she learns to stop pitying herself and take a stand... for her own sake and other people. 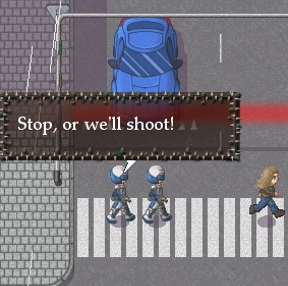 Analysis: The design of Whisper of a Rose is sort of odd. On the one hand, the hand-drawn artwork and character sprites are a little simplistic. On the other, the visuals are entirely made from scratch, which is pretty impressive. The original soundtrack is also extremely well done and is easily of professional quality. The game was in development for three years, and Rose Portal Games clearly used that time to turn out a product that looks and feels distinct. Sometimes I have commitment issues with putting on pants in the morning; this team turned out a game that's over 40 hours long and consists primarily of wholly original content. It... kind of makes me feel a little inadequate.

Whisper of a Rose is kind of an awkward duckling at first glance, one part story about coming of age and the power of friendship, and one part "Sailor Moon/Magical Girl Anime". There are some genuinely unsettling moments when Melrose's dream world turns nightmarish, and then you have places like Candy Mountain or Valentown that look like the sort of places you always dared hoped existed when you were a kid. The storybook presentation is fun to look at, but it definitely takes some of the edge off the attempted seriousness of the story. One minute Melrose is having nightmares about being chained in a shadow realm while the clown from the abyss (ughughughugh) crawls towards her, and the next she's making friends with living gingerbread men. 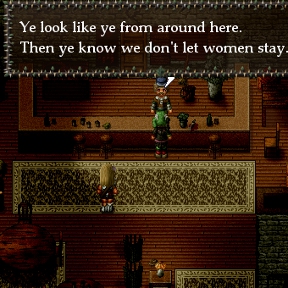 Still, it winds up feeling like it might be better enjoyed by younger gamers than RPG veterans looking for a serious challenge. The writing doesn't always seem up to the task of conveying the emotion in tense or dramatic scenes, and occasionally is a little awkward or oddly translated. ("Hihihi" instead of "heeheehee", or "yea" for "yeah".) Melrose starts off awkward, shy, and more than a little childish. Initially she doesn't seem to know how to interact with people and tends to lash out when she's frustrated or upset. Unsurprising, perhaps, given the abusive household she comes from, but I was more than a little relieved to see her grow up and mature over the course of the game. Her relationship with Hellena is rewarding to watch as she realises that self pity isn't going to get her anywhere, and sometimes you have to put other people before yourself.

Whisper of a Rose might end up overlooked next to more "serious" titles, but that would be a shame. The sentiment behind it is heartfelt, and the massive amount of love and work put into it has produced something that may be sweet and idealistic, but is also charming and enjoyable with a lot to explore. It has its flaws, but it also has a lot to offer, and if you're looking for something "lighter", you should definitely check out the demo.

"The design of Whisper of a Rose is sort of odd. On the one hand, the hand-drawn artwork and character sprites are a little simplistic. On the other, the visuals are entirely made from scratch, which is pretty impressive."

I'm not sure what you're trying to say there.. all game visuals are made from scratch otherwise there would be plagiarism issues!

I believe Dora is making a comparison to other games made with RPG Maker within which the developers use graphics and other assets that come with the program rather than creating the graphics from scratch. The graphics that are packaged with the program come royalty free.

Jay is exactly correct. :) Most old fashioned RPGs these days are made using resources from preexisting toolsets, like RPGMaker. WoaR is unique because all its visuals are original, whereas most other RPGs would make use of the visuals that come with the programs used to make them.

I see, there was no mention of RPG maker in the article, without that knowledge the comment threw me, thanks for clearing it up.