The Lost Inca Prophecy, from Seppia Interactive, blends match-3 gameplay with the look and feel of a hidden object/adventure hybrid. You play as Acua, a young Spanish woman living around the time of Columbus. One day a book in your beloved library speaks to you, giving you a prophecy about the doom of the Inca Empire. The next thing you know you are on your way to the New World with your friend Juan de Salcedo — a brave conquistador — as your only companion. Can the two of you find and restore the Inca temples to prevent the prophecy from coming true? 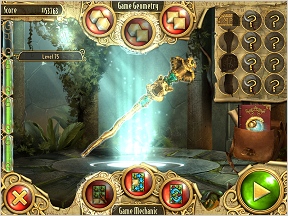 Despite the opening prologue and an opening hidden object sequence, this is not an adventure hybrid game. The meat of The Lost Inca Prophecy is match-3 — 96 screens of it, to be precise. Each is a standard grid with objects, some squares of which are covered by "tiles". Break the tiles by creating matches on top of them to clear the grid. When this is done, a piece of an object will appear at the top of the grid. You must now create matches below so it can follow a path to the bottom. Once complete, you earn the piece and are off to the next grid. Collect enough pieces to complete four objects and another hidden object scene begins!

The story itself is broken into four chapters, each covering a different temple. Every chapter contains 24 match-3 scenes and four hidden object scenes, with the HOG scenes coming at the beginning, end, and regular intervals throughout the chapter. Apu, a talkative Inca Thunder god mask, provides helpful commentary when encountering new obstacles or power-ups, and the whole thing is interspersed with tidbits of Inca culture between match-3 games.

What distinguishes The Lost Inca Prophecy from the admittedly enormous pack of Bejeweled clones can be encapsulated in one word: customizability (which, depending on which dictionary you consult, isn't really a word). Find the whole square grid thing too easy? You can switch to a hexagon-shaped grid mode which ups the difficulty. Tired of basic "swap" style match-3? There is a chain mode where you can make matches by dragging a chain across a series of objects, a la Cradle of Persia. Or you can switch to group mode, where you click on massed groups of three or more, similar to Collapse. You can switch back and forth between each match-3 scene, creating a huge variety of scenarios where you can challenge yourself or breeze through the level as you like. 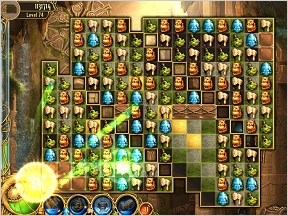 Analysis: The Lost Inca Prophecy presents players with an unusual set-up: hidden object scenes dotted across a matching puzzle landscape. It's kind of odd, if you think about it, as the only thing the two genres really have in common is they are widely appreciated by casual gamers. But Seppia Interactive stitches the two pieces together with style, and you find yourself flowing along with the game's pace with a natural kind of ease.

As for the match-3 elements, they are done exceedingly well. Each scene comes with an increasing number of power-ups you can earn, such as a hammer that will break one square, a bomb to break several squares, etc. As each level progresses the shapes of the grids become more and more complex, making completion trickier, even with more powerful power-ups. There are no timers to worry about, though, allowing a more relaxed, casual approach to gameplay.

Backgrounds throughout the game are beautiful, vivid, and almost fairy-tale like, with a strong emphasis on pre-Columbian design. The objects in the match-3 grids are all iconic to the Inca culture: corn, pots, pottery frogs, etc., and the temples resemble actual Inca temples that can be found in Peru today.

Some might be a little uneasy with the basic storyline: a Spanish woman and a Conquistador rushing to save the Inca culture while his co-workers are busily destroying it. However, history is history and what has happened, happened. The game itself tries to stick pretty close to what is known of Inca culture and history, although it does begin to get a little "Chariot of the Gods" fantastical towards the end.

Nevertheless, the ability to customize the match-3 segments allow for replaying over and over, trying out different combinations or repeating favorites. Hours and hours of fun to be had!

Just got through trying the demo, and dropped the game in disgust. Why? Well, the "hidden object" sections are that worse of all possible designs: you have to find parts of the objects listed - and not logical sections, just things like the bottom 1/3 of the blade of a trowel.

And they don't let you know what the pieces look like.

So you just might as well be randomly clicking.

We tossed it after 10 minutes of play, never getting to the match-3 stuff.

I've played the game and had different experiences.

First of all: On the top of the screen, you see the objects in the HO-part. So there is no random clicking needed. Yes, the parts are hidden and not always very obvious, but hey, therefore the name might be hidden object ;). In fact, I found a lot of them cleverly and creatively blended into the scenes.

I am a fan of the idea, to look for parts of items instead for the complete object.This style of hidden object has also been wildly successful in games like Flux Family Secrets and the Magic Encyclopedia series. And if there is really something hard to find, you can use the hint, which refills fast.

The match-3 part is great with the choice of how to play and the different shapes. It starts easy and gets more and more challenging, good for me, as I'm not such a good match-3 player. I had the chance to slowly get used to the mechanic of the game.

All in all: A very good game that was a lot of fun. Cleverly made, a great mixture of these two genres, everything fits! My thumbs up for this!