How well do you know your significant other? I made my husband sign a statement swearing there were no unholy alliances or unspeakable secrets in his past before I agreed to marry him. (Hey, I still remember Lover's Vow from Tales from the Darkside: The Movie; momma didn't raise no fool.) Danielle Hunt didn't have my foresight, and now she's paying for it in Alawar Games' newest horror hidden-object adventure title, Stray Souls: Dollhouse Story. When her husband Sam vanishes one rainy night after a strange package shows up on their doorstep, Danielle sets out looking for him and winds up discovering she doesn't know her dearly beloved quite as well as she thought she did. 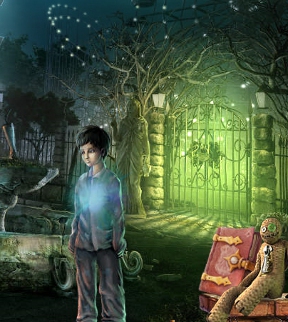 Alongside Danielle and one questionably helpful sidekick, you'll pay a visit to the town Sam grew up in and find out what the dilly is. The game has two modes, casual and expert, and the only real difference between the two is whether interactive areas are highlighted and how long your hint timer takes to recharge. The cursor will change as you move it around the screen to indicate something you can use or investigate, and hidden-object scenes announce themselves with what are by now a genre staple; pretty pretty sparklies. Gather items to get past obstacles, solve puzzles, and keep your eyes peeled for some Madame Fate-style morphing bonus items to collect throughout the course of the game.

Analysis: Oh, Alawar. I almost feel like a Disney princess. Here I was, going through my dull normal day, playing dull normal demos for dull normal hidden-object adventures, and then you swooped in the window and reminded me how fun things could be again. While I went into Stray Souls believing I knew what to expect, it didn't take long for it to show its true colours. There are a few surprising twists, and every a scary moment or two that make exploring quite rewarding. To be perfectly honest, the story does feel like it's a little bit all over the place, cobbling together all sorts of elements and themes, but the presentation is just so solid and entertaining that I hardly minded. The writing feels a bit clunky, unfortunately, and while it might seem unreasonable to be demanding an engrossing narrative from a casual title, here it really would have been the rich, cream cheese icing on your moist, fluffy carrot cake. 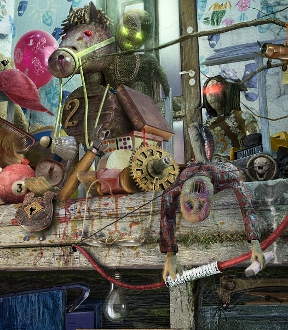 Visually, the game is solid, with nicely designed strange environments and some remarkably well done animated cutscenes. Hidden-object scenes are well designed, although in some cases it felt like the items were too small and faded/dim for me to possibly have found without the use of a hint. Somewhat less endearing is the music; while it starts off as serviceable enough, and even appropriately creepy, once you've heard the same handful of short looping tracks over and over and over you'll be reaching for the mute option too.

What's nice is that the game manages to strike an easy balance between hidden-object scenes and traditional point-and-click item hunter-gatherer gameplay. The puzzles you'll encounter are all unfortunately a little on the easy side, but a welcome chunk of them are at least interesting variations on existing puzzle styles. There's a Rube Goldberg-esque contraption, for example, and a puzzle that involves navigating around a series of clowns with cleavers. It feels like Stray Souls is trying really hard to present you with something different, and for the most part, it succeeds. While at times corny enough to make you raise an eyebrow, it's always entertaining, and never leaves you for very long without adding to the story. It reminds me a bit of an episode of the Twilight Zone, or maybe Tales from the Cryptkeeper, only without the painfully awkward morale being shoved down your throat. ("I think I will cheat on my spouse today. Gosh I hope I don't learn an ironic lesson over the course of a narrative.")

The bonus prequel chapter included with the Collector's Edition (the only one available as of this writing) is a bit of a disappointment if we're being completely honest with each other. It feels tacked on and unnecessary, disjointed and lacking any real puzzles beyond going back and forth and using one item on another. The main game itself will probably run most players around four hours, but you know what? I was fine with that. There's a good sense of pacing and story progression here, and any more and the game would have felt like it was dragging its feet to pad things out. The ending scene is probably one of the most impressive and satisfyingly climactic bits of work I've seen since Phantasmat. While not perfect, Stray Souls: Dollhouse Story is still very good, and definitely worth a peek at the demo if what you're a fan of the genre, and certainly if you're a fan of Alawar as a developer.

Outside the Toy Store

Stairway to the Chief's Office

Top of the Tunnel Stairs

Outside the Director's Office

Wow i just beat the game it was amazing I love the story this one a truly amazing game thank you for this haha :)

That fellow in the left side bar looks oddly familiar...

Outside the Toy Store

Stairway to the Chief's Office

Top of the Tunnel Stairs

Outside the Director's Office

Yeah, like it sais in the review, the ending animation is AWESOME! Made greater emotional impact than last two Matrixes..

Like the game. But can not get the Prequel chapter to come up, Played game several times and have not gotten the "Bonus Game"

In order to get the "Bonus Game", you need to have purchased the Collector's Edition.

Stray Souls Dollhouse, this game is Awesome! I finished in about 3 hours, was well worth the price. IF you want the bonus game make sure you buy the collectors addition.....It's spin tingling to play but yet not bad for children either I really enjoyed playing and have done it several times already.....

Read the comments before you buy this game -- there are lots of problems that haven't been fixed and it's very frustrating. For example, puzzles come up black screen on the Mac even though I have all upgrades and meet specs. it should work but it doesn't.

Dominique -
Have a look at the walkthrough above the comments to see if you missed something.