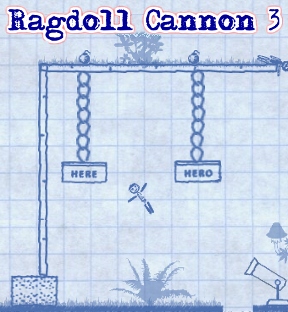 Those crummy little ragdolls, always getting in the way, doing those things they always do, making us angry enough to fire them out of cannons. Really, you'd think they'd learn their lesson after three games. Ragdoll Cannon 3, Johnny_K's latest entry in the Ragdoll Cannon series, features more cannons and more of the floppy dolls you'll to use to solve dozens of physics-based puzzles.

The idea is as simple as the name: use the mouse to fire ragdolls out of the cannon. Each level is constructed with a number of obstacles (both moving, immovable, and movable) standing between you and the goal. To complete a stage, all you have to do is get a ragdoll to touch the rectangle marked "here". Just one touch will do, but as you probably guessed, that's never a simple matter.

Level design has always been one of the most entertaining aspects of the Ragdoll Cannon series, and the third game does not disappoint. Expect to use your raggy buddies to push boxes, ignite bombs, turn wheels, move boxes, tilt levers, and do dozens of other tricks as you cope with loads of crazy physics contraptions. The fewer ragdolls you fire the better your score, but sometimes it's hard not to let half a dozen of them fly just to see what happens.

The controls are responsive, the physics are great, the puzzles are an excellent mixture of challenge and trial-and-error, and there are 50 levels to blast through. You can even create your own puzzles using the level editor. Although the game hasn't evolved much from its predecessors, it's hard to argue with a concept so simple done so well.

Really? He's done three of these and the first level starts with "Shot the ragdoll guy..."?

One of my favorite casual game series, and this entry doesn't disappoint. Depending on your mood, you can go for a low (good) score, or just fire ragdolls to your hearts content until you hit your goal.

A simple tip for those of you who are new to the Ragdoll series and want to get the lowest score:

I agree with Username. Wholeheartedly.

I love this series. Partly because I can actually finish all (!) the levels, but most because it's fun shooting the ragdolls, and because the game just looks so great. There were only a couple of levels (I forget the numbers, but I'm guessing 39 was one of them) where I felt like I had to rely on luck to solve the level.

I appreciate the grid - it helps to return the cursor to the right place after resetting the level for levels where the first shot is easy and the subsequent shot(s) have to be done just so.

Shoot when the mill-arm is pointing right at the cannon.
Feet should barely nudge the mill-arm (some/near no rotation).
It will slow him down so not to bounce down from roof much(or at all).
The aim point:

Aim so that the lowest part of the cross-hair is aligned to the top and centre of the 3rd puff of the closest cloud.

It's kinda funny. Level 39 is very hard for someone who is casually going through the game. However, it is relatively easy for someone who really wants to get a low score to get it in 1 shot (after considerable trial and error). Meanwhile, level 23 is pretty easy to understand and complete if one is going through the game casually, but it is very difficult to shave down one's score very far (my record is 4).

Fail - If you beat level 28 in one shot only, which is quite easy, you don't get the achievement for completing it within two shots. It never says two or less, but still... obviously you can do it in one shot. Thats kinda lame.

how does one do level 14? I'm stuck, thanks for all replies.

you complete level 14 by continuous shooting the rolling stone up the three steps.

How about Level 8? The target goes away...and even getting a doll to follow it offscreen does nothing. I'm sure I'm missing something obvious...but please help!

Try to do it in just one shot!

How do you complete level 43??