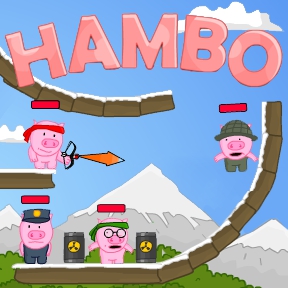 War is hell. But it can also be bacon-flavored. Sweet, wood-smoked, bacon-flavored, with a side of vengeance. And if your name is Hambo, then you're out to serve a nice helping of it. You see, the pig police doesn't like pink, bandana-clad mercenaries fresh off a tour of Vietham (yep, you read that right), so they captured one of Hambo's comrades. Armed with an assortment of weapons, the porcine warrior strives to get his friend back in the Donkin robotJAM Flash game, Hambo.

If you like games such as Fragger, you should feel right at home with this physics-based projectile shooter. You control your title character's aim and charging-shot strength with the mouse. Not satisfied to just toss grenades, Hambo has many weapons in his arsenal, including guns, C4, knives, and a certain muscled action character's trademark explosive-tipped arrows. Bad guys have a strength bar above them, and when it gets depleted, the enemy disappears in a bloodless poof of pink dust.

In addition to having extra weapons, Hambo differentiates itself from most artillery games in other ways. Some levels have slippery and bouncy surfaces that cause characters to slide around, bounce, or fall like something out of a John Woo movie. This movement factor forces you to make quick, accurate shots on the move. You're also not immune to explosions and projectiles; a rebounding grenade or bullet spray can make Hambo a casualty in his own war.

Hambo is a fun little title with plenty of gameplay under its hooves. While its 36 levels go by pretty quickly, there are gold medal challenges for those who seek perfection. There's even a versatile editor to make your own devious challenges, and a constantly-updated set of user-created levels from a passionate Hambo community. Mix this with the game's bright and colorful cartoon-like graphics and its amusing sound effects, and you've got a game you can really oink home about.

It's a cute, fun game, but I don't like the way they often give just enough ammo for you to complete the level, so if you miss a single shot or if the laws of physics ever work against you, then you have to do the whole level over.

Hambo. I just got that. Duh.