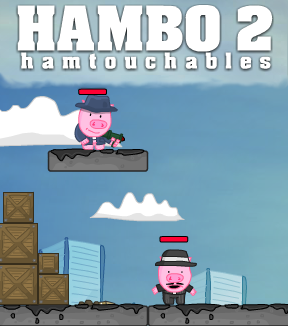 The city of Chi-hog-o has been under the iron hoof of Pig Capone for far too long. It's up to our old friend Hambo and his new friend Bacon to use their kind words and guns to smoke out the swine lord once and for all. They're no Sean Connery, but maybe they'll do. It's Hambo 2: a Donkin RobotJAM joint.

Fans of the original Hambo should recognize the hallmarks of this puzzle shooter hybrid: the wide selection of weapons, the stringent ammo limits, the cheeky sense of humor, the slippery physics, and the comprehensive level editor. The big new inclusion to the formula are the worm-holes that appear in later levels. They might not quite fit with the prohibition-era gangster motif, but they make for some interesting puzzles. Anyways, Hambo 2 is colorful fun, and the vast number of users created levels will leave you pigging out for quite a while. Here endeth the lesson.