Downloadable for Windows only, Gibbage is a one-panel player verses player bloody shoot-out with gameplay that is not quite like anything else currently available on the market. Created over the period of two (2) years by the talented indie game development newcomer, Dan Marshall, Gibbage has the graphical sensibilities of the pixel games of yore. 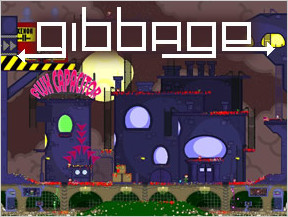 Your objective is to reduce your opponent's power to zero before your own is similarly reduced. Both power pools drain at a constant rate, but can be replenished by collecting cubes that drop randomly across the map. You can hold up to three of these at any time, my own observations indicated that one is worth 25 points, two are worth 70 points, and three worth 100. In addition, in order to help you out on your quest to frag your opponent, and thereby get them out of your way, there are randomly spawning power-ups ranging from homing rockets to land mines.

The options for play include a player versus AI option as well as the much recommended player vs. player hot seat option. The demo comes with 3 different levels, and the full game with a substantial 27 unlockable levels. What is impressive is the amount of dedication that has gone into making creating the quirks and environmental hazards that cause each level to be slightly different than the last.

Analysis: This game is a simple and enjoyable throwback to the days of pre-Internet multiplayer, where you would actually sit down with your friend, huddled around the keyboard trying to figure out who got which keys. It is in that environment where this game shines, and I recommend that before even trying the single player mode that you call over your closest friend or relative and get them to sit down and play some Gibbage with you—this game is easy enough to learn that even Grandma can join in the fun, but hard enough to master that you can still beat her when her rheumatism gets in the way. While the lack of true Internet or network multiplayer could be seen as a flaw, it is actually a conscious design decision, and once you start playing with a friend it quickly becomes obvious why. The other high points include the game's musical background and artistic style. While both are simple in nature they fit the atmosphere of the game perfectly and create a satisfying gaming experience.

Despite my high praise for all that is Gibbage, I do have one complaint. The respawn time is far too long. In a game this fast paced the player should never lose control of their character for an extended duration of time, and the ice power-up is a flaw for that reason as well. This should by no means deter you from picking up this gem and trying it out, but it would have been nice to have a few more options that would allow for adjusting things like which power-ups show up, the rate of power decay, and the respawn time.

In the end Gibbage is a testament to what a single dedicated individual can accomplish. It is a polished and fun game that is very much worth the download, and if you enjoy the demo the purchase is bargain priced. Click.

Looks like a nice game, Not my kind of game though

I'll probably download it later to check it out

This is pretty fun. According to your observations though, it's better for your score to collect 2 blue thingies at a time than three.

That's correct, and I'm not entirely sure why that choice was made. I did the math several times and it always came out the same, so I don't think it was an error on my part. Dan is on vacation right now, but when he gets back maybe he'll stop in and clarify why he designed it that way (or just tell me I'm doing my math wrong).

This game is difficult to play, to say the least. The menus, at least on my old 1.1GHz computer, are very jittery - apparently the low detail setting doesn't apply to them - and most importantly, the tutorial is next to useless, telling you to do things, but not how - for instance, how do I jumped block???

Until I can find out how to actually play this game (button mashing technically makes me jump, but only by blowing me up), opinion on the actual gameplay postponed.

Having worked out that "action" means "jump", I quite like this game, except for the jittery in-game menus and the fact that when the tutorial wishes to draw your attention to a short instruction you are required to read it for about ten seconds. Don't think I'll be buying though.

ok..maybe its just me.. but i just woke up my entire house after I installed the game. Way to blast out the audio on that game. I wish i could comment on the game, but after clicking start there was no help to say what the buttons were. I decided to quit... i waited a while and realised I had to push the "Y" key then still it didnt quit..

one word for this game: annoying

I think we broke the bandwidth on the server hosting the demo. This is a shame if he is away because we'll have to wait a week before we can download the game!

Hopefully it will be back up soon

I remember when this site didn't had downloadable games. Now, it seems that every time I come here (which is steadily decreasing), there are tons of downloadable games, many of which are for Windows, and thus, impossible for me to play.

Quite annoying. This site is truly going downhill.

I am sorry you feel that way, Pat, but the statistics don't really back up your claim...

Of the last 27 games posted, only 1 has been a downloadable game.

If that seems annoying to you, then I feel there is nothing we can do to please you.

Have you ever tried pleasing a great number of people? If not, you will find that it's nearly impossible, and you just have to accept that some people will be unhappy and leave.

And still I am not content with that, so I am hard at work on a filtering mechanism that you will soon be able to use to remove permanently from the page content that you are not interested in. Be annoyed no longer... soon.

Thanks for your feedback.

The cubes maths works, I assure you; you may be forgetting that putting cubes in reduces your opponent's score as well, so it's well worth putting the three cubes in for 100 points over 2 cubes for 70...

I have a Mac, and therefore cannot play these windows-only games. I get disappointed when I read a review about an exciting game only to come across "windows" somewhere halfway down the review.

That is why I want to say KUDOS to you who wrote this; "Downloadable for Windows only" is the perfect way to start off a review for one of these games. Thank you thank you for sparing my lazy butt the time it would take to read and get excited about a game I cannot play. Good luck, Windows-players.

P.S. are there ever Mac-only games? or downloadable games that work on Macs?

How to Write Game Reviews

1,266 Views
0 Comments
jayisgames.com— There is one thing that bothers me equally as a person who writes texts about games, and simply as a gamer - the insignificance or even irrelevance of text-based video game reviews....  ...

5 Tips To Get Started On Game Streaming

5 Views
0 Comments
jayisgames.com— Video games used to be only a pastime before. Yet nowadays it has become a lucrative and viable career for many. By streaming their playthroughs, game streamers can garner a large audience and earn a significant amount of cash...  ...

Game Design for Your Career - What You Need to Know

1,205 Views
0 Comments
jayisgames.com— If you're looking for a new career, you might be wondering what the prerequisites are for a career in game design. The following article will explain the skills you'll need to succeed in this field, as well as the...  ...

1,593 Views
0 Comments
chrpa— Jayisgames needs your help to continue providing quality content. Click for details Welcome to the Roundup 47 with three games! As mentioned in the previous roundups, only odd-numbered episodes are featured since even-numbered are for Robin Vencel's patrons. More...  ...