He knows what he's doing. The invitation to the graveyard on a moonless night in the midst of a raging thunderstorm? It's all part of the atmosphere for The Cain Killer's sick sense of ceremony and artifice. And even though you were supposed to come alone, nothing would stop your partner John from following. Those who don't think you're crazy say you have an "intuition" for looking into the past. Well, you probably are crazy, but that may be the only way you can save your brother. Cognition: An Erica Reed Thriller is a planned series of four point-and-click mystery adventure games by Phoenix Online Studios, makers of The Silver Lining. Starting with The Hangman and continuing with the early 2013 release of The Wise Monkey, the series puts you in the role of FBI agent Erica Reed as she investigates a series of horrific murders, continuing the story across releases to keep the suspense as palpable as possible. 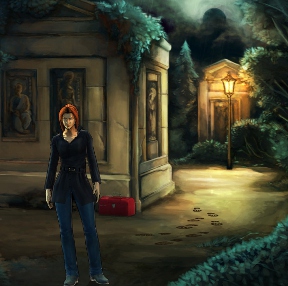 Click to have Erica walk to a location, and if the cursor lights up, click again to examine, manipulate, or talk with your selected target. In the top left corner of the screen is your inventory which allows basic item usage along with combining objects. You also have a phone (what FBI agent doesn't?) that allows you to contact other agents, search for information, or call your father for a hint. Clicking the cognition icon allows Erica to use her so-named powers, highlighting objects she senses are unique and allowing you to peer into the past and, later in the game, reconstruct events that transpired.

Analysis: The first episode of Cognition: An Erica Reed Thriller is a cinematic roller-coaster ride of a game. Like many movies, it dumps you straight into the story and doesn't let up until you've been thoroughly hit with plot, character, atmosphere and action. By the time it gives you a little room to breathe you may be feeling a bit overwhelmed. The second episode keeps the creepiness level high and pits Erica against a serial killer known as the Wise Monkey, smoothing out some of the rough points in the first chapter's gameplay quite nicely. It's worth noting that the story consultant for the Cognition series is Jane Jensen, game designer and author of Gabriel Knight as well as the Women's Murder Club hidden object series. 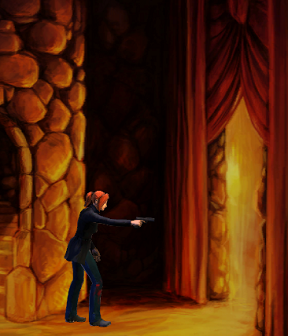 Police investigations are a natural fit for adventure games, and while the killer-with-intricate-themes concept may have gotten a little cliche about thirty minutes after the release of the first Saw movie, here it works quite well: it gives the usual sort of inventory puzzles at least minimal justification, and the writing is sufficient to push you in the right direction. (Albeit, sometimes without much subtlety: this reviewer had to suppress a chuckle early on when an object was described as being "a real fire hazard", and that it wasn't "a good idea" for a nearby candle to be so close to it. No points for guessing what happens next.) However, the real joy of Cognition is in its twisty, authentic, and very satisfying plot. Its complexity forces the pace of the overall game to be much slower than what the opening promises, but everyone loves a good procedural. It helps that Erica Reed is a strong protagonist with a real sense of depth to her motivations. While the supporting cast leans a bit closer to broad stereotypes, they are no less entertaining for it. A lot of that can be credited to the fine voice-acting team, especially Raleigh Holmes as the voice of Erica Reed, who lends the role just the right mix of toughness and vulnerability.

On the more negative side, the art is a decidedly mixed bag. All of the hand-drawn pieces and backgrounds are beautiful, but the 3D character models fall into the dull surprise of the uncanny valley. Their animation is good from afar, but those facial expressions had me wishing for sprites. Likewise, as quality as the voice acting team is, it is quite obvious that they didn't record their lines together, with the sort of mid-conversation "I'll stop talking so that the other person can interrupt me" pauses that hit like a speed bump. This situation wasn't helped by the occasionally intrusive bits of pre-dialogue loading. Finally, a few structural issues plague the middle-game, with a whole lot of revisiting locations to re-examine evidence you may have missed the first time around.

That being said, the Cognition series is off to a very good start. The Hangman is an excellent bit of crime fiction; a complete story in itself, while effectively laying the groundwork for later entries. At the time of writing, Chapter 2 has already been released, and the final two chapters are planned for 2013. All armchair detectives in the mood for a little darkness (and not allergic to colons in game titles) should definitely check it out.

I just bought this. Do not EVER EVER make cutscenes or any piece of dialog ever unskippable. Under any circumstance whatsoever. I can read much faster than your beautiful hand drawn art can leisurely show me. Just let me CLICK PAST DIALOG. I would love to play through this entire game, but this is so incredibly frustrating I probably am just going to shut it off and never bother playing it again.