Oh, hapless fantasy-themed castle and tower owners. When will you learn it's never a good idea to build structures out of easily-toppled, non-secured materials? You'd think surviving through like Siege Hero and Crush the Castle would have taught someone a lesson, but here again the daft occupants of multiple castles stand, waiting to be toppled to the ground. Catapult King from Wicked Witch Software is the latest in a long and respectable line of physics-based destruction games, this time taking the action to an up-close 3D first person mode so you get the best seat in the house to watch the destruction rain! 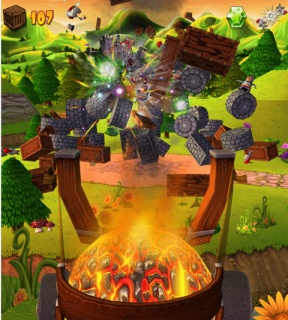 The princess is happy and free, prancing atop a verdant hillock. Then a nasty dragon comes along, drops a cage on her, and summons some knights to keep you away. Unfortunately for the fire-breather, you've got a rather spiffy catapult (glorified slingshot, really) capable of lobbing projectiles in a serious way. Tap the loaded rock and pull back, then maneuver the shot so it'll go precisely where you need it to go. Out in the distance sits a stack of crates, boards, stones, bricks, etc., and atop them are some pretty lewd knights who insist on taunting you to no end. Wouldn't it feel great to send them falling to the ground? Well, go for it!

Naturally, these knights aren't so helpless they can't build a tower that won't fall after a few rocks hits it, so as the levels progress, you'll encounter more distant structures, stronger materials, densely-packed layouts, and even some unconventional stages where the knights are spread out over bridges and other horizontal terrain. The goal always remains the same: knock everyone down, taking out as much of their buildings as you can. But you'll have to adjust the catapult's angle as well as utilize one of several visually impressive magic attacks that cause major destruction, all with the tap of your touch screen! 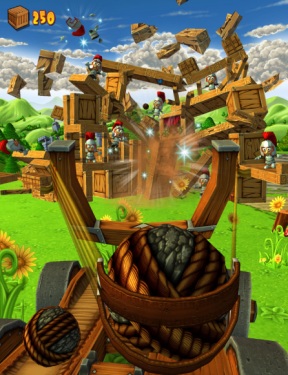 Analysis: The physics-based destruction genre is a highly-competitive one, especially after Angry Birds came along with its pigs and such. Instead of going head-to-head with the rest of the pack, though, Catapult King tacks something new onto the experience with its 3D first person perspective. Sitting behind the catapult, panning, zooming, and rotating the camera, and flying along as the stones damage structures adds a lot of depth to the otherwise flat genre, and words cannot describe how much more exciting it is!

The usual battery of scoring conventions and star rankings are available for stages in Catapult King, allowing you to go back and perfect your destruction to prove your mastery over the game. Being both fast and thorough earns you more treasure and points, but you also get bonuses for things like direct hits or keeping the tower constantly unstable.

As with many big mobile games these days, Catapult King features an in-app purchasing system to supplement gameplay. Fortunately, though, the purchases sit alongside the game perfectly, never forcing you to buy them, and doing nothing but adding to your ultimate enjoyment if you do choose to indulge. Purchases are restricted to magic packs, fortifying your mana pool with more points to cast your apocalyptic-type spells. You don't have to buy anything to beat the game, but it honestly adds a lot of fun to the experience while making some stages far easier to complete.

Catapult King brings something new to the physics castle-toppling genre, and it does it in an exciting, visually awesome sort of way. There's also a nice sense of exploration thanks to the freely-movable camera system. The game is packed with over 60 levels, multiple projectile types, Retina display support, and more levels promised with future updates. It's a free package you really shouldn't refuse, and it's more fun (and less illegal) than taking the catapult out and pummeling weak structures yourself!