Botanica: Into the Unknown

Camping with your famous scientist father, huddled around the fire, he'd tell you of strange worlds that no one had ever seen and wild theories on unexplained phenomena as you watched the starry sky. While his peers called him the "Crazy Dr. Wright," you loved the stories and were inspired by them to study botany, to seek out new species as if each proved the stories' verity. Just before his disappearance during an expedition, he told you, "Expect the unexpected, Ellie!" but it didn't stop your surprise the day you encountered something science couldn't explain, a portal to Botanica: Into the Unknown, a botanical wonderland harboring deeply coveted secrets in this lush puzzle adventure hybrid from Boomzap. 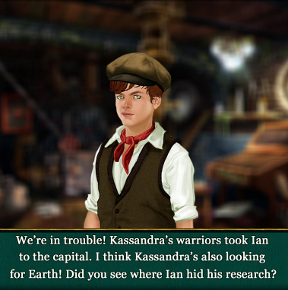 Your adventure begins at a brief puzzle: figure out the correct sequence of buds on a strange flower and it blooms, becoming a doorway to another world. You step through, led by a desire to connect in some way to your long missing father. Now you are an "Outlander" in a new dimension that is as curious about Earth as you are about it, and you embark on an expedition through a gorgeous fantasy world, conducting experiments in your botanist's kit, getting swept up in a heated conflict, and investigating strange flora and fauna.

Your travels take you far, so it's a good thing you have a tablet computer: it acts as your journal plus has a task list and well-organized map with pictures! You'll probably rely on it to help you more than once, but you can also get extra guidance depending on which difficulty mode you pick in the beginning: "easy" gives explicit hints and guided help; "normal" has hints that are more vague; and "hard" has no hints, no guided help and no skipping. The skip timer in both "easy" and "normal" modes take approximately five minutes to fill and there are neither glints nor sparkles regardless of the mode you choose. For those who'd rather not wait to skip, or who find that even the explicit hints are not helpful enough, the collector's edition has an integrated strategy guide to walk you through when you're stuck. Finally, a "How to Play" section explains, well, how to play the game, and you can access it at any time by selecting "Menu" during regular gameplay. 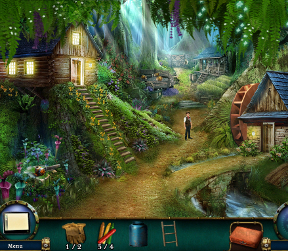 During your expedition, you'll meet a wide cast of characters and many send you on quests—help them, then they help you. True to its title, the focus of Botanica: Into the Unknown is on exploration while including a generous assortment of mini-games and puzzles. You won't hit a hidden object search scene until you're well into the first chapter but, when you do, it's not like any you've seen before. Instead of having a prescriptive list of nouns to seek amid a heap of cluttered objects, you listen to (or read) a narrative that correlates to mementos neatly arranged upon a desk; the goal is to pin down each item being alluded to during the conversation.

That's only one example of the many ways the hidden object puzzles are refreshingly different. On another occasion you're shown images of gears and parts to gather in one setting, only to have to replace them in new location. Later, you need to find and color in particular details of a picture. You'll also come across more traditional interactive search scenes where you have to perform a number of tasks to uncover the sought after objects, yet all the search scenes are spaced well apart and never repeat. 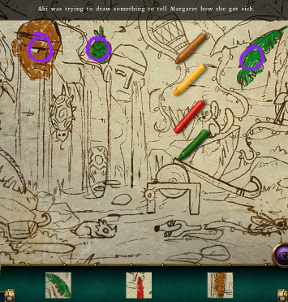 Botanica: Into the Unknown's minigames are equally diverse and varied; while most are fairly conventional in terms of gameplay, all match thematically to the current quest. For example, the need to find truffles for a curative herbal soup leads to a clever tile maze puzzle. The level of difficulty also fluctuates as the puzzles vary in style: some are short and simple while others require more thought, strategy and experimentation. Additionally, for an added challenge, there's an optional side quest to find all the collectible ladybugs and a list of achievements to aim toward.

Analysis: If I had to use only one word to describe Botanica: Into the Unknown, it'd be puzzlediversityfantasticaladventuringquest (maybe not a real word, yet one word all the same). The production values are just as you expect from Boomzap, the developer of fantasy adventures such as the Awakening series and Otherworld: Spring of Shadows, so you can count on high quality in all areas, from an intuitive user interface to eye-pleasing aesthetics to a detail-oriented and engaging story.

While this game is immensely well-made and beautiful—the story and adventure aspects of the gameplay are alone worth the purchase—the outside-the-box presentation of the hidden object searches is very remarkable. Honestly, I'm not an actual fan of most hidden object games which jumble up unrelated items into a messy eyesore then repeat the formula over and over, so here I am doing backflips in gratitude to Boomzap for going out of their way to present uncommonly inventive minigame-like searches, lovely to look at and fun to play in. There is an occasional pixel hunt in a couple of the interactive scenes, but it's hardly enough to quibble over when the rest of the game works so very well. 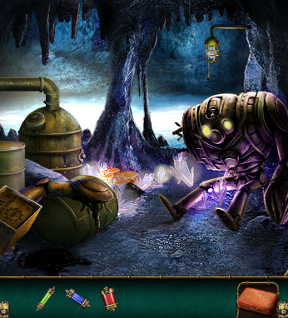 All the variety ups the entertainment but has the unfortunate side effect of feeling a bit uneven, as if Botanica: Into the Unknown can't quite decide what kind of game it wants to be. It crosses new ground yet doesn't let go of the old ways, either; instead of picking one or two styles, it tries to fit them all in so the concept of the botanist's kit is underutilized and there's a lot of breadth without enough depth. Even so, all the search scenes, puzzles and minigames are very enjoyable. They're logically designed and make sense inside the story, which starts off slowly yet continues to build in action as the game continues, over 5 hours for most players.

Looking for bright, richly layered artwork to go along with diversity in your hidden object puzzle adventuring? Test out the demo or just go for the full version to jump into the unknown yourself. As multifarious as the unusual flora and fauna of its verdant environment, Botanica: Into the Unknown is fresh and full of new fun to be discovered.

A Collector's Edition is also available. It contains bonus content not found in the standard edition: a bonus chapter, strategy guide, wallpapers, soundtrack and more. Remember that Big Fish Game Club Members pay only $13.99 for Collector's Editions (or 2 club credits), and collector's editions count 3 card punches of 6 total needed for a free game.