If you've ever seen Disney's version of "Sleeping Beauty" you would think that all a cursed princess had to do was fall asleep for 100 years and wait for a handsome prince to rescue her. It goes without saying that they lived happily ever after, and she probably never lifted a finger again. Unfortunately for Princess Sophia, the heroine of Boomzap's fabulous new hidden object adventure hybrid, happily ever after seems a long time coming. First she had to find her way out of her own cursed castle, encountering no handsome prince, merely a series of disgruntled goblins. Then she had to find her way through an enchanted wood to find the fairy queen. Now, In Awakening: The Goblin Kingdom, there is still no rest for the weary Princess as she must journey to the heart of the goblin kingdom to discover where the heck her people have gone. What with all the questing and puzzle solving involved the poor girl must be exhausted by now. Where's a prince when you need him? Or at least a cab? 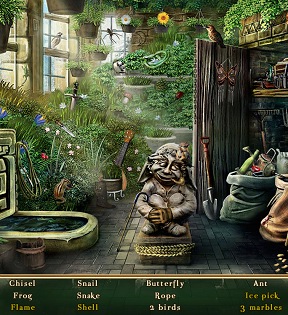 Awakening: The Goblin Kingdom is the third of the fabulous Awakening series of adventure games. In Awakening: The Dreaming Castle poor Sophia awoke from her hundred year nap to find the castle deserted (except for the aforementioned goblins) and she had to find her way out using mostly her wits as the poor girl was born with a bit of a problem: she had no intrinsic magical powers, a rarity amongst her people. In Awakening: Moonfell Wood Sophia trudged onwards, searching for her family and the rest of the folks of the kingdom, aided only by a helper fairy and a cute little pocket dragon. Now Sophia is back and still searching, accompanied by the pocket dragon and a new companion to aid her along the way, a rather stuck-up little owl named Randolph who is at least helpful with the hints as the story unfolds. Something is rotten in the state of Goblinhome and Sophia must discover what is up before war erupts between the humans and the goblins, with the other magical creatures of the forest such as gnomes and fairies caught in the middle of the conflict.

As with the first two games, Awakening: The Goblin Kingdom plays like a point-and-click adventure with some hidden object elements tacked on. The game is very puzzle-heavy, with the familiar (pipe puzzles, jigsaws, sliders and the like) mixed with a few original puzzles (mostly code-breaker types). Effort has been made to up the ante with the hidden object finding, including the necessity of rearranging things within the scene to find a certain object mixed with scenes that depend not on lists of things to find but pictures, silhouettes, or finding items based on hints and riddles. The mini-games and puzzles range from amazingly easy to difficult and can be skipped after a certain amount of time. Exploring the various locations is as simple as the click of a mouse, and a changing cursor is around to indicate areas to go, places to explore, puzzles, and conversations to be had. Yes, Princess Sophia can't do it all on her own so she will be depending upon the help and guidance of goblins, gnomes, the fairy queen (in a cameo appearance) and her own traveling companions. Eventually, hopefully, she will finally find the rest of the humans and prevent a major war. 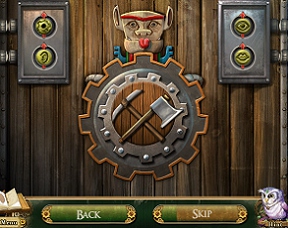 Analysis: The Awakening series of adventures has always been reliable for two things: beautiful graphics and puzzle-heavy gameplay, and Awakening: The Goblin Kingdom delivers both in spades. Boomzap has eschewed the hyper-realism of 3D rendering and gone with a fantastic, fantastical hand-painted look that suits the storyline perfectly. Lovely, lyrical music accompanies the poor princess along the way as she journeys from deep in a mine to a train station, from a cell in the goblin king's castle to a seedy tavern, from the gnome village to the goblin king's throne room, and multiple points in-between.

The puzzles and mini-games are a mixed bag of difficulties and special effort has been made to add little twists here and there to make gameplay more interesting. The pipe puzzles and other familiar games each have their own unique signature and the original puzzles are amusing and challenging. And just as The Dreaming Castle featured a large series of "goblinjong" puzzles (aka mahjong), and Moonfell Wood featured card-based games, The Goblin Kingdom has kept the pattern with a new batch of repeating games, this time tangrams, those tricky geometric re-create the shape puzzles. Also keeping the gameplay fresh are the varieties available within the hidden object finding, which even include a "reverse" hidden object scene reminiscent of Enlightenus, where the player has to put objects back into the scene rather than find them. The designers have also found a nice balance of hand-holding within the game, ranging from discreet sparks of light to helpful hints from Randolph the snooty owl, as well as a handy journal that not only keeps track of found information but a running list of goals to accomplish as well so the gamer rarely flounders about without a clue. 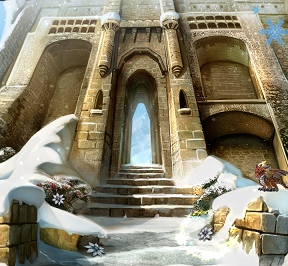 As stunning as the lush artwork is, however, it can be a bit of a handicap in the hidden object scenes, where finding painted objects laid out on top of a painted scene can be a bit difficult for anyone with less than perfect eyesight. There are also minor problems with clickable areas which can be especially tight within the hidden object scenes, as well as overlap with navigation areas causing a bit of confusion at times. On the plus side is the widely varied gameplay, including two modes, "normal" and "casual", making the game accessible to a wide audience and with a wide variety of adventuring skills.

Awakening: The Goblin Kingdom is a magical enchanted ride and a worthy successor to the games that preceded it. As before when you complete the main story there are a nice variety of the main puzzles (tangrams) available from the game menu to prolong the experience. If you disdain skipping puzzles and prefer to play in the more advanced ("normal") mode the adventurer can look forward to around four to five hours of gaming time for the story plus the Epilogue, pretty good for an adventure hybrid these days. Gorgeous, fun and compelling, The Goblin Kingdom is everything you could want in a hidden object adventure hybrid and more.

The walkthrough below attempts to complete the game with the least amount of backtracking. It is structured by chapters first, then goals and finally locations. It also lists where an item was found when you are told to use it.
Chapter 1 - Mountain Outpost

GOAL: Finding a way inside the outpost

GOAL: Getting a train ticket

GOAL: Flying out of Gobholme

Statue of the Oracle

Entrance to the Hedge Maze

Entrance to the Hedge Maze (again)

Chapter 4 - Return to the Gobholme

GOAL: Getting into the town

GOAL: Getting into the palace

GOAL: Getting across the gorge

GOAL: Catching a ride on the a unicorn

I think this game holds the world record for how soon in a game a Wham Line can be delivered. I mean, I wasn't even past the second screen when that line came up and knocked my expectations askew...

"The Goblin King is dead."

"The King is dead! Long live the userper (I mean King)!"

Why is that I'm stuck at "meeting the goblin king"?

The walkthrough below attempts to complete the game with the least amount of backtracking. It is structured by chapters first, then goals and finally locations. It also lists where an item was found when you are told to use it.
Chapter 1 - Mountain Outpost

GOAL: Finding a way inside the outpost

GOAL: Getting a train ticket

GOAL: Flying out of Gobholme

Statue of the Oracle

Entrance to the Hedge Maze

Entrance to the Hedge Maze (again)

Chapter 4 - Return to the Gobholme

GOAL: Getting into the town

GOAL: Getting into the palace

GOAL: Getting across the gorge

GOAL: Catching a ride on the a unicorn

@ Faris: If you're playing the demo, that's as far as it plays. You'll need to buy the game to get the rest. Unless you mean that you're stuck and don't know what to do next. Then I'll need more details about which chapter you're in and what exactly you're trying to do.