Zombies. Those creepy undead creatures. Ever since George Romero showed us just how nasty the undead can be, zombies have become a staple of good (and bad) horror. And they come in all shapes and sizes. The only thing as varied as the zombies are the ways in which resourceful protagonists come up with to send them back to the grave. But one of the most interesting weapons of choice has to be the bowling ball, as we see in Zombie Bowl-O-Rama. 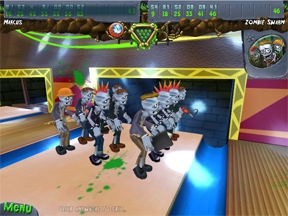 On a starry night, a mysterious meteor crashes just outside of town. It just so happens that it crashes into the local cemetery. An eerie green glowing goo comes exploding from the crash and soaks into the ground around the cemetery. And soon the slightly-decaying residents are feeling a bit more lively than usual. Their first line of attack? The local bowling alley, of course! It's then up to you, and your trusty bowling ball, to take out these creepy creepers, and pick up the spare, as well.

Zombie Bowl-O-Rama uses the same mechanics as other casual computer bowling games such as Polar Bowling. Facing down a pin-rack of zombies at the other end of the lane, set your horizontal position, your ball speed, aim, and bowl! As the ball careens down the lane, you can control it's direction with the mouse. While at first it is a convenient way of correcting a missed aim, it soon becomes a necessity as obstacles are thrown in your path that you either need to miss or recover from hitting. A well-aimed shot will hopefully result in the satisfying image of zombies flying in all directions, cursing your mad bowling skills. After bowling your spare, though, any zombies that are remaining will march forward down the lane, making way for the next rack. Hitting these guys will make them disappear. Unfortunately, they will not fly back and help you with the current ten-zombie grouping.

Adding to the fun and mayhem of this undead sports spectacle are the inclusion of power-ups that appear as gravestones. Hit them and they are added to your inventory. There are two types of power-ups: green and red. The green power-ups are ones that you can use to affect your own bowling to the positive, such as giving you ball a fiery boost, or turning the ball and the zombie to ice to make them easier to take out. The red power-ups are ones that you can use to adversely affect your computer-controlled or human opponent. These include a werewolf that sits at the side of the lane and pulls or pushes the ball into the gutter with its howl, barricades that you need to steer your ball around, or one that turns the ball into a head of cabbage, with the zombie-killing force of a head of cabbage (i.e. not a heck of a lot).

As you progress through the levels, you will move from the bowling alley to the streets of town, bowling day and night, and eventually back to the graveyard as you drive the undead hordes back to their eternal rest. As you do this, you can unlock trophies, such as bowling a 300 game, getting a strike against dancing zombies, or winning the game without using any power-ups at all (but where's the fun in that?). Or course, if the trophies aren't enough to keep you coming back, the chance to take out zombie hordes against a friend or family member will be. 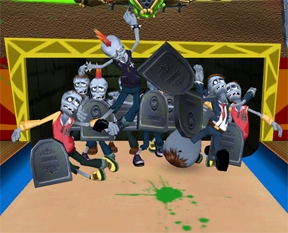 Analysis: Okay, let me get one thing out right now: Zombie Bowl-O-Rama is fun. A lot of fun. Really too much fun than it should be. It is the kind of game that sits unobtrusively on your computer, quietly beckoning you to play just one more round, forcing you to push aside everything else your working on to satisfy the need. It's the kind of gaming crack that makes a classic time-waster like Bejeweled or any number of solitaire variants. Whether it's the way the game controls, the fun power-ups or the fact that you're bowling down zombies, Zombie Bowl-O-Rama has an eerie undead grip that just won't let go.

The controls are very forgiving for those, like me, with absolutely no aspirations or illusions of ever being part of the Pro Bowlers' Tour. The chance to take control of the ball's path down the lane makes of a lot of fun, as you try to swerve to miss obstacles, hit power-ups, and then try to bring the ball to bear on the zombies at just the right angle to pull a strike. The manner in which you set up your shot is very intuitive, and I like the fact that the power of my bowl is not left up to a properly timed click, like so many other computer sports games. Makes it feel less random and more like I actually have control over what I am doing.

There is a nice variety of zombies you will find lumbering at the other end of the lane, from business men with mobile phones to punk-rockers with mohawks to construction workers with coffee thermoses. At the beginning of each frame, the lead zombie will do a variety of actions to taunt the bowler, yelling things like "Brains!" or doing a cut-throat motion with it's arm, while the other zombies get their own animations. Some will throw their hands in the air like they just don't care, some juggle their eye-balls, while others will slap their undead butts mockingly. While the variety of zombies and animations is nice, it would have been even better had there been more.

Graphics and sound are done quite well here. The whole idea of a 50's-style horror movie holds well throughout the game, from the menus to the background designs, even the clothes that the zombies are wearing. Graphics are in 3D, and were nice and smooth on my computer. Should you run into performance troubles, there are three detail levels that you can set the game to in order to alleviate the problems. Rocking music and nice bowling sounds round out the auditory package.

The only real criticism I can bring against the game is that the single-person game is a bit on the short side. But, even after you complete it, you will find yourself coming back to the game to play one or two rounds just for the pure fun of it. And the fact that you can play against another human also adds a ton of replay value to the game. Of course, those of you who are trophy hunters will be glad to know that there are 19 achievements to chase after in the game, as well.

Who knew that bowling a perfect game could actually save your life? Grab your bowling ball, and beat the undead hordes into submission with Zombie Bowl-O-Rama. Just make sure to bring your own shoes... who knows where those things have been?!

Zombie Bowl-O-Rama is available to download from these affiliates:

3,568 Views
0 Comments
chrpa— Jayisgames needs your help to continue providing quality content. Click for details Welcome to the Roundup 43 with three games! As mentioned in the previous roundups, only odd-numbered episodes are featured since even-numbered are for Robin Vencel's patrons. More...  ...

How to Get Started in Game Streaming in 4 Steps

946 Views
0 Comments
jayisgames.com— Game streaming is not only an interesting hobby but quite a profitable one: the revenue from game streaming reached $9.3 billion in 2020 already, with 1.2 billion active viewers worldwide....  ...

541 Views
0 Comments
jayisgames.com— Today, kids come into contact with tablets and mobile phones early. So small and curious, they quickly learn to unlock them and discover various things to click on. The most suitable way to channel their curiosity and spirit is to...  ...