The life of a forest wizard is a tough one. You must spend all day luring fairies with fireflies, stuffing the happy ones into little Chinese lanterns for later use. Then, all night you must fight the forces of evil, protecting fairied from evil witches, trolls and goblins while releasing some of them to protect the townsfolk. No wonder, after a thousand years of this constant work, you want to retire to that big cabana in the sky. Now all you have to do is train your successor. This is the basic premise of Youda Fairy, the new, whimsical time management game from Youda Games, which places you firmly in the driver's seat as the successor to this poor overworked wizard. 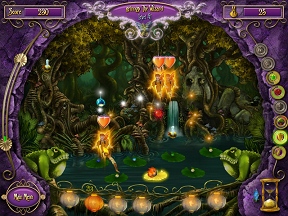 Gameplay is... well, it starts out simple, anyway. Somewhere in a magical swamp you must use a pretty flower to grab and collect similar colored fireflies. Collect enough fireflies and you get a fairy. Stuff the poor fairy into the lantern and set about collecting more fireflies until you have filled your quota. It sounds pretty simple, but there will soon be natural obstacles to the collecting, things that will disable your flower or block your access to the fireflies. Fortunately, there are other fireflies which drop power-ups to aid you in your quest. The round is over when you have collected enough fairies to move onto the next. After four rounds you will learn how to release the fairies within the town, brightening up the day (or rather, night) for the poor beleaguered townsfolk.

Eventually you will work your way up to trying to catch seven different colors of fireflies with seven different flowers. Working against you are nasty flying insects, hopping frogs, greedy salamanders, and nasty hungry toads who want to steal your fireflies. To aid you in your quest are a host of power-ups that banish the toads, protect the lily pads the flowers sit on, and a host of other things. Also helping out are some friendly spiders which can catch the fireflies in their sticky webs. When in the town, you will be parceling out fairies while trying to fight off wicked witches, trolls, goblins, and a whole host of nasties trying to block the fairies from their appointed rounds. Finish of the round perfectly and you are awarded a pretty constellation in the sky.

All of this is on a timer, of course, and you gain points and "stardust" from finishing the round quickly. Use your stardust to upgrade your fairy castle, which in turn helps you against an ever increasing horde of enemies. Crystal bonuses are awarded depending on how fast you finish a round against the clock. Eventually you will reach the point where you can gather fairies and fight of the bad guys well enough for the poor, tired forest wizard to take his much-deserved retirement. 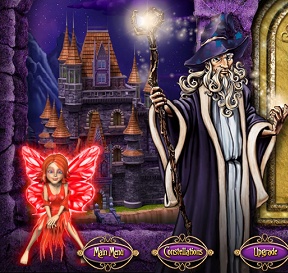 Analysis: Youda Fairy is a bit of a departure for Youda. Well known for its more realistic time management games, like Youda Marina and Youda Farmer, Youda has gone in a wacky new direction with this game, launching you into a world of wizards and witches, goblins and fairies, trolls, fireflies, lots of other magical creatures. Casual gameplay that is fun, frantic, whimsical, and completely out of this world.

Despite its kiddy look and appeal, this is a time management game that can challenge the most hardcore of time management junkies. The action quickly becomes fast and frantic, necessitating a massive amount of multi-tasking as the levels progress. Youda really knows how to do time management right, even if it is wrapped up in enchanted fairy dust.

There are a few minor problems with Youda Fairy, though. When in the swamp scenes it can be difficult to switch from one flower to another rapidly, and even more difficult to piece together the scattered pieces of some power-ups. And there is a minor glitch in the game: if a salamander is jumping on or off one of your lily pads when you hit the "time freeze" power up, it can become stuck there for the rest of the round, making gameplay a bit difficult. A minor bug, but one that can be annoying.

Still, there's lots of time management fun to be had with Youda Fairy. Fast, frantic, cute, and satisfying to play, Youda Fairy, while a bit of a departure from the Youda norm, is still grand fun.

Great game! Very unique concept with good graphics. Fun and relaxing to play. The higher levels get more frustrating, but overall it is quite enjoyable.