Sugar-coated, filled with rainbows and sunshine and love, and cheerier than a dentist the day after Halloween, Yousumin! is a new puzzle game from Square-Enix. In the same way Bejeweled Twist put a spin on the matching genre, Yosumin! shifts things around to deliver a new kind of puzzle game that's unique yet familiar at the same time. 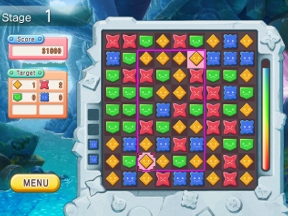 To clear pieces from the board, all you have to do is create rectangles or squares. Find a rectangle by looking for the same yosumin pieces at each of the four corners, then just drag a box (or click opposing corners) and watch everything disappear. Depending on the size of the set you created you'll get bonuses, such as a little extra time to fill up the meter on the right. Instead of scrutinizing small parts of the board like most puzzlers encourage you to do, Yosumin! is about scanning the entire grid and searching for patterns. It's a fundamental shift in the matching genre, and one that's just different enough to make you go "ooh".

Each level has a number of conditions you must meet before you can progress to the next stage. At first it's simple tasks such as matching a certain number of yellow, red, and green yosumin. Later, though, you'll have to get creative when the conditions become stringent, such as creating small sets, super sets, or only squares. And then there are the giant yosumin that appear and stained glass pieces you collect in adventure mode, adding a whole new level of puzzle solving to the mix.

As the game progresses you'll come across new types of yosumin that add a little cinnamon to your hot cocoa. Goldmin serve as wildcards and can be any color you need them to be, while wingmin can be moved around the board without restriction. Also keep an eye out for badmin, bigmin, plusmin and bossmin pieces, each with its own unique properties, some of which are more detrimental than others. 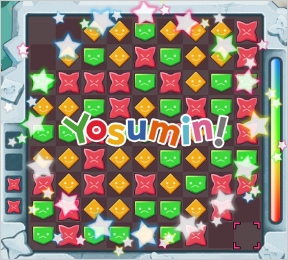 Analysis: The bottom of the matching puzzle barrel has been scraped so many times I'm afraid there's nothing but splinters left. It takes something special to get my attention these days, and only a few games have managed to do that in the last year. Bejeweled Twist did an excellent job reinventing the match-3 without really reinventing it, Dragon Portals tweaked the formula ever so slightly as to give me a giggle or two, and now Yosumin! hops along and falls somewhere in-between with its level of innovation and pure addictiveness. The game is immediately captivating, and while the novelty wears off just over halfway through the game, I kept coming back for more day after day.

No puzzle game is truly interesting unless there's a strategy to be discovered, developed, and mastered. Yosumin! does this by balancing the size of the sets you make with the bonuses you receive, both points-wise and with extra time. Sometimes it's a sound decision to make a number of smaller matches to stall the timer and to freshen up the board in the hopes you can make a large set. Other times you'll find yourself working the far corners of the screen so you can clear the entire board at once, a cheery event appropriately called a Yosumin!. There's also a combo meter to the left of the playing field that fills when you complete sets of like-colored yosumin in a row. After a chain of four, the board is cleared of that color yosumin, freeing you up for some major rectangles. This is one of the more difficult strategies to master, as you have to be both fast with your mouse and keen with your eyes. But it pays off!

As far as longevity is concerned, Yosumin! is surprisingly robust for a puzzle game. There are over 180 stages to play in the main adventure mode, the main chunk of the game where you unlock new characters, special equippable "treats" that affect gameplay, and collect shards. Endless mode is also available and is, well, endless. Unfortunately most of the game's content is shown in the first few dozen levels, leaving the rest of the game to dwindle into triviality. That isn't to say there's no challenge, just that you'll be less motivated to keep playing beyond then.

If you're curious as to how the game plays, check out the free Flash demo of the game available on the official Japanese Yosumin! website. It's a greatly-simplified version of what the download offers, but you can get a feel for the unique mechanics without much effort.

It's a bit of a surprise success, but Yosumin! has almost everything you would want in a casual puzzle game. It sputters and stalls halfway through when it runs out of new content to share, but the core mechanics are superb and interesting to the end. The more you play it, the more you love it.

And, sadly, not for Mac.

No mention of that Robot Riot game which employed exactly the same game mechanic months before this came out?

Nnnngh. This game kind of warms my little charcoal briquette of a heart, and I don't know if I'm okay with that. Strangely addictive. Also noteworthy as being the game with THE single most silky-smooth presentation and graphics I've seen from BigFish. Goes down like buttah.

@Blahp: As the review states, there is a Flash demo of the game, hence the Flash tag so that people who want to play Flash games, or who want to try this game out but not download it can see that it's possible.

@Dora: I concur. I really can't stand all the Match 3 games that are being produced in assembly as I find that genre incredibly boring, but the avatars used in this game alone are enough for me to want to play through it. I don't think I have ever seen cuter geometrical shapes. ^_^

Really, you need to address the fact that the basic game mechanic is not new at all. Tranchera mentions Robo Riot, and I know (but cannot provide evidence unfortunately) that there is at least one other game that employs it--and I'm pretty sure you guys reviewed it, too. This basically undermines your review, since the entire premise is that the matching puzzle genre is played out except for this CRAZY NEW IDEA FROM SQUARE ENIX ZOMG!!!

NeliNurk by Tonypa has a similar mechanic, maybe that's what you were thinking of. But the gameplay is much different from Yosumin.

I don't think this game is new, it's clearly labeled as 2006, so it's at least 3 years old. I have also seen several Flash games with exactly same mechanics (I don't consider Nelinurk to be same), but it's pretty difficult to decide which one has borrowed the idea or which was released earlier.

Yosumin was published in Japan on the Gameboy DS in 2007. This is the PC release of the same game. I don't know whether or not this originated the gameplay mechanic, but it did come before Robo Riot, and at least a few other similar flash games.

Yosumin is one of the first big releases of a game using this mechanic, so even in that sense alone, it's new. Yes, there are probably games out there that are much older with very similar structures. But tracing a matching game mechanic back to its origin is a bit like looking for whoever invented the wheel. I never claimed S-E invented the wheel.