Are you a fan of logic puzzles? If so, you're probably familiar with picross, the grid-filling game of narrowing the possibilities that blends crossword-like puzzle solving with number clues. If you know picross, you know the World Mosaics series, one of the few well-made entries in the downloadable picross world that deserves a corner of the spotlight each time a new installment is released. It's been a few months since the last game hit, but now, with World Mosaics IV, you've got a brand new story-filled picross adventure, complete with all the bells and whistles you've become accustomed to! 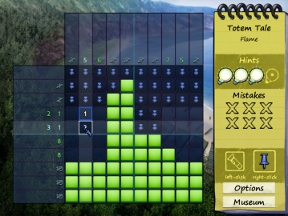 If you aren't a picross fan, the basics are easy enough to pick up on. Similar to sudoku in some ways, these logic puzzles place clues above and to the side of a grid of squares. Those numbers indicate which blocks that need to be filled, but what they don't tell you is how many empty spaces there are. For example, if a row says "3 1 2", you know you'll fill a group of three blocks in a row, a single block, and two blocks. At least one space must go between each group, and by using logic you can gradually narrow down the possibilities until a picture emerges.

Just like its predecessors, World Mosiacs IV builds a story around solving the puzzles, but it does so in a completely non-obtrusive way. Each time you complete a level you're presented with a colored version of the picture you made along with your journal entry. Dr. Lindsay Newcastle, curator of the World Museum in Atlantis, is trying to piece together the exhibits damaged by time. Since you happen to have a magical hourglass that allows you to travel through time, it's your job to assemble the tiles and piece together the Atlantean exhibit one square at a time.

You'll just need a mouse for World Mosaics IV, as all you have to do is click the squares you want to mark. Click and drag with the [left] mouse button to "color" blocks in, and click and drag with the [right] button to mark spaces as unfilled. World Mosaics is smart about keeping your cursor constrained to single rows/columns, and dragging a line of one type of marking through a previously filled tile causes no problems whatsoever. It's the next best thing to a pencil and a piece of paper, allowing you to sit back and enjoy the puzzle solving! 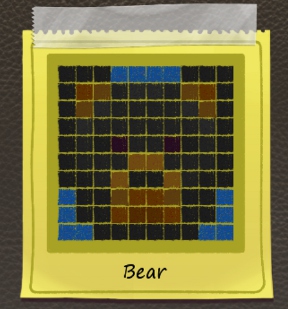 Analysis: The World Mosaics series has built a reputation for providing something just about every casual gamer craves: a great interface for solving puzzles, plenty of challenge, and a little bit of story to help things move along. Once again, Fugazo sends another winner out the door, with World Mosaics IV preserving everything that made the first games great and adding a couple of interface tweaks that make playing even more enjoyable. Can't. Get. Enough. Picross!

Over 150 puzzles of increasing difficulty and complexity await you in World Mosaics IV, which is a respectable number for any picross game. You'll have to wade through a dozen or more easy puzzles before you make it to the tough ones, but you can't make a game newbie friendly without increasing the challenge bit by bit. There are also bonus puzzles you can unlock while you play, as well as a tutorial for newcomers to the picross world.

A hint system is available and can be refilled as you play, but if you have to use hints, you're going about picross in the wrong way. World Mosaics informs you of mistakes, too, so if you're a hardcore fanatic, you might be disappointed at this. Make more than a few errors during a single puzzle and you'll have to start over. Patience, logic, and more patience are your keys to victory!

World Mosaics IV doesn't try to flash crazy gimmicks or wild mini-games in your face. Instead, it delivers a pure picross experience with a fantastic interface and a bonus story that can be enjoyed or ignored at your pleasure. You'll be hard-pressed to find a better downloadable picross game!

With every new game in this series I hope they implement multicolor puzzles...

Guess who programmed this game? ;)

Did anyone see the final bonus puzzle yet? There's a surprise that some of the more dedicated JiG readers may appreciate... :)

The story isn't as captivating this time for me, personally... however, I LOVE the soundtrack in this game, with the violin duets! :D

I was just wondering if anyone can tell me how to unlock the last 2 bonus puzzles. I have been through this game countless times and have yet to open them up. What am I doing wrong?