It's picross time again! One of the few big-release downloadable picross games has returned with World Mosaics 3: Fairy Tales. Continuing the fine tradition set by World Mosaics and World Mosaics 2, the third installment introduces plenty of new puzzles, a new story, and keeps the same smooth interface that makes it one of the best picross games around. 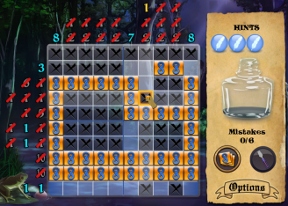 If you're new to picross, the basics are really easy to pick up. Similar to sudoku in some ways, these logic puzzles combine clues with a grid of squares, each of which can be filled or marked out. The numbers at the top and left sides of the grid indicate the number of blocks that need to be filled. What they don't tell you is how many empty spaces there are. For example, if a row says "3 1 2", you know you'll fill a group of three blocks in a row, a single block, and two blocks. At least one space must go between each group, and by using logic you can gradually narrow down the possibilities until a picture emerges.

World Mosaics 3 weaves a story in with the picross puzzling, adding bits and pieces of it between each level you complete. This time around, you're doing research in the library when you come across an enchanted book of fairy tales. You're suddenly transported into the book and must find magical emblems by assembling mosaic tile pieces across a dozen fairy tale-themed levels. There will be some familiar faces, which is always a nice surprise, but the flavor text can be completely skipped if all you want is some quality time with your picross puzzles.

Analysis: When it comes down to it, any non-paper version of picross fails or succeeds based on its interface and control scheme. Nothing is as easy as marking a sheet of paper with a pencil, and when translating that to the computer, great care needs to be taken to make everything as intuitive as possible. With picross games you need to make both filling and x-ing squares easy to do. World Mosaics 3 presents you with two options: click to toggle, or click to mark. Both work very well (though I'm partial to the latter), and the game is smart enough to recognize click/dragging so that it doesn't override previous marks. 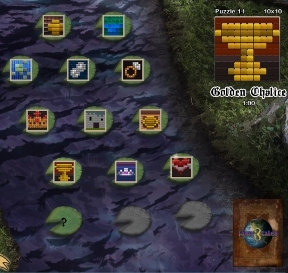 If World Mosaics 3 has any shortcomings it's that it doesn't even attempt to do anything different than its predecessors. The third game is basically the same as the first and second, only the puzzles are different and the storylines have been changed. Challenge is somewhat lacking in World Mosaics 3, and picross fans won't often find themselves getting stuck with these straightforward puzzles. In fact, just like previous installments, it's kind of a chore to work through the first few dozen levels just to get to the interesting puzzles. The tutorials can be skipped, thankfully, and the story (while disposable) is interesting enough to keep you motivated to push through the first sets.

World Mosaics 3 doesn't attempt mini-games or laughable gameplay gimmicks. Instead, it's straight-up picross puzzles. And for that we love it!

anyone else get an error and cant play?

what are the system requirements for the mac version?