Are you an adventurer who just can't seem to adventure? Are you a villager whose name is Villager? If so, you'll find the perfect home in Wildhollow, a well-crafted RPG/adventure/simulation game from KarjaSoft, creator of Spandex Force. In this light-hearted, humor-filled game, you play the role of a young boy/girl returning home to find your parents missing and your family ranch destroyed. Don't frown, though, as this game takes itself about as seriously as a clown working at a pie factory. 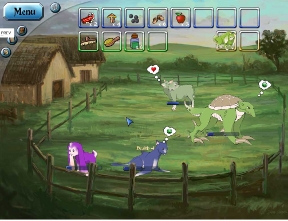 Gameplay takes place in three main areas: clicking around the overworld map, spending time caring for your animals at the ranch, and adventuring in towns, which is equal parts talking to villagers and poking your nose in every corner. Everything takes place on still screens and is handled with the mouse, so if you see sparkles under the cursor, click it and see what happens. Bet it's something cool!

Most of your time will be consumed by completing quests townsfolk send you on. Barber lost his glasses? You can find them. Villager want some berries? I'm sure you can rustle up a few. Missions aren't always a simple A to B to C progression, of course. Often you'll accept a quest but will have no idea where to go or what to do. In these situations, as with any role playing game, talking to people will open up a clue or two.

Apart from all this conversation reading, role playing and adventuring, Wildhollow is also a simulation/farming-type game. Your ranch is accessible from the overworld map as well as a shortcut icon on the menu bar. You can stock the ranch with animals from early in the game, and as you progress you unlock more and more beasts to purchase. Caring for them is a simple matter of keeping their health and mood high, each accomplished with food and brushing respectively. Animals have different food preferences, which is a great incentive for you to head out to go fishing, berry hunting, apple picking, etc. Before long you get to breed animals, which often produces preposterous creatures you'll have the pleasure of nurturing. But hey, that's why we play these kinds of games, innit?

Speaking of gathering stuff, Wildhollow uses an assortment of simple reflex/arcade mini-games to provide challenge when you're working for a reward. Grabbing apples, for example, requires you to charge at a tree and quickly click the fruit as it flies off the screen. Berry hunting is as much luck as it is fast mouse action, and fishing is all about stopping a sliding bar at just the right time. Nothing too complex, mind you, but the contrast between the sim/RPG core of the game and these old-style mini-games is greatly appreciated. 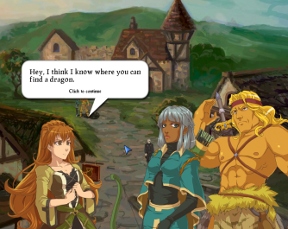 Analysis: Wildhollow is fully aware it's a fantasy-themed RPG/sim, and as such it takes itself about as seriously as games like Ben There, Dan That! and Fairy Godmother Tycoon. Humor is drenched over every conversation, every situation, and every character you run across, from the grumpy town greeter to the blind barber. Referencing modern events and situations is common, as is chipping away at the fourth wall, so prepare yourself for an uncommonly different kind of experience.

Wildhollow is full of little surprises, which is one of the many charming aspects of the game. Statues are scattered throughout the land, sometimes appearing in odd spots during your adventure. What's their purpose? Better nab them all to find out. You can also click seemingly innocent parts of the scenery such as bushes, trees, and barrels, often getting a small cash reward for your curiosity. I love it when a game rewards me for exploring.

Wildhollow does feel somewhat artificially lengthened by forcing you to do a little mini-game grinding to earn cash, but it wasn't anything so bad that I wanted to quit playing. Any "work" is greatly overshadowed by the charming atmosphere and never-too-serious gameplay. You're always aware you're in a somewhat absurd set of circumstances, so those drab moments that set in with some "serious" casual games never find a foothold in Wildhollow.

Before I say HOORAY FOR WILDHOLLOW and send you on your way, I think it's worth mentioning the music and visuals. Most of the character artwork is clean and anime in style, but they're set in front of watercolor backgrounds that could have been lifted from a portrait on your wall. Excellent touch, KarjaSoft! The music, while sometimes stiff and stock in nature, has this lilting sort of charm that almost makes you want to bob your head along with it. If you're the kind of person that would bob your head while riding in an elevator.

It's got captivating gameplay that makes you want to keep pressing on, a great sense of humor with crisp writing, and a visual package that's worth its weight in paint. Wildhollow has all the ingredients of an addictive casual game, and this is one game you'll want to devour over and over again.

I had a lot of fun! The plot was easy to follow, and the game nudged you in the right direction while still allowing a lot of freedom.

This game is really charming, and is fun for the first little bit. But then comes the part where you run out of quests, and you have to just make money - to buy items - to advance the story.

The only ways to do this (so far as I could tell) are to collect animal food and sell it directly, or to raise healthy animals and then sell them for a profit. This wouldn't be too bad, just grind-y, except that the minigames for collecting food are uninspired at best, and mind-numbingly boring at worst.

The worst one is where you have to find berries on a bush, by clicking the leaves to check for berries until time runs out (why looking for berries would be timed, I have no idea). No skill involved, just slowly checking each leaf over 30 seconds.

The other minigames aren't as bad, but are still not what I would call enthralling gameplay. I also found it weird that the art for these mingames was so much worse than the art for the rest of the game. It almost seems like these minigames were thrown in at the last minute.

In the end, I got so bored of the grindiness I had to quit, which is a shame. I really wanted to like this game.

In summary, everything here is great, except for the stupid minigames. I'm hoping for a sequel where they are made more fun, because I would buy that game for sure.

How do you get the toilet paper for the elk man?

I agree with Morne. I liked the game a lot when I wasn't grinding the tenth-plus iteration of a fruit hunt. Your herd animals also seem to get hungry very fast, which means you have to grind out their food or buy it. At some points, you leave the main storyline for many iterations of mini-games so as to maintain your own little homestead. This makes logical sense (after all, no work, no pay, and no pay, no gear) but it's the part of a narrative most stories and games compress because it's of much less interest than the main story.

The game is way above par when it comes to the rest of it, as it's a point-and-click game that makes sense: you don't have to pixel-hunt the toothbrush to give to the zebra who won't come down from the ceiling until he gets it, who then gives you one-third of a key to ... and on and on. No, here you have reasonable quests. Hidden items are definitely hidden, but there's no pixel-hunting. As JohnB mentioned, it behooves you to look around in the usual places (under couches, up trees, etc.) for stuff -- and one thing I like is that just because you can click on it, it doesn't mean you will get something, just that there might be something interesting there, and the game will give a definitive response in either case. The plot makes sense and the main character behaves reasonably. The character illustrations and animations are charming, a kind of anime-meets-Disney. The puzzles may not be difficult, but all in all it's a nice ride through a story and worth paying money for ... except you can't advance without playing the mini-games over and over, and the mini-games feel like a job, not play.

Looks like that artist is getting better and better, but still draws cross eyed people. Huh.

Hey, anyone knows where to find the dwarfs axe?

Right now I am searching for the Axe and how to get squid. Hopefully I A. Find it or B. Find someone who knows!

Love this game! Fun, not too hard. I'm trying to find all the statues. Anyone know where those all are? I think I'm missing three of them.

It's at the bottom of Tranquil Lake. Click on the lake to search it.

You have to have $5,000 and buy the really good fishing bobber/bait in the shop in the town out east (I forget the town's name). Then click on the ocean north of the town and you'll fish up a squid.