Wik and the Fable of Souls

Wik and the Fable of Souls is well-known as a cult classic to some, even though it's only been around for a couple of years. Designed by Reflexive Entertainment, the game was the 2005 Independent Games Festival (IGF) Game of the Year award winner, and it's been one of the company's flagship releases (along with the insanely-popular Ricochet series). Wik was even officially ported to the Xbox 360, a testament to the game's universal appeal. 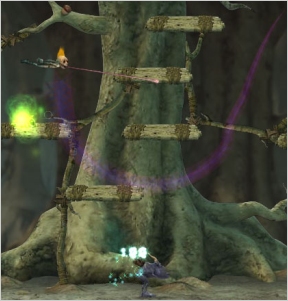 You play the role of Wik, an odd-looking, goblin-like creature with an elastic, frog-like tongue that's capable of latching onto platforms and branches as well as snatching up bugs and other objects. In a nutshell, your goal is to collect grubs with your tongue, then spit them back out to your partner, Slotham. On the surface, Wik might remind you of games like The Great Tree (whose lead artist is the same as Wik's); static yet attractive backgrounds in each level, all tied together in sort of a serene, "enchanted forest" theme. The story isn't necessarily that deep, although there's some nice story and flavor text between each level.

Your task is to move your frog-like character around the screen using nothing but jumps and swings. That's right, you can't walk at all. It's an interesting gameplay concept, one that even experienced gamers won't be able to master right away. In many ways, that's a good thing, considering all the derivative and clones we see these days. There are only two buttons used in Wik: the left mouse button extends your tongue and the right mouse button is used to jump. Alternatively, you can use the [Z] and [X] buttons to control these functions respectively, or you can find a middle-ground like I did and use one on the keyboard and the other on the mouse (especially useful if you're using a laptop without an external mouse). Other than those two buttons, you only need to move the mouse cursor around the screen to guide the direction of your jumps and tongue.

The levels provide many different environments for you to move — and swing — around in. Areas that can't be reached by jumping have to be accessed by latching your tongue onto surfaces and swinging about. You can even build up momentum by moving the cursor back and forth, or after some practice, use the momentum to frantically fly around the screen from ledge to ledge without pause.

In each level your goal will be some variation of collecting the cute little grubs and passing them off to Slotham, a mule-like creature that grabs the grubs and puts them in his pack. You'll snatch the little buggers up by flicking your tongue at one, storing it in your mouth, then spitting (shooting) it out to Slotham. In early levels, you'll have to contend against flying bugs that try to snatch up the grubs and fly away with them. Luckily you can deal with enemies in several ways. The easiest and most obvious is to try and get to the grubs before they do, but this won't always be possible. If you see an enemy bug making a beeline for one of your grubs, you can grab an acorn (or even another bug) with your tongue and shoot it out of the sky. The same principle works even if an enemy has already snatched one of your grubs; you can shoot it down, causing it to drop your grub back down for you to collect. 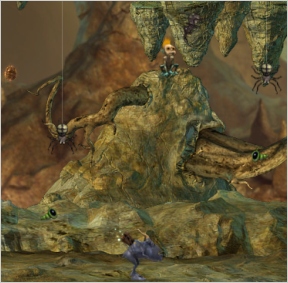 There's a lot of variation in techniques and objects/bugs as levels progress, allowing you to use things like exploding pine cones, filling up your mouth with multiple bugs to use like a shotgun, and much more. More often than not, you'll find that time is your worst enemy, having to collect a certain amount of grubs before it runs out. But instead of an on-screen countdown timer, your buddy Slotham is your timer. He slowly moves from one end of the screen to the other, only pausing to eat the occasional pile of honey on the ground. Luckily you can pick up honey piles as they drip down from beehives and spit them in front of Slotham to slow him down. But if Slotham moves off-screen and leaves you behind, you lose a life. You also lose lives if too many grubs are snatched away from you, as well as a multitude of other factors like falling off into the abyss, eating a poisonous bug and more. Fortunately there are coins and gems scattered around levels for you to collect, giving you extra lives and boosting your score.

Analysis: As mentioned, it'll take a bit of practice to get the hang of this game. The learning curve isn't really that steep, it's more about learning a new play style than you're used to. In many regards, that's what makes Wik such a fun game for a lot of people. Its cult-like status is directly attributed to its uniqueness and innovative gameplay. However, some might be annoyed by the micro-management that's required; having to simultaneously do so much at once. Grabbing grubs, shooting attackers out of the sky, rescuing captured grubs, jumping and swinging into positions, grabbing honey to throw to Slotham to slow him down... it can get a little overwhelming, especially in later levels.

But if ability-juggling doesn't bother you (or you prefer the challenge), there isn't much left in the way of making Wik one of the more enjoyable games you've played this year. Over 100 levels of engaging background graphics (impressive still, even considering the game is a couple years old) and innovative gameplay are offered. There's even a "Challenge" mode that focuses more on puzzle-solving and acrobatics than grub-collecting. The Challenge mode really gives you the chance to jump and fly around like crazy, performing full 360-degree swings and launching yourself to great heights. To really decide if Wik is a game you'll enjoy, it's one of those that you just have to try for yourself. But if you're a regular JIG reader that happened to miss this classic when it was first released, I'm betting you'll enjoy it as much as we have.

Note: Wik was developed when the average onboard graphics cards were a bit less powerful than those today. The game's default detail quality is set at "low," something you'll probably want to change to "high" to enjoy the game's graphics to its fullest, unless you have an older machine.

This game is truly amazing. I must have played the demo three times so far since it was released....why haven't I bought it yet XD

Getting all those gems is a real challenge, and I agree with the review about the difficulty level. I consider myself an experience gamer and it took me a while to figure out and master the game mechanics.

I have always loved the fresh mechanics of this game. It leads the pack in indie gaming, along with Gish, and Gumboy Adventures.

I dunno. I thought this was awful when it came with this XBox Live Arcade sampler disc. I can't imagine it's any better now.

Perhaps the game didn't make the transition well from PC to console. Not many games do, actually.

What was so "awful" about it? Your assessment doesn't really say much at all.

No... the game was a little harder on the Xbox 360 but still was REALLY, REALLY good. I think the issue is that the demo doesn't have the greatest levels in it. I love this game especially the harder levels.

The game got amazing graphics, and also original game mechanics.

Yet I cannot manage to get hot for it. I just cannot pinpoint what it is missing to be my tonic. Maybe its because somehow in the core its just arcade and nothing much more. I closed and deinstalled after 45 minutes of playing. However I think it might be exactly the right tonic for other peoples, possibly.

What was so "awful" about it? Your assessment doesn't really say much at all.

A large part of it was the control scheme, which on consideration, probably is better on the pc, but the art style wasn't my cup of tea and I'm usually not a huge fan of anything that puts me on a timer. So maybe not awful as in technically or creatively deficient, just awful as in I didn't have any fun with it.