Wallace & Gromit:
Fright of the Bumblebees

Are you ready for adventure? Are you ready for mayhem? Are you... feeling a bit peckish? Then grab your favourite brand of cheese and get comfy in your favourite sweater vest. Telltale Games, developers of the equally tasty Sam and Max games, has just released the first adventure in a new series plucked straight from the popular British cartoon and movie. Wallace & Gromit: Fright of the Bumblebees is the first in a series of episodic adventure games, and it's point-and-click gaming at its finest with everyone's favourite cheese-loving inventor and his beleaguered pooch. 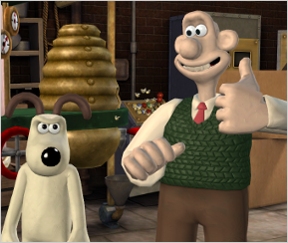 Wallace & Gromit are entrepeneurs, of a sort. Wallace is continually applying his abstract inventions to new business ideas, and his latest is honey — "From Bee to You". After breakfast one morning, Wallace is commissioned to produce fifty gallons of the stuff for an event to be held that night — a tight deadline even if he had more than one hive of angry bees. Wallace being Wallace, he comes up with a scheme to produce an enormous amount of honey in a short amount of time, but he's neglected to take into consideration that science and nature don't normally mix.

Depending on where in the story you are, you'll have control of either Wallace himself or his long-suffering canine companion, Gromit, both of which can walk around using the [WASD] keys. Move your mouse over an object and if white brackets appear around it, you can click to interact. Using an item is as easy as holding shift to open your inventory, clicking on the item, and then clicking again on who — or what — you want to use it with. Make sure you come back and check on items when you switch characters, too, as Wallace & Gromit interact with things in different ways.

The hints and walkthrough on the official site definitely come in handy from time to time. A lot of the puzzles are abstract to say the least, unless you're one of those people who instantly knows what to do with a badger, a tennis racket, and a stick of butter. Since the game generally tries to provide items to you when you would need them, however, it scales back on the frustration of other adventure games which have you trying to use an item over and over throughout the course of an entire game. In general, the puzzles are more diverse than the standard bring-this-item-to-this-character variety; when was the last time you had to use advertisements to craft a suitably scathing insult? 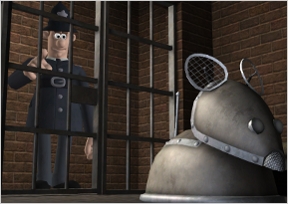 Analysis: Fright of the Bumblebees is just beautiful. Let's get that out of the way right now. I spent a great deal of gameplay just marveling at how gorgeous everything was and how near-flawless the animation is, shot from every angle. The titular characters are lovingly rendered so close to the original series that their designs even incorporate little fingerprints and cracks to make them resemble the clay sculptures. The game is packed with the show's signature style and unique appeal, down to the so British voice acting (Wallace himself is voiced by the official backup actor, Ben Whitehead) and the roly-poly orchestral soundtrack. The spoken dialogue is only in English, but subtitles are available in several languages. Gromit's expressions, of course, need no translation. The downside is that this means older computers might have trouble running it smoothly, so make sure to check yours against the specifications.

Wallace & Gromit is one of those things that you either get or you don't, and the appeal of the series' goggle-eyed characters and their implausible adventures is largely dependent upon your appreciation for unabashed silliness. If you can accept that a dog can grow a prize-winning giant cucumber, or that a man can have his brain swapped with a rabbit, then you'll do just fine. If reading that sentence caused your brow to furrow, you might encounter difficulties. The game is a lot of things, but serious isn't one of them, and the very British humour is much more dry than everyone might be used to. The jokes are kid-friendly, but not so watered down that adults won't get a giggle or four out of them.

As the first in a planned series of four adventures to be released monthly, Fright of the Bumblebees is, in my opinion, worth every penny so far. The price of which includes, incidentally, the three upcoming adventures as well. Often games that are based off of established shows tend to feel very commercial, or just consist of a basic gameplay system with token nods to the source material. By contrast, this game feels like a real labour of love. If you've ever wondered what butter has to do with catching squirrels, or where Strongium comes from, you owe it to yourself to check out this game. And even if you haven't, it's still worth a look.

I'm about halfway through I guess and haven't needed to consult a guide or anything yet. For now I find the game easier than the Sam & Max games. Also less funny, but perhaps we've been spoiled by Sam & Max or some of the humor just escapes me.

I look forward to when Telltale starts caring about Mac-users. I tried one of their games with CrossOver Games once and got no positive results.

It not difficult at all. The humour is there, maybe it's easier to see it when you've watched enough Wallace and Gromit movies :-D
There are a few glitches here and there (like animation glitch when interacting with the hanging plate, dialogue inconsistency and continuity bugs).
Overall enjoyable - especially if you liked the cart... claytoon?

When the tea bag fell on Felicity's chest, and the Gabberleys' shouting match.

Even the cartoons were funnier than this. Maybe I'm not British enough.

Mac users beware: the full version of this game did not work for me with CrossOver Games. This might be significant in that the demo worked fine, leading me to believe that I might get lucky with the full version as well, but no. I'm hoping that Telltale will be up for helping me out with a refund...

@Brandon: I'm British and didn't find it too funny either, so I don't think it's that.

I liked the W&G shorts and film, but I'm not too impressed with the game if I'm honest. I liked Sam and Max by the same team though.

@abfdrumz: I think it's something to do with the type of piracy protection they use, going off what I've seen people saying on their forums in the past.
They do seem to have good customer support so they might be able to sort out a workaround, but I wouldn't get my hopes up.

I like Wallace & Gromit, and I wish the game worked for me. Sadly, it doesn't really. I installed the free demo (Windows Vista), let it do its DirectX tinkering, restarted the computer, and all of the text snippets show up as multi-colored rectangles. Kind of unnavigable. Plus, I don't really like using the sound because my husband doesn't like computer sounds (I could bring home the headphones that I left at work), so I would need (functional) captions to play. And I am really too busy right now to mess with it and try to make it work. Oh well, I guess I'll pass on this one. Do make sure the free demo at least works before buying (though I see above that doing that isn't even sufficient).

I *was* able to get W&G working on a Mac under Crossover. (Fortunately, as my PC's power supply was a paperweight for a few weeks there.)

It was a slightly rocky path -- I think I had to quit and restart after I entered my license code. And the thing threw a spurious "thread crash" dialog every time I started it up, which I had to close. But it continued running and played fine after that.

As for the game itself, I agree that it was on the short and un-difficult side, and the humor isn't as energetic as the Sam&Max games. However -- Sam&Max season 1 episode 1 was *also* somewhat shaky. It took them a couple of episodes to get the puzzle balance right, and also to build up the running gags and game conventions which gave the series its depth of play.

I expect the same will be true here. My biggest complaint is that you can't buy the episodes a la carte. They're asking people to commit $35 on the basis of a demo and, I guess, their fond memories of Sam&Max.

I haven't played it yet, but from what I've heard the first half of the game is essentially a walkthrough designed for people who have never played an adventure game or have any idea what it is, but after that it gets a lot better and more challenging. However, since I haven't finished S&M season 2 yet, I'll probably wait a while for getting this.

Oh yeah, also like the Strong Bad games, we can hope they get better after the first game (the first Strong Bad one was rather a bit of a pain to get through but after that it got much better).

OrigamiMarie, try turning the graphics quality down to 3 or below and see if that fixes the problem you're having. If not, you can write in to [email protected] and a member of Telltale's QA team can try to get to the bottom of it for you. This isn't a problem that's been reported before so there's a good chance it has something to do with your video card / drivers or something else specific to your setup. It would be nice to figure out what's wrong, if we could!

@Dan, @Andrew, thanks for the insights on the Mac angle. I still wasn't able to get it working under CrossOver, and Doug from Telltale mentioned that he had had trouble as well (though he indicated that it "runs pretty nicely under VMWare Fusion and probably under Parallels as well," if you have access to those products). Telltale was also up for the refund, which was cool of them.

This might just be me being thick, or a glitch or something but I can't actually get past the tutorial with Gromit and the chess playing machine. I've picked up the queen statue and the cheese, interacted them with everything but nothing's working, so I'm just stuck. Help?