Science has proven that water physics are some of the most entertaining gameplay mechanisms ever created. Forget things like realistic friction models, voxels, endlessly generating worlds, and being able to rewind time. Capturing, deploying, and just messing around with gooey water is where it's at. Vessel, a new steampunk puzzle platformer from Strange Loop Games, builds most of its gameplay around liquids, using them as both mindlessly flowing matter and as something you probably never expected water to do: become semi-intelligent! 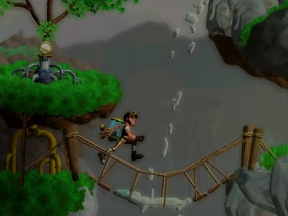 Let us introduce to you Fluro, the liquid automaton invented by M. Arkwright. In essence, a Fluro is water (or another liquid) gathered around an intelligent "seed" that takes its own humanoid form, able to walk, think, and interact with objects in its vicinity. Work performed by a Fluro is flawless, and they never get tired. Even better, if a Fluro is injured, the form can be rebuilt using nearby liquids. In short, if you've got work to be done, you should consider Fluro.

The Fluro, however, get a little out of control, and if Arkwright is going to finish his greatest invention — a building-sized creation known as The Accelerator — he's going to need to get things running smoothly again. Apart from the usual movement and jumping skills, Arkwright also gets a backpack capable of storing and spitting out liquids in small streams. He also picks up Fluro seeds that are hydrophilic and will form living Fluro if given enough liquid. With all that at your disposal, it's time to go solve some puzzles and get this thing working again! 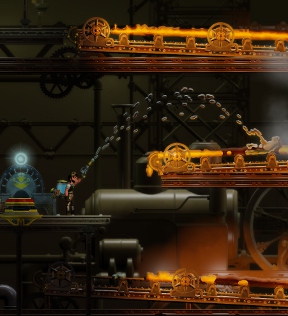 Analysis: Vessel is the kind of physics platform game you love to scratch your head over. The game is divided into different furnace rooms which are connected via dark tunnels and ladders. You can also hop between rooms by clicking icons on your map. It makes for a very open, free-feeling experience while allowing you to focus on tasks at hand. You'll never feel stuck, which is vitally important in a game like this.

Great steampunk visuals and a gorgeous dynamic soundtrack (by Jon Hopkins, no less)? Check! Everything looks a little dark at times, but it's fitting, and the liquid monsters you encounter have a lot of personality. Vessel does suffer, however, from a common problem many physics-based platform games succumb to: floaty controls. Jumping, moving, climbing ladders, etc. can be terribly imprecise at times, something that isn't really a problem as much as it is a mild nuisance.

All in all, expect almost a dozen hours of gameplay out of Vessel, which feels like just the right amount for a game of this type. The puzzles are perfectly balanced to make you feel clueless then triumphant, and the gameplay complexity slowly increases as you play. An excellent debut from indie studio Strange Loop Games!

Windows:
Download the demo (only available through Steam) Get the full version (scroll down to purchase)

The link doesn't work? But it does look great indeed. Please fix it, eager to find out what this is about!

okay, must have been my fault. it works... you tube trailer looks splendid, sure to check this out