So it's October, that most magical of months, where a young gamer's thoughts turn to vampires and murder, hidden objects and point-and-clicks. No use denying it, we have statistics here that most certainly were not made up. Vampire Saga: Pandora's Box fulfills all of the above requirements, as it starts off a new series. You receive a frantic phone call late one night from your grandfather, panicked, ranting about a woman... a woman he says he shot. But that's crazy! He'd never actually hurt anyone... would he? You'll soon discover that the past has come back to haunt your family, and will find yourself investigating a strange ship at sea. Where has the crew of the Pandora gone? And more importantly, what's in those crates? 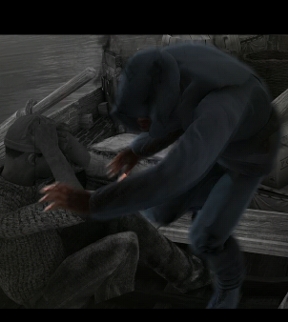 You'll explore the game by navigating with your mouse. A magnifying glass icon when you move it over an area means you can click for a closer look, and a winking light means you can interact with something. Move the cursor towards the bottom of the screen to bring up your inventory, and you can click on an item, then on a place on the screen to use it. Most importantly, you'll be watching for areas that shine with a strange, rippling purple light; clicking on one of those will activate a hidden-object search.

For the most part, the hidden object scenes are done well. Something of a relief, since you'll be seeing most of them more than once. Items blend in well, though not unfairly, and there were only one instance of what felt like a case of "lost in translation", where a "dolly" turning out to be a pile of rolled up towels. If you say so, Vampire Saga. Then again, this is the late eighteenth century, so one can always assume children back then were forced to make do with whatever was available. Don't imagine Mattel was around then.

If you're looking for a brain teaser, Pandora's Box probably isn't for you, since most of the puzzles are simply based around using items in the right places. And, happily, they're pretty logical, if some are made a little more complicated than they need necessarily be. If you're stuck, you can click on the hint button in the lower right when the time has refilled, and your inventory will glow to show you which item you should be using.

Fortunately, most of the game is lovely to look at. A lot of effort has gone into painting the often gloomy environs, from the way dust motes dance in a beam of light, to the shadows cast by a flickering light. It's an odd blend of hand-drawn art and computer rendered visuals, but for the most part it works. Well, all except for the people, who make you wish they'd gone with more of the actual art instead of stiff-looking rendered models with thousand-yard stares. 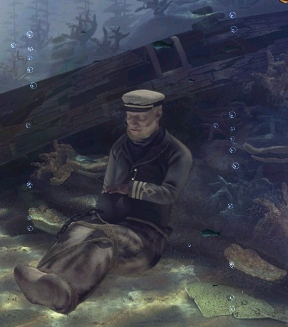 Analysis: Okay, so vampires don't exactly strike terror into anyone's heart anymore. You can point a lot of fingers to assign blame, but whatever the source the fact remains that these days vampires are more typically revered as icons of tragic romance than, oh, say, monstrous creatures of the night more interested in blood and fear than poetry. As it happens, Vampire Saga: Pandora's Box winds up sort of straddling the middle ground, decidedly more Bram Stoker than Anne Rice, although admittedly a little more ham-handed in the execution of dialogue than either.

For the first half of the game, that story is told at a decent pace through your grandfather's memories. In the beginning, the game does a very good job at establishing atmosphere, both with moody visuals and, in particular, audio; the sound of distant footsteps, the soft creaking of a ship, faint whispers you can't... quite... make out. There are some genuinely eerie scenes, and it goes to great lengths to foster a sense of dread as you investigate your surroundings.

So it's a bit unfortunate that the latter half of Pandora's Box feels like it's been padded for length by too much back-and-forth. Why should you have to hunt down six individual bullets instead of simply finding a handful of them in a single scene? Sure it would have been "easier", but it also would have been less tedious. It breaks up the narrative when all you want to do is find out what happens next.

While hidden-object enthusiasts may find it a little short, around the four-to-five hour mark, Vampire Saga: Pandora's Box sets the stage for an interesting new series judging by the cliff hanger it ends on. If vampires are sacred ground and serious business to you, Pandora's Box may not be your cuppa. But for those of us who know the bloodthirsty undead are best enjoyed with a big heaping helping of cheese, Pandora's Box is an easy but enjoyable game to help kickstart the holiday season. Who needs pumpkins and black cats to feel festive when you've got fangs and murder at sea?

Notes about the Game

Getting in Grandfather's House

Dive and Open the Captain's Desk

Load the Gun and Discover Laura

Find the Music Box for Grandfather

Special thanks to Eileen for this awesome walkthrough :D \o/

Good length, good gameplay, good graphics, storyline and navigation. A lot of recent games are learning from Ravenhurst 2 which is a positive thing. It's a slow but steady progress back to early adventure games that didn't involve 3D nodes and 3D movement, but when each screenshot told a specific story element and had minimal inventory. That I can appreciate.

It seems like yesterday we were talking about last Halloween.

Is anybody else having issues with downloading the demo for Windows?

Notes about the Game

Getting in Grandfather's House

Dive and Open the Captain's Desk

Load the Gun and Discover Laura

Find the Music Box for Grandfather

Special thanks to Eileen for this awesome walkthrough :D \o/

D: I downloaded the demo, but my cursor won't show up on the game. It worked for the previous big fish demo game you guys featured. :l

[Edit: You should submit a trouble ticket to Big Fish Customer Support: -Jay]

My mouse isn't showing up in the game either :(

How do i put the sceptre in the dead guys hand? won't let me drop it anywhere in the boat!!!

help, i have put the fuse in the compressor but, when i hit the green button it tells me its still not working ?

never mind, i finally figured it out.

p - 6th bullet
Please have a look at the top of the comments. Below the spoiler for the walkthrough you will find a spoiler with a list of all items and where to find them.

p - 6th bullet
Please make sure, that you have done everything, that has mentioned in the walthrough before. Often little things trigger ho-scenes.

When you are sure, that you missed nothing, please contact the customer/technic support of the vendor, you purchased the game from. They might be able to help you.

please help me im stuck at the very begining i need too find the old mans asprin and i cant find it and have nothing left too do n e where :((

I am at the side of the ship and want to scuba down to find the captain. I have the scuba gear from the captain's cabin but it still won't let me descend! I went to the walkthrough to confirm I hadn't missed anything (which I can't see that I have). What am I doing wrong?

lupinegoddess - what you need to do is

Fix the compressor - it provides air to the scuba gear. Once that is fixed you need to attached the diving gear to the tubing near it, and that you'll be able to dive. It's explained more in the walkthrough.

I got to the point where grandpa wants me to enter the bedroom. However, the furniture won't move. I've clicked and clicked and clicked on it and I keep getting the message "what happened that scared grandpa that he blocked the door?" (something like that). Any tips?

Could you please help me?
I'm in the second cargo hold aboard the ship and I've used all four of my skull keys but only three skulls appeared and when I click on them nothing happens.My keys are gone and nothing is happening.
Please help.

Help! How do I get the hook to latch onto the crate, please?

Just picked this up and had the non-showing cursor problem. I am using Windows 7 64 bit. I did some looking around and found an easy fix that worked fine. Fix is go into your control panel to Mouse and click Pointer Options. Click on "show location when I press CTL key" and apply. When you start this game and don't get the cursor, use the Ctl key to show where cursor is and go to Options and highight it and click on that. Uncheck the custom cursor and go from there. You will get your regular cursor and be able to play just fine. Its a cumbersome fixe but enabled me to play this and now am enjoying this game! Good luck to all...

i am stuck with how to hook on to the crate, and to how i come across the oil. I have touched the hint button and all i get is nothing to do in here, i get this in every room i go into. Please help me!!!!!!

Sarah -
There is a walkthrough above highlighted in blue. It should help with the crate, and it also has a list of where you can find everything.