It all begins with an innocent little robot drifting through a leaky cave. It all ends with... well, a lot more than that. Talawa Games' Unmechanical is a physics-heavy action puzzle game where you control a round 'bot flying through an underground factory, trying to find his way back to the surface. It looks like something unsettling happened here not too long ago, judging from the rockslides and blocked passages and all. But you don't have time to hover and ponder, you just want to get out. And as you soon discover, you're not exactly alone down here... 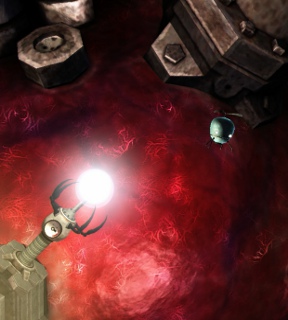 You have one ability in Unmechanical: a short anti-gravity ray. This beam emanates from your underside, activating with the simple press of a button. With it you can tow certain objects around the level, carrying and placing them on switches, dropping them down chutes, using them to block moving objects or bridge gaps, and so on. It's more than simple "drop rock A on rock-shaped slot B", and you'll have to do some experimenting with some unusual biomechanical contraptions to figure out exactly what needs to be done.

Analysis: Shh. Don't tell anyone, but Unmechanical is actually a pretty great game. Wait, on the other hand, do tell everyone. Nothing about this simple outing screams "triple AAA title omg buy it twice", but then again, good indie games don't always need fireworks in their press releases or explosions on the title screen. They need a simple but smartly executed idea, they need intriguing puzzles, and they need to look good. Unmechanical meets those listed requirements and takes a few steps beyond, and there's no reason it shouldn't occupy a space on your virtual games shelf. 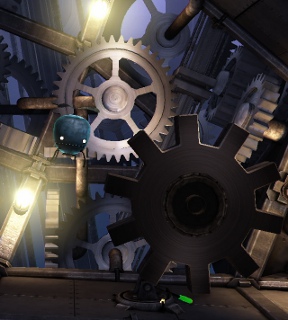 The puzzles in Unmechanical built around familiar mechanics everyone should recognize. They walk a careful line between trite and intriguing, oftentimes stepping too far into the former's territory. Subsequent areas always make up for the predictable puzzles, though, so you'll find yourself quickly forgiving the game and falling right back in to loving it to pieces.

Unmechanical features about five hours of gameplay, give or take depending on your l33t gaming skillz (I apologize for typing that). There are two endings to discover, and even though the plot is somewhat thin, you'll still want to view them both. The challenge level is on the easy side, but the game goes to extra lengths to provide a sparse but atmospheric experience, so extreme difficulty wouldn't be very apropos.

Unmechanical is quiet and unassuming, but it's a game that succeeds at what it wants to do. The emotional connection you feel for the main character comes out of nowhere, but you'll be rooting for him the entire time. Don't let anything stop you from giving the game a try, you just might find yourself enjoying, like, a lot, and stuff!

Windows:
Download the demo Get the full version (via GOG.com)

Is there an easy way past the second of the two "Helicopter"-style minigames? I'm having serious problems with it due to poor hand-eye coordination - not much else in the game requires that kind of skill.

OK, after quite a few tries, I got through it. And I've now completed the game.

Loved the atmosphere. Wish there was a way through the door near the end that scans you, but I suspect that's there for atmosphere only.

OK, found ending #2. Tried that before but didn't spot the gate opening.