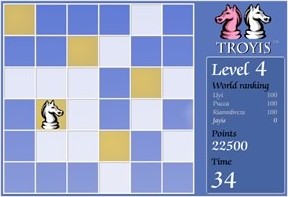 An action puzzle Flash game played with knight moves from the game of Chess, Troyis is a new casual Web game created and designed by Guillem de San Pedro of Spain.

The object of the game is simple: fill all of the white squares of each level by landing on them with the knight using only valid moves from the game of Chess.

A valid knight move follows the simple pattern of "forward two squares, over one." Forward can be in any direction, and over is right or left relative to the forward movement. Imagine an "L" shape move in any orientation, even backwards, except for diagonal.

Control is with the mouse. Simply click the square on which the knight will land when completing a valid move. You may only land on white or previously visited squares.

A timer counts down for each level, with the game ending if all white squares are not landed on within the time alotted. Your final score is automatically saved and ranked among the other scores submitted by people from around the world.

An elegantly simple yet challenging casual Web game, enjoyable for gamers of all ages.

This is a really fun game. Simple, easy to learn, but really difficult to do with the limited time ammount.

Level 10, 253410 points, #2362! But now it's bedtime. I really, really enjoyed this game, though. Partly, I think, due to the fact that it's a rewarding game in that you can really notice you're rapidly getting better with practice as you learn to recognize patterns and how to get from point A to B under various circumstances.

excellent game, and as well as having a catchy name. = )

Great game. Simple concept which gets very challenging as the levels go up. My best score so far is 333930 which ranks me at 906. I think I have a chance of breaking into the top 500.

I think I'm addicted to this game.

Those are pretty amazing scores, Paul and Travholt. I can't seem to get past level 8 now. Top score so far is 155320.

I don't think I'll ever be that good, Paul, though I am improving.

got within one square of beating level 8. That got me to #6866 in the world - I'm pretty chuffed with that.

nice game...took me a few times to realize you can go back onto spots you've already hit. I thought you had to do it all in one long track. Only got to about level 4 doing that, haha.

I dont think the levels are random (I could be wrong). So, you could take screenshot, solve it with as long time as you need and then enter all the moves very fast next time for the high score.

I didn't play some of the earlier levels as well as I should so I probably lost a few thousand points there. I think the size and complexity of the levels stops increasing after level 11. The only variable becomes the time limit which is decreased by 1 sec/level. So knowing that I cleared level 15 with 4+ seconds to spare, in theory, I should be able to beat level 19! In practice, it might be a while before I get there :)

Tonypa - I thought that, too, at first. I have played it enough to know that the levels are indeed randomly generated, even though the first few don't seem to be.

I'm guessing that the level creating algorithm is basically a knight going along the board for however many moves and never landing on a space it's already landed on. This would mean that for every level there is a path you can follow where you don't have to backtrack, and since the number of moves remains the same for each individual level in varying games can only result in a few possible boards for the low levels, which may make them appear not so random.

At this point, it seems that the main way for higher up people to improve is go faster - consistently.

hell of a lot more entertaining than i imagined anything involving chess *could* be. clean, simple, fun. serious productivity drainer at work.

My biggest problem is getting stumped on certain tiles (usually 1 or 2 per level). I know the basic maneuvers for getting from point A to point B sub-consciously by now, but sometimes the board is missing the necessecary tile spaces and the basic maneuvers won't work. Instead you have to follow a convoluted path consisting of several steps to get where you want. Figuring this out consumes valuable time which can be the difference between life and death.

So did you get bored with the game Tiralmo?

Maybe...
I get distracted, redistracted and distracted yet again fairly easily...
I'm sure I'll come back eventually though.
Now off to a random cryptology website I know of!

A little late to the party, but...

Ugh, now you have to pay for it to play full.

really good game, first time ever play it, got 702 in the world, don't remember the score but i'll try to improve

after level 9 my remaining start time keeps dropping every time a new level starts. 40 35 30 then 29 28 seconds. My son plays on his computer and he gets 45 seconds on every screen.
Does this happen to anyone else?