A crazy, multiplayer romp through a visually lush game featuring three moderately-mad fantasy characters with their own unique abilities? Show us where to sign! Actually, now that you mention it, Trine 2 happens to be all of the things described above, plus a whole lot more. It's got action, it's got physics puzzles, it's got both single- and online multiplayer modes, and it's got a sense of humor that will probably remind you of Magicka. It's a modern-day version of The Lost Vikings, and any gamer will be proud to experience the world Trine 2 has to offer! 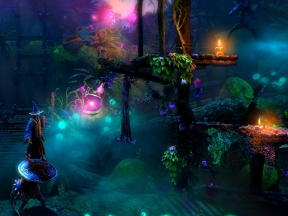 Trine 2 is built around three unique characters, each of whom can be controlled by a human player or switched back and forth via the keyboard. Pontius the knight is strong and resilient, packing a few weapons to deal with enemies and a shield to keep everyone safe. Zoya the thief is fast and agile, able to grapple and swing from distant platforms as well as fire arrows from afar. Amadeus the wizard may be weak in stature, but his spells allow him to conjure platforms, crates, and other devices, as well as manipulate enemies and certain pieces of the environment using his telekinetic powers. It's a rag-tag bunch, for sure, but somehow they all work together to get the job done.

Working through levels in Trine 2 requires each character's abilities, and more often than not there are multiple ways to solve each puzzle. For example, if you're after a piece of shiny high atop a ledge, you can use the wizard to create a platform, have the rogue grapple up top, or maybe levitate something (or someone) to the desired location. There are also fire and water elemental puzzles to work with. With multiplayer games, your options are even more diverse since characters are active simultaneously. By collecting orbs you also gain levels and can unlock new abilities, some of which will completely change the way you play the game. 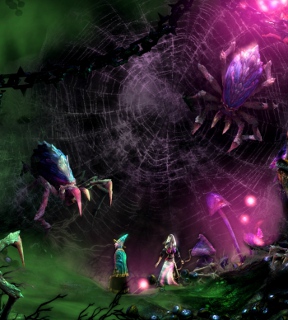 Analysis: If you skipped the first Trine game, you missed a fine introduction to this growing series of puzzle platform games. No knowledge of the original is required to enjoy the sequel, though, so feel free to dive right in, especially since Trine 2 is the only one of the pair with online multiplayer. The story sticks with a basic fantasy-driven loot-driven fairy tale plot in both games, so you won't feel lost or anything!

Apart from its well-tuned gameplay and gracious inclusion of multiplayer modes, Trine 2 comes with something not everyone expected from a smaller indie studio: stunning, high definition graphics. The screenshots you see pale in comparison to seeing the game in motion, and it's worth grabbing the demo just to see some of the environments move in real-time. Lively foregrounds, looming backgrounds, large character animations, and lighting effects that belong in an art gallery. It's distracting it looks so good.

If there's anything negative to say about Trine 2, it's pretty much just nitpicking the details. The physics, on occasion, are spongy and imprecise, but since the game rarely requires exact movements, this doesn't really get in the way of things. It does, however, open up the trusted can of "jigger your way out of every situation", especially using the wizard's physics-defying levitation abilities. But, this ends up adding to the game's charm, turning multiplayer matches into wild "let's see what we can do" romps through each level.

Trine 2 is beautiful, features loads of good physics puzzles, and is filled with personality despite its reliance upon stock character types and story elements. It's a good game to play on your own, but if you round up a friend or two, suddenly it becomes mind-blowing crazytime fun.

I got Trine 2 on its release and I loved it beyond compare. The art is absolutely stunning, and it's not just a one off hit at the beginning, it continues to amaze you throughout the entire game. Co-op/multiplayer is easy to use and nicely customisable, however one thing I would slightly complain about is the length - I'm sure I heard/read somewhere that it is supposed to be '40 hours of gameplay' and I can only agree with that on the basis that you spend 30+ hours looking for every last experience orb after you've completed the initial story. However, overall an unbelievably great game and totally worth the buy.

Yeah, I wouldn't say 40 hours of gameplay, maybe half that for most players, less for awesome video game masters who charge from beginning to end. Still, every minute of it is just stunning, and it's so much fun in multiplayer!

Also, a little tip for people starting new co-op games: if you turn on simultaneous character selection (which allows people to switch characters freely instead of restricting it to one of each class), you can't change back afterwards, so be warned. Things are much easier with the restrictions off, but it almost feels like cheating in a way...

I've got 7 hours on Trine 2, and I've completed the game without rushing ( that's something I really despise ).

So, 40h+ of gameplay is a bit too much ; I might not have searched every crank and nook of every single level, but I got nearly all the experience orbs. I wouldn't say I'm a ' video game master ' at all, but let's say that 15h is way enough to 100% the game.

Kitu: I played co-op and spent around 20 hours. We weren't 100% thorough, but we did our fair share of exploration and just plain messing around.