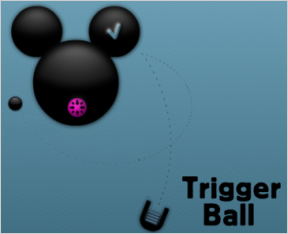 Occasionally, a game may appear on both of these lists. One of the very first to do so was Tyler Glaiel's Magnetism, primarily because it contains 100(!) levels of ball-bouncing, magnetic field-inducing madness. Now, Vadim Ledyaev channels the spirit of Magnetism with Trigger Ball.

Complete a level by bumping each black orb with a smaller black ball, which is launched with a click of the mouse. You only get one shot, so use it wisely! Use your mouse to set the trajectory, and use [left] arrow and [right] arrow to adjust your starting position, if you are allowed that luxury. A check-mark will appear on each orb after it's been struck, but another hit will take it away, and all orbs must be checked before the level is complete! Trigger Ball is more than just a game of angles though, as you'll find yourself dealing with centers of magnetism, both attractive and repulsive. Later levels also add moving targets, as well as moving magnets. Scoring is a bit unusual—you earn points equal to the number of the level, but you lose one point for each shot you take. This equates to a kind of convoluted way of keeping track of the number of shots, but it works. Presumably, you lose the game if you run out of points, but the beginning levels are so easy that this becomes a non-issue.

Ever since Magnetism (and probably before, too), the concept of using attractors to guide an object to some goal has been used numerous times, and despite having a different goal and a somewhat unique launch method, Trigger Ball feels much the same as these other games—not that there's anything wrong with that. I must admit, despite my affinity for strategy games and games that put the user in control of as many aspects as possible, there's a certain pleasure to be had in just letting go and placing yourself at the whim of gravity. On the other hand, some levels here take this concept to an extreme—sometimes you can walk away from the computer, prepare the caffeinated beverage of your choice, and return to find that ball still whizzing around the unpassed level.

The level design in Trigger Ball tends toward the simplistic. Everything—balls, orbs, magnets—is circular, which both unifies and limits the game. Collisions between convex surfaces magnify differences in trajectory, thus making it harder to find that sweet spot that wins the level. Although it would add a small amount of clutter, I'd like to see more variance in the shapes and collisional properties of the goals and obstacles. Or maybe it's just the night-owl in me pining for a more Magnetism-like experience; after all, with just 41 levels, Trigger Ball isn't likely to keep anyone playing long into the wee hours. But I bet you'll wish it did.

I dont think "You only get one shot" is completely true. You dont have to hit all balls with one shot, you can use several shots to hit each target.

Tonypa, the checked balls clear every time I shoot, is that not the case for you?

Is there any way to avoid having to start at level 1 every time?

Aaaah! I was going along quite well for many levels and about 3/4 hour when I accidentally hit "submit score". Now I can't get back to where I was and continue. Not going through that again. Pretty fun game, although quite a bit of luck/ patience, combined with a bit of practice.

The lives mechanic pretty much kills the enjoyment for me. The player doesn't necessarily have much of an idea what the physics will be like on any given level, and I'd like to be able to play around with that rather than feeling frustrated when I misjudge. It's nice being able to see your past attempts, though.

Lizard - Is your concern that you're going to run out of lives? Because they rack up so fast, I honestly think you'd have to specifically try to run out.

I can see how it might seem like you're being penalized for experimenting with the physics on each level, but I would argue that it's no different than counting your shots up from zero -- the order of the high scores table would not change, only the numbers and the fact that the lowest scores are the best.

I came here to post what smj said, I got kinda far then decided to fire the ball backward and see if that would get me more speed, but not paying too close attention, that little submit score button was where I clicked and now I have to start over. Not worth it, Boo indeed.

I would never want to submit a score if I haven't died or completed the game. Too bad there's no level select option.

Also, the lives are not an issue.

Yes, I realize it's almost impossible to run out. But why even have them in the first place? Isn't having a high score table enough to satisfy those who want a higher level of challenge?

I might not even mind so much if there was just a counter on the corner of the screen rather than a message every time you fail a level. I want to try again and succeed, not have to wait while being reminded that I just missed.

The "lives" in this game are kind of irrelevant, but seeing the little "you lost a life" messages doesn't really bother me. The lives are just points. No big deal.

I thought the game was pretty fun but not a lot of replay value for me. I played through a second time to better my score, but I think I'm done now.

Also, I dislike having buttons (like Submit Score) in the play area.

Cute game, but a lot of levels feel like pixel hunting rather than puzzle solving. Lack of a "save progress" feature means I won't be giving it a second try any time soon.

I agree with DougG - sometimes the difference between right and wrong is a few pixels.

And it severly lacks a 'save' feature

I'd like to see a distance-based score metric introduced. If I get a nice long shot that orbits the board 200 times, I should get points for setting that up. I've seen that in other gravity/magnetism/strong nuclear force based games.

Phew, I managed to reach the end without any of the problems mentioned by previous posters. I completely agree that I would be frustrated if I had to start over in a game such as this, whether by running out of lives, closing the game or clicking the "Submit score" button.

Such problems aside, I did enjoy the game quite a lot. I like the fact that your lives increase so rapidly yet also count as your score. It allows you to experiment, giving a lot of room for error while still very loosely keeping some pressure on. I feel this adds to the casual feeling of the game, and helps to stop it being stressful. That is, of course, unless you actually do use up all your lives and have to start over.

Anyway, my final score was 671, putting me at position 171, apparently. Woohoo.

Im not a big fan, the design surpasses the gameplay, which is very bad.

This game is much more about feeling than about thinking. No precision, just "flair", I thought.

There's no video walkthrough yet. It could be a good idea to create one for our desperate friends (and I've been desperate in the middle of the game... some levels took me like 20 tries to match...)

I might just be stupid, but I can't do level 7, any help?