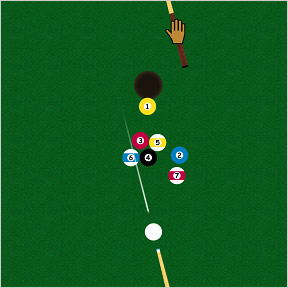 No, I'm not talking about the game developer behind such titles as Carmageddon TDR2000 and Shrek Smash and Crash Racing. And no, Donut Games did not change its name in order to attract a more intellectual crowd.

Torus Games from Jeff Weeks and Geometrygames is the name of a free downloadable set of 8 simple games for Windows and Mac that, rather than being played on a 2-D plane, are played on the surface of a torus. Here you will find a twist on classic games like tic-tac-toe, pool, Minesweeper (called Apples here), and even a bizarre version of chess.

But what exactly is a torus and why do these classic games suddenly play differently on the surface of one? Glad you asked! Simply put, a torus is a fancy mathematical term for a donut. If you want to get technical, it's the 3-D locus of points that are some distance X away from a circle (provided X is less than the radius of the circle and probably a couple other technical yadda-yaddas too). What this means is that the surface is never ending, and that you can do some neat wraparound tricks with these games. 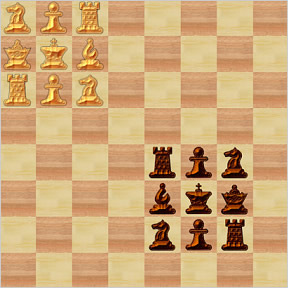 While it might be nice to actually see the torus while you play, in reality it would probably be pretty clunky to work with and would take a Herculean programming effort to pull it off well. Instead, the surface of the torus is transferred to a 2-D plane, where the playing field wraps around both vertically and horizontally. If you prefer, each game can also be played using a tiled view, where the game board is replicated on each side, saving you the mental difficulty of trying to figure out the wraparound yourself. This is especially helpful for judging angles when playing pool. Incidentally, you may also choose to play each game on the surface of a Klein Bottle as well. The difference is that the vertical wraparound is also reflected about the vertical axis

Although it's kind of neat to play jigsaw puzzles or word finds on a torus, these and most of the included games are best described as nice diversions. However, two games for which the torus shape significantly changes the gameplay of the original are pool and chess.

Pool is a scaled-down version of 8-ball, with three stripes, three solids, a black 4-ball, and a single pocket. On your turn, move the mouse to change direction and power, then click to shoot. It may take a while to get used to the fact that there are no rails, and that you can use the wraparound to shoot at a ball that might seem to be blocked off from you.

Chess might seem scaled down at first: you start with just a king, a queen, 2 rooks, a bishop, 2 knights and 2 pawns in a 3x3 square. However, since the rook, bishop and queen can now wrap their moves around the board, their attack capabilities are greatly increased and the game morphs into an offensive showdown where you do your best to keep your opponent in check and off guard. This one is especially crazy to play on the Klein Bottle!

Best of all, there are multiple difficulty levels for most games and the option to play against a friend. So search out your inner geometry geek and gear up for Torus Games!

I don't get the fourth dimension! The Klien bottle is confusing! I do get that each dimension is perpendicular to each of the ones before it.

No 4th dimension here! Just a very disorienting 2nd dimension. The Klein Bottle games confused me too at first (and they still do if I don't concentrate enough). I find it is particularly helpful to look at the tiled version for the Klein Bottle surfaces.

hmmm... now that I look again, maybe you were talking about the Klein Bottle visualization on the Wikipedia entry. In that case, yes I agree, it is very difficult to visualize 4-space when you're so used to 3 dimensions.

I love these (especially Klein Bottle Crossword, Good LOORD that's hard) BUT I don't like Apples BECAUSE you can't note which apples are worms.

Jacob - Right-click marks apples with an ill smiley face, at least on my Windows PC.

it looks like they may have changed the directories for the downloads. you might want to update the links, zxo. :)