Tiger Eye: The Sacrifice is a new casual adventure game from PassionFruit Games, creator of Tiger Eye: Curse of the Riddle Box. The story is based on the book by Marjorie M. Liu, who also had a hand in writing the games, and picks up right where the first one left off. The gameplay departs from the usual hidden object adventure formula, though it still provides ample challenge and plenty of puzzles to solve as you try to keep Dela and friends out of trouble! 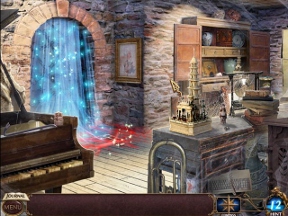 In the first Tiger Eye game, protagonist Dela Reese unleashed the ancient warrior Hari who was trapped in a riddle box. Thousands of years old and bound to serve the owner of the box, she quickly sees the humanity behind his weathered eyes and sets out to free him from the curse. Her actions gained the attention of an evil wizard, though, and as The Sacrifice begins, Dela finds her car enveloped in a strange purple light as it crashes into a tree. Soon, she learns her friend Kit has been kidnapped, and it appears the same shady group could be behind it all: the Magi.

Tiger Eye: The Sacrifice plays out in a series of chapters that are seamlessly woven into a single continuing narrative. The game is strongly centered around puzzle solving, item finding, and clever mini-games, leaving you free from standard hidden object scenes with lists of items to find. Instead, Tiger Eye encourages you to organically explore each area, clicking on items you see and trying to solve whatever puzzles you encounter. The bottom of the screen holds a handy tasks bar that tells you what you should be looking for, whether that be levers to complete a mechanism, statues with wings, or pieces of newspaper.

The mini-games really make The Sacrifice shine. Not only are there dozens of them, but each one makes it a point to be more than just a rehash of a familiar mechanic, incorporating new concepts and creative visual designs into each theme. Best of all, the instructions aren't spoon fed to you, allowing you to figure out what's going on through experimentation. Sure, hints are available at the top of each puzzle, but where's the fun in that? 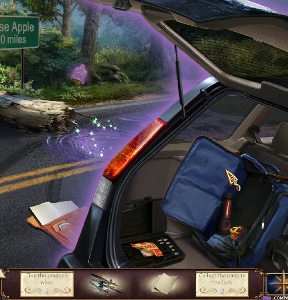 Analysis: Tiger Eye: The Sacrifice will surprise you with its high quality visuals, attention to design, and refusal to fall victim to most pitfalls casual adventure games succumb to. There are no text lists of items to find in crowded scenes, just exploratory-based object finding, which feels so much more natural than staring at a single screen for ten minutes trying to find a hot dog in ancient Egypt. And the puzzles play directly into the plot, all of which is wrapped in gorgeous hand-drawn artwork.

The story, while perfectly entertaining and even a bit intriguing, does fall on the side of the paranormal romance genre, so you can expect a fair number of cheesy moments, hunky protagonists, B-movie villains, and last minute saves from Dela's psychic powers. Not quite the epic tale some players might be hoping for, but then again, have you seen what most of these other casual adventure games pass off as plot?

Tiger Eye: The Sacrifice is an extremely well-made game, a fact that shows in the gameplay, the visuals, the writing, and the puzzle design. It provides a sturdy three hours of play time, more if you choose the higher difficulty level or decide to save up to unlock expert mode.

Curse in the Road Puzzle

Chapter 2: Where is Kit

Town Square and Outside Gallery

Chapter 11: Return to the Morgue

Screenshot
Congratulations, you have completed Tiger Eye: The Sacrifice, so Hari and Dela can have their happily ever after.

Curse in the Road Puzzle

Chapter 2: Where is Kit

Town Square and Outside Gallery

Chapter 11: Return to the Morgue

Screenshot
Congratulations, you have completed Tiger Eye: The Sacrifice, so Hari and Dela can have their happily ever after.