Orthogonal Games' unique indie stealth adventure The Novelist is initially sort of weird to describe. The Kaplans, Dan and his wife and their young son, have just moved to their new summer home. But you're not playing as them. You're playing as the ghost in the house that's trying to avoid detection, while at the same time attempting to manipulate their lives by reading their minds and subtly intervening in events around them. But what do you decide to do with this ability? None of the choices are as simple as they seem on the surface, and none of them are easy. You might be able to reach a compromise, but keeping everyone happy when everyone wants something for themselves is far, far harder than you'd think 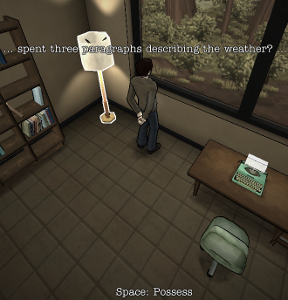 If you just want to enjoy the story, you can choose to play the game in story mode and wander about freely without fear of being spotted. If you're playing in stealth mode, however, you'll have to sneak and Ghost Trick your way around the Kaplans, hopping from light fixture to light fixture to stay out of sight. The game doesn't restrict you by distance, just line of sight, so you can zip up to a lamp on the other side of the house as long as your view isn't blocked. The game is divided up into twelve chapters over the course of the family's vacation, and each chapter deals with a specific problem the family is facing, and everyone wants something different. In addition to reading their thoughts, if you sneak up behind someone you can actually enter their memories, hunting down snippets and scenes to give you insight. Once you've figured out who you want to side with and what they want, choosing the appropriate item will make night fall, which allows you to explore the house (and potentially uncover certain other secrets) and either whisper your choice to Dan, or choose one of the other family members' wants to make a compromise... provided you haven't spooked them, of course. 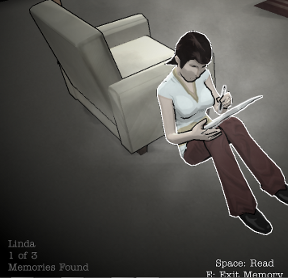 Analysis: Largely, the stealthy aspect of the game doesn't really add much to it because it's never a challenge even later in the game when some lights are disabled. Characters are slow enough that you can zip or even just run all around and possess them without ever needing a distraction, so it winds up just feeling sort of tacked on rather than integral or interesting. I felt the sting of being unable to replay specific chapters when a bug locked me out of being able to make either compromise even though both were available to me as well. Finding a compromise that works well is the most challenging part of the game, and one I struggled with since at times I felt like fate did not want these people to be happy together. The difficulties with trying to make sure everyone got what they needed, both as individuals and a family, did feel realistic, though at the same time it all seemed to come down to a lack of communication. Some instances felt like manufactured drama as a result, a "my way or the highway" scenario where someone is going to lose versus, you know, forcing everyone to sit down and talk about it instead of letting everything fester.

The Novelist paints its cast with broad strokes and limited interactions in a way that might both make it easier for some players to project while making it harder for others to connect. It's a unique game, and not a particularly long one at around two hours to make it through once without taking replayability into account, and best suited for players who prefer quiet introspection and subtle character drama. It's a dreamy, thoughtful game filled with moments of sweetness and joy alongside the bitterness and hurt, and "winning" is less about finding some magic combination for all the characters as it is simply doing your best to understand and accommodate them even knowing that in some cases, it might not be enough. At times it feels more like an interactive art piece than anything else, and if you can disengage the "High Score/Achievement Get" part of your brain long enough to see yourself in each of the characters, it can be an engrossing and moving experience. Though I had difficulty making a bridge at times between my own feelings and those of Dan and his family, The Novelist is still without a doubt a heartfelt and very personal sort of game that has the potential to move people who have the patience and experience for it.