The Missing:
A Search and Rescue Mystery

The life of a search and rescue pilot is an exciting one, isn't it? At any given moment you might be hauling crab fishermen from the Bering Sea, making a daring rescue three quarters of the way up Mount Everest, heck, you might even be the second in line to the throne of England! Although, come to think of it, only one particular search and rescue pilot would be able to fulfill that last one. Nevertheless, it's an exciting and extremely dangerous job, and it just happens to be the occupation of the hero of The Mission: A Search and Rescue Mystery, the newest adventure/hidden object hybrid from Sulus Games. I'm thinking, though, that in this game this particular pilot is not exactly the Duke of Cambridge. 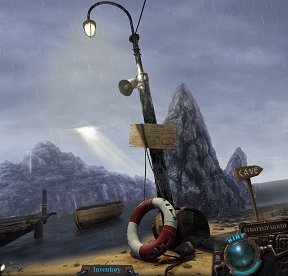 A professor and his four students have gone missing on a tiny, almost invisible island (actually two islands) in the middle of the ocean, the only clue to their fate is a mysterious rescue call from said island. Our intrepid pilot friend rushes to the scene only to be trapped by the strange and unseasonable weather that is swirling about the place. Pretty soon it becomes apparent that something pretty bad has gone down and that there is more to the disappearances than just bad luck and chancy weather. The professor's research, you see, has awakened something, and that something is stalking every living thing on the island. Can the plucky pilot fix whatever has gone wrong and find all of the missing folks before time runs out? That, dear gamer, is entirely in your hands.

After the harrowing opening animation the game begins on Toto island, home of Professor Kelvin and his research team. The player must navigate their way around the island and interact with the scenery with a simple point and click of the mouse. The Mission: A Search and Rescue Mystery features that staple of the adventure hybrid, a changing cursor, which indicates things that can be picked up, things that can be examined, and areas to which you can travel. Sparkles of various colors indicate either places of interest, mini-games and puzzles, and of course the obligatory hidden object scenes where you collect a lot of stuff to find one useful item. Found items will then be used to solve other games and puzzles and eventually the central mystery of the island itself and the fate of its inhabitants will be revealed. 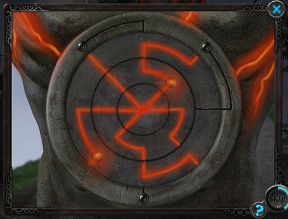 The mini-games and puzzles are the best part of The Mission: A Search and Rescue Mystery. Although there will be some familiar tropes along the way (it's just not an adventure hybrid without a pipe puzzle, is it?) many are either new and original or ones that are not used all that often in the adventure/hidden object field. Better yet is the difficulty of the puzzles which increases the further into the island you go, involving a lot of spatial reasoning, logic, and observational skills. Good thing there's your trusty notebook keeping track of various clues you find along the way, otherwise you'd be in for a lot of backtracking. Eventually you will reason your way to the dramatic ending and learn the secrets of the mysterious islands.

Analysis: The MIssion: A Search and Rescue Mystery is not your average adventure hybrid, which is a good thing. The emphasis here is on the mini-games and puzzles with the hidden objects scenes seeming to be almost an afterthought, not that that's a bad thing. Oh contraire! With less emphasis on picking up tons of items and more emphasis on pure logic The Mission plays almost like a pure adventure game, or even their modern flash descendants, room escape games. 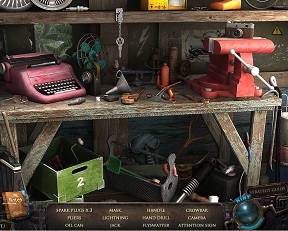 A lot of work and effort has gone into the look and feel of The Mission: A Search and Rescue Mystery. The backgrounds are pretty stunning, even in the gloomy light of the storm (and the later conjured darkness), and the moody music and incidental sounds only add to the increasing tension as you rush to rescue the professor and his students from...whatever fate awaits them. Sorry, you'll have to enjoy the ratcheting tension spoiler free.

If there is a downside to this atmospheric and challenging game it is that those beautiful backgrounds are a bit underutilized. They're pretty to look at, but there's not much to do in any of the scenes that you wander through during your adventure. More hidden object scenes are not necessarily needed, which would simply feel like padding, but when you've created such exciting and elaborate places to visit it would be nice if you could interact with them more. Because you can't, and due to the fact that each hidden object scene is only accessed once, that means that The Mission: A Search and Rescue Mystery is shorter than it could have been. Of course, most of the adventure hybrids on the market today suffer from the same problem: shrinking gameplay. The story itself, although interesting, is also pretty predictable and the storyline, characters, and settings seem a bit ripped off from Lost.

Despite the shortcomings The Mission: A Search and Rescue Mystery is still a blast to play if only for those puzzles. For those who miss the days of classic point-and-click adventuring this is a game that, while not completely resurrecting the old days, certainly comes closer than most on the market. Moody, atmospheric, and challenging, this game is one that will grip the player from the first crack of thunder to the dramatic denouement. Give The Mission: A Search and Rescue Mystery a whirl and become the heroic pilot you've always wanted to be without the accompanying danger (or Discovery Channel camera crews).

A Collector's Edition is also available. It includes concept art, wallpapers, a well-written built-in game guide, and a hefty side adventure that covers the professor's early days on the island, long before he was a professor. Remember that Big Fish Game Club Members pay only $13.99 for Collector's Editions (or 2 club credits), and collector's editions count 3 card punches of 6 total needed for a free game.

Nice game. I liked how standard inventory items didn't vanish after one use but stayed around for multiple uses. All in all, I'd recommend it.

Thought the game was good until I had to get to the lighthouse. Door is open but I couldn't go through it. Each time I clicked on it, I was kicked back out of the room. So close, but no finish. Disappointed.

Joyce -
Check the walkthrough just above your comment. Maybe you missed a task and can still finish the game.

lightning battery puzzle-after solving the puzzle, the nitro won't work to cool the battey. have tried every thing I can think of.any suggestions?

Ron -
You might want to check the walkthrough above the comments to see if you've missed something.