The Man with the Invisible Trousers 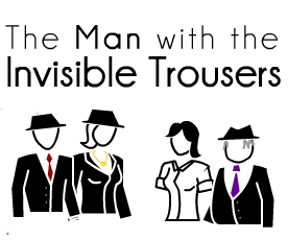 It was a dark and stormy night. James was waiting. Waiting for someone to need his skills as a private eye. Or rather, he would have been if someone hadn't murdered the head of his five-person detective team. Now James is on the case in The Man with the Invisible Trousers, a new puzzle platformer created by Radical Dog with a kooky noir theme.

There's two quirks about this case, though. First off, James' boss spent his entire life in one room. Realism aside, this means that it had to be an inside job... one of the members of the detective team had to have been the murderer. To solve the case, James has to make it through a gauntlet of spike-filled levels. Move with the [arrow] keys and jump with the [spacebar]. Your progress is saved automatically, so you can continue from the last level you finished. Every few levels, James talks to the other detectives and learns a little more about who might have done the despicable deed. This, however, is complicated by the second quirk. James is either wearing the titular invisible trousers or simply has no legs, so he reacts to gravity and curved surfaces in a very unusual way. Walking on a curve tilts James to match the curve, while walking off a corner causes gravity to act on James as if he was being pulled "down" relative to himself. 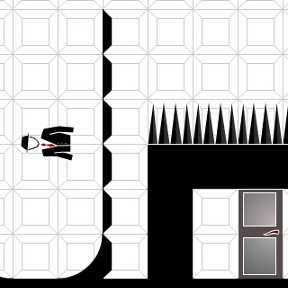 You can only finish a level by leaving through a door, but to open the door James has to be standing upright. This means that most levels consist of trying to manipulate James so you can both end up at the door and be standing the right way to open it. Be prepared to swear just like a film noir detective as you try make this happen, though typically the levels are short enough that having to restart isn't a big problem.

The Man in the Invisible Trousers features a classy, minimalist graphical style and some of the best jazz music in Flash gaming. It's also got a randomized ending; each time you play the killer will vary, though that might not be enough to get most players to go through the whole game multiple times. There's not much to say beyond that; there's one core gameplay concept here and it's done effectively and stylishly. It's worth a look for puzzle fans with a love of jazz and twenty minutes to spare.

Play The Man with the Invisible Trousers

...aaaaaand that's what walkthroughs are for. I guess the power of posting allowed me to figure out there's a video walkthrough attached to the game.

I think this game should pay tribute to "Sarah's Run". I just can't stop thinking of that game while I'm playing this one.. yes, i'm Sarah's Run addict too..

You know, invisible trousers actually would be kinda 'revealing'. ;P

Oh, sure. He gets his own game, but when I wear my invisible trousers, it's a misdemeanor.

Well, the controls aren't quite as responsive as I'd like them to be, and some of the later rooms are really confusing (no wonder Johnny never left his office!), but the jazzy music tottaly makes up for it.

Despite the poor controls, I liked this game. It didn't go on too long. I think I solved a couple of levels by accident due to poor collision detection.

Now this is a 5 stars game! Well done in every aspect. Maybe a little too short ;)

I liked it but have to question the decision where you need to be precise with the edges of platforms yet you can't see your legs/feet.

I played this game through three times. Once on Newgrounds, twice here. Every single time Lily was the culprit. Odd.

If you don't want to replay the game every time to find the culprit,

You can continue from the last level, and it will usually give you a different culprit. So far I've managed to get each of the three others - anyone know if there's an ending where you did it?

I don't think the controls are bad. Mostly because I don't think this is a platformer, it's more of a puzzle game.. I didn't find a single moment like "I need to run to the edge and then try to land in that tiny platform there" or else the controls might have had a negative effect.

It's not much of a puzzle game either; it's very very easy. Some of the levels can look a little daunting at first, but there's usually only one way you can really go, so that's just superficial. Which is a shame, because I really liked it otherwise! It'd been great with better level design.

When you've played through the game, you should watch the Making of videos, under the Don't play menu. They're great.

Interestingly, the walkthrough didn't correspond to the levels that were on my screen...weird.

Haha, that was nice. Not too easy, not too hard, great atmosphere. Only problem was it felt a little too familiar... I kept pressing "Shift" and wondering why it didn't do anything...

Hey, this one was weird... with reallly good music.

Some dialogue from the closing screen:

"Why is our skyscraper full of puzzles?"

"I just used the elevator to get here."

About the levels -- I think that if you do some levels fast, you get bonus levels, and that can throw you out of sync with the walkthrough. I'm not sure how it works, though.

Please! Somebody give me a written walkthrough. Videos don't work on this computer.

hey how do you get past level 10? I cant watch the video.