Though it's a scary (if distant) thought in real life, being stranded on an island where you have to fight for survival isn't high on anyone's to-do list. Place it in a casual game, though, and we're tripping over ourselves to start the download. Sahmon Games' simulation series The Island: Castaway has been perplexing players for a few years now with its superb blend of quest-based item hunting and character managing, spawning The Island: Castaway 2 not long after the original was released. Now there's the mobile version of The Island: Castaway, and it manages to bring every pixel of entertainment from its PC cousins to the portable touch screen. Be prepared for the addiction to begin all over again! 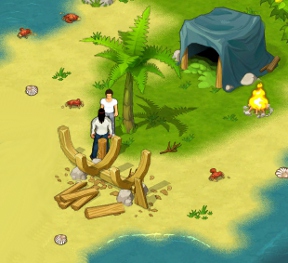 The Island: Castaway is sort of a mix between Virtual Villagers, Wandering Willows, and an RPG. You play the role of Tom who finds himself trapped on a tropical island. Other people are there, too, and the mystery of how everyone got there and how they're going to get home is a big one. By speaking to other characters, you'll embark upon missions that range from the small to the large, running around to find food, gather supplies, or help solve some of the many mysteries in the vicinity. There are tons of things to do apart from completing story missions, too, like working with recipes to build your own meals, hunting, fishing, planting things, finding new tools and much more. It seems like the discoveries never end!

The mobile version of The Island: Castaway is essentially the same as the PC/Mac version released in 2010. The biggest difference are the controls, as on portable devices everything must be handled with a touch screen. It's an absolutely flawless transition, though, and after a few minutes of running around you'll likely prefer touch controls over a mouse and keyboard set-up. It's more personal, and arguably more convenient. Also, a game as intricate as this plays better on a tablet device. The screen real estate makes for a much richer experience.

Whether you're curious about the series or you just want a portable addiction to carry with you on the bus, The Island: Castaway is a phenomenal release that will keep you busily scurrying around the island for hours on end. Seriously, it's dangerously captivating!

NOTE: This game was played and reviewed on a NOOK Tablet. Game was available in the North American market at the time of publication, but may not be available in other territories. Please see individual app market pages for purchasing info.

Screenshot
Jack of all trades

Part 2: We are not alone

Part 4: Enemy in the mirror

This walkthrough was originally posted here. Thanks to Jazz for the walkthrough!

Screenshot
Jack of all trades

Part 2: We are not alone

Part 4: Enemy in the mirror

This walkthrough was originally posted here. Thanks to Jazz for the walkthrough!

When is the sequel. Going to be avalible on the kindle fire?

I'm playing on iPhone. I've gotten the ingredients for the fish stew for Nick and Nick has disappeared. According to the walkthroughs, John should have approached me to go to the swamp with him. This hasn't happened and I can't find John anywhere. John, Nick, and Mike are not on the map, no one is talking and I'm just wandering around. I've searched all of the caves (except for heart of the island - it's still covered in clouds) and I have 8 of the sacred statues. Is this a glitch, or have I missed something critical?

I've played some of the game on my iPad and it seems to follow the download version, so you might want to go back through the walkthrough.

Mike won't show up on the map while he is sick.

If you have 8 statues, you must already have been to the swamp because that is where you find Oke.

Is Amy on the Map? If not, she may be in the cave with Nick.

I'm stuck with gathering the red flowers for John in the mountains. Phato said, that there are flowers growing there, but I couldn't find one. I'm playing on my iPhone 5, version 1.1
Please help.
Thank you