The Chronicles of Emerland Solitaire

No big deal, but you know those magic amulets that help keep balance in the kingdom? Well Seth the evil wizard is out to destroy those. So I know you're just an apprentice wizard and all, but it's up to you to stop him in The Chronicles of Emerland Solitaire, a card game hidden object hybrid by Rainbow Games. 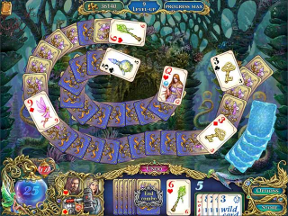 As you might guess from the title, The Chronicles of Emerland is a solitaire card game. You have a deck of cards at the bottom of the screen with the top card turned over. The object is to remove as many card piles as possible The piles are arranged in different formations across the screen also with the top of each pile turned over. Using the top card of your deck as a starter, you need to make numerical runs with the cards, one number up or down in value with kings and aces rolling over to each other. You can only play cards that have no other cards on top of them, even if cards behind them are face up. Try to clear as many cards as you can before your deck runs out. If you run out of cards and have more than four cards left in your piles, Seth rejoices with an evil cackle, and you do not pass the round.

You gain gold and XP depending on how well you do. Match at least five cards in a row for a combo to raise your score multiplier. The longer your run and the higher the combo, the more points you earn and the faster you can level up. Yes, though you do start as an apprentice, you are able to raise through the ranks as you play along. Besides stardom and glory, earning levels gets you card bonuses. These appear from time to time on your piles. If you can match the card with the bonus icon before it disappears, you get the bonus which can be anything from extra gold to adding cards to your deck. The bonuses are tempting, but don't let them distract you if there is an obviously better move to be had. 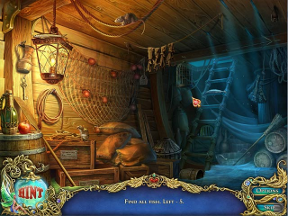 As the story progresses, you travel to four kingdoms--human, elf, dwarf, and mermaid. Seth leaves obstacles in your way, which sometimes result in a hidden object scene or two between card games. Warriors from each kingdom join you in your journey, each bringing a special ability into the card game, such as removing or changing certain cards. The special abilities charge as you match the corresponding suite.

Gold is used in the shop to purchase amulets. Clear piles to earn more coins. The amulets give you permanent bonuses and abilities that come in extremely helpful for passing levels. There are amulets to boost your gold and XP earnings, among other things, and each companion has a corresponding amulet to make their special abilities even more potent.

Analysis: Solitaire can be a great way to unwind, and The Chronicles of Emerland makes that all the easier with beautiful artwork and a relaxing soundtrack. The hidden object scenes are a great way to break up the game and add variety as well. Each level is made up of ten rounds, and you need to pass a certain number in order to progress to the next level. This is well and good except that if you want to go back to replay a round you had a hard time with, you have to replay the entire level. Along with that, sometimes you can tell your game is not going to turn out well. It would be nice to have restart game option for these cases.

With hours of gameplay and a fun story line, be warned that you could get sucked into playing longer than you intended. Rainbow Games has created a wonderful solitaire game anyone can enjoy. So come help save the world, one card at a time.