If you're dead and you have a problem (aside from the whole "dead" thing, that is), you might run into Rosangela Blackwell and her otherworldly partner, Joey, if you're lucky. Not that Rosa's had much luck herself these days; despite being extremely psychic, as well as extremely awkward, she's been struggling to catch a break with her writing. A phone call from an old friend might help get her foot in the door at a respected local paper, but it turns out that where Rosa goes, the dead never lie quietly... and in The Blackwell Deception, a point-and-click adventure from Wadjet Eye Games, quite a few people are turning up dead these days. Coincidence? Not when Rosangela's around. Poor kid. She really needs a better hobby, something less stressful. Bomb squad, maybe? 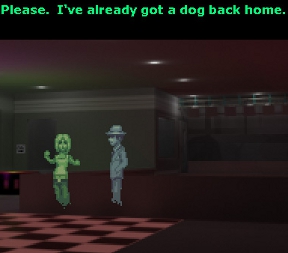 To play, just click around. If an object can be used, its name will pop up when you mouse over it; right click to look at something or someone, and left click to interact. Moving the mouse to the top of the screen will cause your inventory to drop down, as well as let you access the options menu to save your game and such. Both Rosa and Joey are playable characters, and you'll want to swap between them often by hitting [tab] since there are things one can do that the other can't. Joey, for instance, in addition to messing with electronic frequencies, can pass by obstacles Rosa can't, though the only physical way he can interact with objects is by a puff of cold breath. While Rosa can do all the boring usual flesh-bag stuff like physically touch things and talk to people, she's also got her MyPhone, which lets you check her e-mail, call people, or even search for clues online. Make sure you have Our Heroes talk to everyone (including each other); exhausting every conversation object and consulting your notebook frequently is the key to advancement. (You can click on one topic and then another to combine subjects in your notebook and potentially open up new avenues of discussion.) Well... that and having Joey blow on things. He's such a special guy. 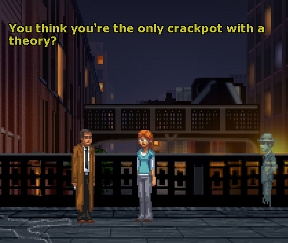 Analysis: Classic point-and-click adventure games are something of a dying breed these days, but the Blackwell series has continued to prove that the genre isn't dead and buried yet, and could very well end up being considered a classic one day. The game looks great in a way we've come to expect from Wadjet Eye titles, full of expressive character art, detailed environments, and wonderfully animated sprites courtesy of Ben Chandler. It should also come as no surprise that the game sounds wonderful too, with all the actors delivering solid performances and a light touch with sound that serves to enhance the atmosphere.

Most of the puzzles in the game typically revolve around figuring out how to use your characters to get past an obstacle, and while occasionally this leads to some really creative moments, it can also be intensely frustrating. When you're stuck, the old adventure game failsafe of "try everything on everything else" is annoying without having to do it again with a different character, and some of the solutions can be more than a little overcomplicated for relatively mundane tasks. Fortunately, the story is more than strong enough to keep you going, and almost from the beginning Deception sets out to make it feel more personal. Moments of genuine tenderness or sadness make the storyline this time feel altogether more mature, with Jamie's arc being perhaps the best in all the games, and you start to get the sense that the story throughout the series as a whole is really shaping up to be something big.

The Blackwell Deception isn't an end to the series; you'll get more hints about Joey's past, and a big, satisfying showdown with a villain, but ultimately the game raises more questions than it answers. It lays the groundwork for a very big confrontation in the next installment, and if you've followed the series this far, you'll be eagerly awaiting it when it arrives with the rest of us. Packed full of mystery, character, charm and suspense, it's a delight from start to finish. The Blackwell Deception is around four hours for your average player, and fans of the series will love every minute of it.

It's "Epileptic Fish," the band on the poster in her dorm.

Search for Rachel Abu. Note the Cup of Clay cafe.

Wow, the demo is incredible! Excellent writing, graphics and gameplay. Hopefully I can swing the moolahs to buy it sometime soon!

It's "Epileptic Fish," the band on the poster in her dorm.

Search for Rachel Abu. Note the Cup of Clay cafe.

Played it and loved it. Again!
I love how Dave Gilbert from installment to installment succeeds in categorically refusing to explain any major in-universe question. I heard the answer "I don't know, kid!" probably more here in this series, than anywhere else, but that leaves incredible freedom to make my own connections and theories!
First class writing and voice-over. When comparing voices to e.g. Oblivion, which I'm trying to go through at the moment, it's obvious all those AAA production funds couldn't mean a thing if you don't have talented actors and/or they don't care about the game at all..