Indiana Jones had it easy, if you think about it. I mean, sure, he had to run from a boulder that was chasing him down a narrow hallway, but once he got away from the boulder their relationship was over. What if that's not how things ended, though? What if Indy and the boulder hit it off and decided to become partners? Well, that's the premise of The Ball, a new physics puzzler from Teotl Studios. 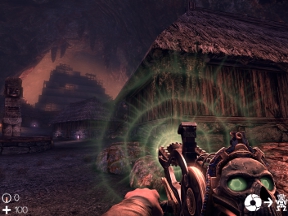 In The Ball, you play an unnamed archaeologist who accidentally falls into an ancient system of ruins during a dig. There, he discovers a bizarre ancient weapon which can control the titular ball. Move with the [WASD] keys, crouch with [C] and jump with the [spacebar]. To manipulate the ball, use the [left] mouse button to fire your hammer-gun to shove it away, or hold the [right] mouse button to pull it towards you. While rolling the ball in front of you, it becomes transparent, making it easy to push it along while keeping it close by.

Simply rolling the ball around isn't enough, though. There are puzzles to solve, and to do that you'll need help from the ball. The most basic kind of puzzle involves standing on a blue switch and using the ball to hit an orange switch at the same time. You'll also use the ball as a platform to protect you against dangerous terrain as well as work with levers and doors to move the ball through places it normally wouldn't fit. Your globular companion is quite large, you see, and it doesn't exactly fit in your pocket.

Then there's combat. Glorious, squish-filled combat. When the various evil denizens of the ruins come calling, the best way to handle them is obvious: hit them with the ball. They won't just stand there and allow themselves to be smashed, but you're clever enough and fast enough to get the job done without much trouble. Enemies larger than the ball, however, must be dealt with using parts of the level to deal damage. Which translates as more puzzle solving! 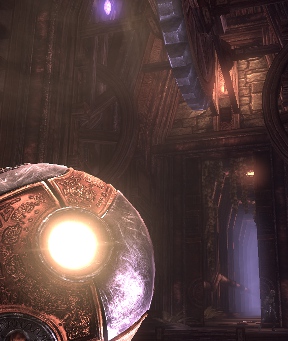 Analysis: Physics puzzle games have become more and more popular since the release of Portal, a game that shares a number of thematic similarities with The Ball. Unlike a lot of physics games, though, this game does full justice to its concept and builds an entire experience around one simple but versatile mechanic. And it does it in an entertaining, engaging way without sacrificing gameplay or overall quality.

The Ball is almost a character in itself, since it serves as your companion throughout the game. You'll learn the best ways to wield it to accomplish your goals as you play, which is important because the game consistently ramps up the difficulty. Early on the puzzles aren't too tough, but later levels are real stumpers, to say nothing of the huge and impressive bosses. One highlight of the game is the variety of levels available. While the basic mechanics of The Ball remain the same throughout, the way that they're used is constantly changed up and toyed with. The first time you'll see this will be the oil and rope puzzle, and you'll grin when you figure out how to solve that one!

The Ball runs on Unreal Engine 3, an advanced engine for games with intense graphics and physics, so you'll need a relatively powerful computer to run the game at a decent speed. On a computer that can handle it, though, the game is gorgeous. Screenshots hardly do it justice.

The Ball is a great example of a physics game done right. The puzzles make sense, the combat doesn't feel tacked, on and the presentation is amazing. On top of that, the game's plot is interesting; the mystery of the ruins and the ball's origin will keep players delving further. Just keep in mind not to touch the Ark of the Covenant if you come across it during your explorations. That thing's dangerous.

I found the ball really distracting even when transparent - mostly because the non-transparent bits kept spinning as I was rolling the ball.
Is it just me?

I would just like to note that the Twitter icon next to the game title is overlapping the [xP] rating icon.

[Thanks. The entry was missing the download tag, but that's fixed now. -Jay]

"Is it just me?" Good question since I can't even begin to coordinate this game's arrow buttons with the mouse to hammer and aim at the same time. I would say the controls are out of date and inappropriate for this kind of game. But, nice graphics and kind of interesting until the control buttons got in the way.

Not bad, they're being very inventive with their mechanic, with plenty of cool puzzles even in the demo. I really liked the bit where you have to make a trail of oil with the ball, then light it on fire.