The Agency of Anomalies: The Last Performance

Note to self: don't become a detective for abnormal goings on. Instead, anytime that desire for something paranormal rears its deceptively alluring head, watch an episode of X-Files to get the same thrill, but a safer one. Or take a crack at the new hidden object puzzle adventure game The Agency of Anomalies: The Last Performance, the third in the series by Orneon. And maybe for a brief trip to Nostalgia Lane put on the Great Mouse Detective in the background. Seriously, the peg legged bat always freaks me out. 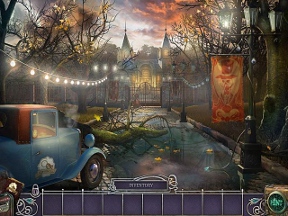 After a long day of ridding the world of anomalies, you finally get to clock out, go home, and maybe finish reading that book you've been working on. As you walk by a poster on your wall depicting a famous group of performers, an eerie message suddenly appears: "help us". You drive to the theater to figure out what exactly is going on, then you nearly crash into someone. As it turns out, those poster people are in trouble. They've all got super powers, you see, but those powers are destroying their bodies. With the help of your sarcastic comments, some deductive reasoning, and a creepy guy in a monocle, you'll traverse the area and attempt to out-think a brotherhood of evil dudes known as the Seekers. See why X-Files may have been a bit safer?

After arriving at the gates, you'll pick your way across the landscape, using just the mouse to grab items and solve puzzles using your handy inventory. If you get lost, a help button and a journal at the bottom of the screen can give you a nudge or two. Between your adventuring streaks you'll encounter three different types of hidden object scenes: the normal scenes where you follow a list, a reverse scene where you must put the objects in the inventory bar back into the scene where they belong, and a shadowed scene where you're given the shape of the object you must find instead of the name. 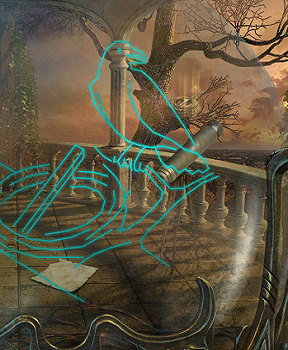 The best carry over from the previous game in the series is the addition of powers that you will acquire as you help out each individual performer. Astral projection, the ability to extend your limbs, underwater breathing, electricity, and biochemical creations are at your disposal for the more complicated of tasks. When you can use a power the properly, a colored orb will appear as you hover over the target. Click it and you'll play a mini-game, the successful completion of which makes the magic happen!

Analysis: Paranormal detective adventures are always a thrill. There also seems to be far less violence in a paranormal crime scene, which helps out those too squeamish to play something like a CSI game. In Last Performance, Orneon takes what they've done right in the previous games and keeps the ball rolling. The addition of powers is a nice bonus to keep the game interesting and allows for some pretty nifty mini-games. The scenes are visually stunning, though that's not surprising with the standards of greatness Orneon sets itself for the products it puts out. One of the less noticeable but entertaining additions is the sarcastic comments of your detective. "Of course this door is locked. Why wouldn't it be?" It's nice to see that even the detective knows how ridiculous it is for every door you encounter to be sealed shut!

There are, however, a few weak links in the game overall. The absence of a map is surprising because the grounds you'll be uncovering are rather extensive and there's plenty of backtracking. This isn't overly concerning because the game is fairly linear and tries to localize where you need to be once you acquire certain tasks. The other misstep is that once again the powers aren't able to be used on just any object. This one still makes as much sense as the previous game because if you could constantly use the power of electricity or astral projection then there would really be no game, you'd simply grab everything instantly and possibly barbecue the whole place with your powers. If everyone is in the hospital because of appearing to be struck simultaneously by lightning then the case is solved right?

If you're already a fan of the Agency of Anomalies series, you won't be displeased with the latest release. And if you're looking for something new to sink your teeth into, this is definitely a game that is worth your while. Great artwork, logical dialogue, and a nice peppering of hidden object scenes and puzzles alike!