Temple of Life:
The Legend of Four Elements

Temple of Life: The Legend of Four Elements is a casual adventure game dusted with a sprinkling of hidden object scenes. Unlike most hybrids out there, Temple of Life ditches the whole spooky mansion bit in favor of a classic cursed burial chamber, complete with traps and some delightfully complicated puzzles. The plot may not be anything new, but the mini-games are crisp, and the overall sense of mystery and danger are as strong as any movie where the main character runs from giant boulders and wears superb brown fedoras! 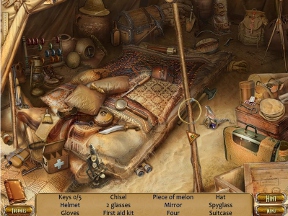 Those trickster ancient Egyptians, always leaving ancient artifacts buried deep within tombs that, as legends are wont to fortell, are cursed from stem to stern! Well, no matter, because you're an adventurous archaeology student whose professor has just uncovered some new evidence about a secret hiding inside of Tutankhamun's tomb. Off you go, Jane, to see what the sands of history have swept beneath themselves!

Temple of Life: The Legend of Four Elements relies on casual adventure-style puzzles and exploration mechanics, giving you freedom to explore, open new areas, pick up items, and manage a small inventory of goodies. Puzzles present themselves in the form of curiosities revealed by a changing cursor. Search around the area for items that may be of use, keeping in mind you may need to trek a few screens over to get what you need. Hidden object scenes provide a few key items

The hidden object scenes are spaced just about right, and because of their variety and high level of interactivity, they're actually interesting to complete. Each scene has only a dozen items or so, but some of them will be listed in blue, informing you that you'll need to do something extra to locate them. Finding a first aid kit, for example, may require hunting down items that would normally go into the kit (pain killers, bandages, etc.) and dropping them into a pouch. Only when the pouch is full can you collect it. You'll also slice open pillows, dust off bits of scenery, move things out of the way, and unlock chests with the keys you find laying around. 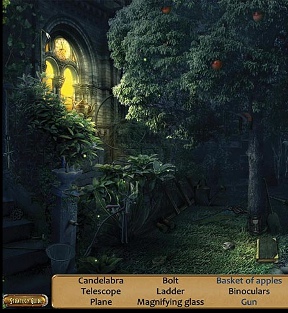 Analysis: Similar to but just a little different from most other casual adventure hybrids out there, Temple of Life: The Legend of Four Elements is one of those games that's just a joy to play. It's kind of like watching an action/adventure movie in that you don't really experience anything new or learn how to be a better person by viewing it, but you have a fantastic time all the same. Temple of Life gives you that same sort of thrill, allowing you to solve puzzles that involve reflecting mirrors and spinning sawblade traps while gathering clues about an ancient mystery. Chilling!

Pointing and clicking is the central focus of Temple of Life, and you'll have to keep your eyes wide to find items in this game. Casual mode (as opposed to expert mode) likes to point out places/items of interest with big sparkling stars, but even then you'll need to be inquisitive with your cursor and click on anything that seems like it might be useful.

The hint system is perhaps one of the most entertaining in the casual adventure game genre. The timer recharges on its own, but on occasion a cursed mummy will pop its head out from behind the corner, looking like he's ready to photobomb your picture. Move the cursor over the mummy and it turns into a pistol, allowing you to shoot the ancient evil and collect an additional hint. Jane's no slouch when it comes to archaeology, and she apparently spends some time at the shooting range to keep her skills sharp! Assuming they have shooting ranges in 1885...

All in all, Temple of Life: The Legend of Four Elements wins its biggest points with its puzzle-heavy design and refusal to buy in to the whole scary ghost haunted castle kind of setting. Egypt has been done time and time again, but the allure of ancient curses and traps that are thousands of years old always keeps the brain intrigued!