Tearstone, the new adventure/hidden object hybrid from newcomer DragonsEye Studio, is a fantastic tale of an epic quest that involves an absent-minded professor, goblins, floating islands, and sheep, amongst other things. Answer the professor's call for help and find yourself embarking on a long and involved journey that will end with you becoming the only one who can save the mythical land of Tearstone, mostly by solving a lot of puzzles. 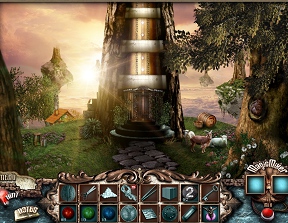 You play a hapless homebody who gets a letter one day from his friend Professor Haise, asking the player to come at once and help with...well, the letter is rather vague on that point, really. So off you run in the Professor's old car (is that a Studebaker?) to help him excavate a ruin that leads to a fortress which leads to an infinite stair (hidden in a tree) which leads to a testy guard goblin which leads to a loooooong elevator ride which leads to a bucolic countryside which leads to...you get the picture. Eventually you'll be traveling to floating islands, talking to ghosts, and attempting to become the "Chosen One", whatever that may end up being.

The first chapter of the story where you get the call from your professor friend plays out as a helpful tutorial, which is good because the gameplay of Tearstone is probably quite different than what you may be used to with the standard hybrids on the market today. To begin with, you will not be facing any classic hidden object scenes (with a list and a bunch of random objects to be found). In Tearstone, every item you find has a use and a purpose, everything you pick up has a function, and there are no random skateboards or gramophones to be found. Instead, the bottom of your screen serves as both your item list (with a picture of what you are looking for as well as a description) that becomes your inventory once you find the item or items. Sometimes you will be looking for a single thing, sometimes you will be looking for multiples of a thing, and sometimes you will need to combine two items together to create a "mix", a third item that is needed to accomplish a task. Fortunately you have a handy mixer machine to the right of your inventory that allows you to combine and create to your heart's content. 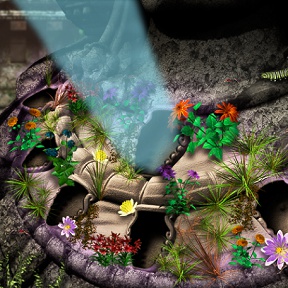 Wandering around the increasingly bizarre world of Tearstone is as simple as the point and click of a mouse. The cursor will become (of all things) a weathervane to indicate areas that you can travel to. Look also for a changing cursor that becomes gears (puzzles and areas that need an object(s) added) and a hand (indicating that you can pick up and use an object but not put it in your inventory). Backtracking along your path is even easier and accomplished with a handy "back" button that is part of the inventory control structure. Also along for the ride is a handy notebook that records vital information and goals and a refilling hint timer that is very useful for both finding objects and figuring out what move to make next.

Analysis: Despite the holes in the storyline Tearstone is quite frankly a breath of fresh air in the crowded field of adventure/hidden object hybrids. Although you will be finding some objects along the way Tearstone has ditched most of the conventions of standard hidden object finding: no lists, no finding random objects, no stumbling into "scenes" of piles of junk, etc. What Tearstone does instead is emphasize the exploration and puzzle solving aspects to the point where you could say that the game has become almost pure point-and-click adventure. 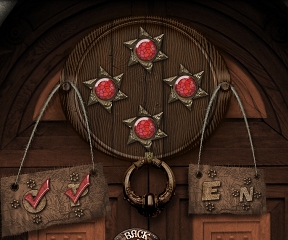 The backgrounds and graphics are beautiful and the deeper you get into the game the more fantastical and stunning they become. Adding depth to your adventures are some fun, interesting, crabby, or just downright creepy characters that you will need to interact with along the way (that fortune-teller is going to give me nightmares for weeks!). Adding to the gameplay is the atmospheric music provided by Xtruist. Best of all are the puzzles, a mix of conventional games (jigsaw and slider puzzles) and more original puzzles. The fact that you must figure out where and when to use your items means that you are looking at a lot of logic and problem solving. Well, mostly logical, although at one point you, as a guest, get to tear apart your hosts' house while they stand there and smile at you. And although you have a pretty satisfying ending, the possibility is there for your adventures to continue (DragonsEye Studio tells us that Tearstone is the first in a planned trilogy).

If there is a downside it is the length of gameplay, which is short, as are most of the adventure hybrids on the market today. The story is also lacking a bit in detail and could stand to be fleshed out a bit more. Folks might be a bit split about the amount of help available in the game: those who are not used to classic point-and-click might be a little lost as to what needs to be done next, while more advanced and adventurous gamers will appreciate the lack of hand-holding and spoon-feeding available. This means that in places Tearstone can be seriously challenging, which only adds to its appeal for those who miss the good old days when adventure games were king.

Tearstone is a fantastic first effort by a new designer on the scene. Despite the flaws in the length of gameplay and the storyline DragonsEye Studio has come up with a fantastic, challenging, fun, and entertaining point and click adventure of the old school, with a few hidden object conventions thrown in. Get excited about adventuring again and help the professor and the land of Tearstone (even if you're not sure exactly why you are doing so) and enjoy a rollicking good time.

I played this for a little bit, and I've got to say that I was disappointed.

Sure, it does away with the usual over-done hand-holding that a lot of games like this use. Problem is, they turned this into a lot of random scavenger-hunting and railroading. They'll happily give you a half-dozen screens you can wander around in, but they'll then make only one object from your list actually present somewhere.

They then give you very few (if any) leads as to what you're supposed to be looking for next -- apparently, they assumed that just having the images at the bottom would be enough of a clue. This falls flat when two thirds of the items shown require a specific sequence of events to be triggered first.

The hint system is next to useless. Often, it will highlight an object that you need to interact with, well before you can actually acquire the item you need to make it work. If you find yourself stuck, you have to gradually puzzle out which areas require you to avoid using the hint button.

Often, you will be required to make item combinations that make no sense, or have to use items in ways that seem illogical or out-of-order. When you finally reach a point where the story progresses, what you get barely seems worth the effort.

Visually, and audibly, this is a top-notch production, and I'm giving it good ratings on that regard. Some of the puzzles I saw are too vague, however, and the item-gathering and use are sorely lacking in direction and meaning. This and the disjointed story drove my rating down tremendously.

A walkthrough is highly recommended. Try to ignore the attempt at a story, and just play it for the eye- and ear-candy and the puzzles.

HAVING A PROBLEM SETTING THE TIME ? 16-45 ?
THE CHEESE IS STUCK ON SCREEN FROM COTTAGE