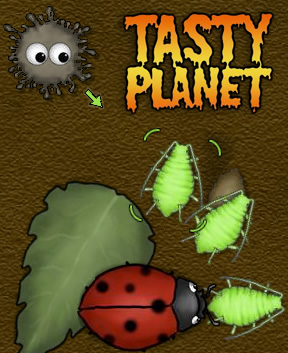 How often do you find yourself playing a game and cackling: "Fools! You've only made me stronger now!"? Not often enough I'd say, but developer Dingo Games has set out to rectify this problem with its game Tasty Planet. You may remember our review of its sequel Tasty Planet: Back for Seconds. In this preview version of Tasty Planet you take control of a microscopic ball of grey goo. Designed by scientists to clean toilets, it soon becomes apparent that this goo can absorb anything and grow without stop.

Using the [arrow] keys for movement, negotiate your goo towards food sources and away from anything bigger than you. Slightly bigger enemies will harass you while much larger enemies will swallow you completely.

With precision avoidance games like this, the devil is in the details. In some places Tasty Planet succeeds brilliantly, and in others it falls short. Funny comics between levels provide humor and exposition, but there's only four comics between the eight levels. The bug, picnic and outer space levels are wonderfully detailed in their objects and general design while other levels are just open spaces on grass. Enemy intelligence is generally good, with the leaf-aphid-ladybug dynamic in one level particularly impressive. Bronze, Silver, and Gold medals can be won by time-trial, but the long level length and low enemy spawn rate makes it difficult for the wrong reasons. Regardless, scooping up objects as your googly-eyed goo zips around is satisfying, especially when you go from microscopic to macrocosmic.

Some of Tasty Planet's shortcomings can be forgiven by its preview game nature. Still, even if you're not interested about buying the 50 level iPhone game it's advertising, there's enough content and quality here for the preview to stand on its own legs. Anyone that likes Katamari Damacy or whom longs to envelop the world in their gooey grasp should definitely give it a play.

This game amuses me considerably. Pity it's so short :(

I loved Fishy! There were dozends of Fishy! clones. This one is the first game of the genre it spawned that can match itself with it.

I prefered instead of levels if there would be a slow zooming out while you grow. Ok when you die, dont become a particle again, but restart at the last big step.

Second improvement, okay this is a eat-or-be-eaten-world. But dogs eating cats, or cars and mounties trying to crush police officers just isnt right.

Yeah, I already have Tasty Planet 2, and I think I'm sticking with that game. :P

The time limits are awfully restrictive, especially given that most of the levels come down to waiting for more ladybugs/mice/dogs to spawn so you can eat them. Much longer time limits, or even no time limits at all, would be nice. There's enough of a challenge to avoiding being eaten without adding a time challenge.

It's online now?
Good thing I downloaded TP2 instead of TP1.

To be fair, they're clones of the awesome Intellivision title Shark! Shark! - Fishy! included - right down to the exclamation point. :) 1982, I believe.

This was a lot of fun, but didn't have much in the way of challenge. The last level bugged me a bit because I kept falling into the sun.

It makes sense that cats eat rats, but why do the police cars and mounties eat the police men? This strikes me as lazy programming.

Two Possibilities:
1: They aren't eating them. Notice that they don't actively chase them. They're actually just hitting and killing them accidentally...while chasing you!

2: After the great mime blight, and thus with their main food source gone, police cars have had no choice but to devour their owners for basic sustenance. And the mounties are just cannibals... cause they're Canadian, and that starts with "can" also.

You are mean, Fhyre. Canadians are awesome!

For being a flash clone of Katamari, this isn't too bad.

The demo of TP2 is much better--the arrow key controls are really awkward compared to the more fluid mouse movement of the demo.

Did anyone else find themselves repeatedly saying "OMNOMNOM" as the blob devoured stuff? :)

How do you finish level 3? I always run out of time well before I can grow enough...

Tried leaving the aphids alone to attract lady bugs but they appear too slowly and I still run out of time.

once you get big enough, you can eat the leaves yourself....

You are having trouble with the time challenge?
I didn't at all, but then I've been playing TP2 in Challenge Mode for awhile...

Many thanks for blogging. That's the most great entry I have found about this.

Really stuck on the level with all the cats and dogs!!! level 5 i think i can't even get onto eating the cats!!! please help!