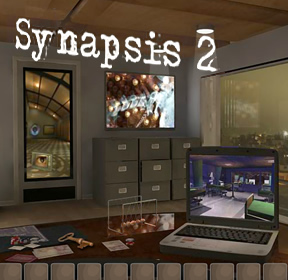 Something has happened. You don't know exactly what, but you know that this place doesn't seem right. This place where the doors don't have hinges or knobs and passing through one feels like you're passing through space and time. No, it doesn't seem quite right, but some things seem...familiar. Such is the strange and wonderful world served up to you by RobotJAM and Rob Donkin in Synapsis 2.

Synapsis 2 is the equally mindbending point-and-click adventure game sequel to the original, Synapsis. You are David Carter, a man who is trapped, maybe inside of his own head, maybe he's between places or maybe he just took a wrong turn somewhere. Either way, he's looking for a way out and to do that you'll have to guide him through a variety of puzzles. The mouse is all you will need to move from place to place, manipulate the environment, pick up and use items.

For a game that's so deliciously weird, the puzzles make sense. There will be times when you scratch your head and a few might cause a little frustration, but for the most part you won't be wondering why you're doing something. The relatively low difficulty of the game means that some players will be able to breeze through Synapsis 2. This is a little disappointing as you'll just want to luxuriate in the unique world and explore more of it, however it also means the game doesn't give itself a chance to get old.

Synapsis 2 is a beautiful looking game. The rooms are varied in appearance and atmosphere and each has their own sounds and music. The whole feel of the game is like a mixture between Twin Peaks' Black Lodge and the introduction to The Twilight Zone ("a place of sight and sound...a wondrous land whose boundaries are that of imagination"). There are plenty of games that are weird, this is one of the few games that I would label as surreal. it's an artfully constructed mixture of the mundane and the bizarre with a story where the confusion is part of the fun and what you see is more important than anything that could be said.

If you're looking for an adventure game that truly takes you to a unique world or you're a fan of film makers like David Lynch of Alejandro Jodorowsky, then you should definitely check out the Synapsis games. It might not take you long to get through Synapsis 2, but the sights and sounds will leave you begging for more.

Synapsis 2 Walkthrough: A Guide to Escaping Oneself

Well, this was... quite a trip. Gimme a sec, I'll walkthrough it.

I can't believe they made a sequel... I guess I'd better set aside five hours for this one...

Synapsis 2 Walkthrough: A Guide to Escaping Oneself

Holy cow, I was just looking for the first game earlier today, and now I find a sequel?

Glad to see this one was just as trippy as the last, and still not quite difficult enough to need SonicLover's walkthrough (sorry man!)

Good heavens... I, just, what? Okay... I played the original Synapsis and was happy to see a sequel. Until I played it. Fun game, nice touch of difficulty, but WAY WAY WAY weirder. But, whats with the end? Very weird/confusing.

Every bit as weird as the first one, and I mean that as a compliment. I was happy to find that the annoying pixel-hunting from the first one has been taken care of, and the only puzzle that really stumped me is that of the story itself... Hopefully there'll be another sequel to make things clearer, or in the very least to confuse us a tad more!

The ending made me think "Are you my mummy?"

It was good to see a continuation to the weird ending of the first, but it seems there is no end to your madness.

The developer/s say there will be a third and final game sometime.

Slight discrepancy on the last segment of the walkthrough about the final puzzle:

the part about the final puzzle, where you have to line up the 1's and 0's-

"You want to connect each 1 to the central clock, and each 0 to a dark circle endpoint."

the manual book isn't all gibberish, I took about an hour and a half to decode the binary numbers, it says :
"this is the void it is a virtual reality simulation, I am your helper David type in your commands and I will do your bidding."
Seriously, I think the one and half hour I put in might actually be worth it.

I can't seem to

Do the clock puzzle in the Time room. I lined up the 1's to the center, and nothing happened. I also can't find how to move all the rings together.

I actually hope that they make a third one!

I love these games! :D

that last puzzle is difficult.

I tried for over 10 minutes, and i can't understand what to do. oh well

For the time puzzle,

see an image of a solution:

I needed a walkthrough on the first one if I recall correctly. This one seemed fairly straightforward. Maybe it was the lack of pixel hunting. Or maybe my head is just in a weirder place these days.

There is actually a much easier way to solve the last puzzle:

Just look at the position of the circles from outside the door, before entering the room itself; that actually shows how the 2 external circles should be placed. It's then easy to brute force the solution for the last one in the middle.

great game, not terribly challenging though. spent most of my time copying the binary by hand to translate it (waste of time). Otherwise really fun. took maybe 45 mins or around there. very cool. though a longer game wouldve been nice. Thanks!

I'd love to play this game when I'm stoned (the first one, too.). I bet it's even trippier.

SO stuck on Time puzzle. Can ONLY move the middle circle (after place square clock which moves) and nothing else. not sure what to do w/ grandfather clock either. :(

i couldn't find the last quarter piece either. very frustrating. i did everything it said, and i rechecked every room, it's not anywhere. i still have the mirror even though i tried to place it in the past (or present, i can't remember)
i'm stuck and annoyed with this one
the first one was so much harder, but easier at the same time

We're going on a trip in our favorite rocketship.