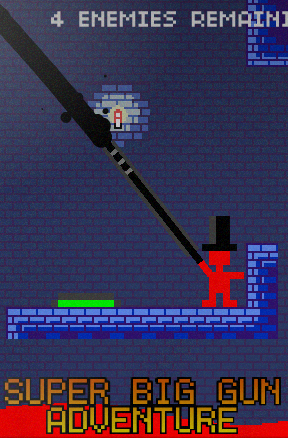 Hello Sir. That's a super big gun you're carrying. And right over there are some super Big Bad Guys. Why not do me a favor and take them out... oh, look at the recoil on that thing! You've fallen right into the lava. Well, who hasn't that ever happened to? Dry yourself off and try again.

In nfyre's physics-based platform shooter Super Big Gun Adventure, you are a pariah of the Gentlemen's Council, who became jealous of the length of your gun immediately after giving you said weapon. It is super big, after all. Now the Council is out to kill you as you try to navigate their headquarters, a building inexplicably filled with deadly lava and spikes. Move and jump with [WASD] or the [arrow] keys as you make your way to the door at the end of each level, and click your mouse to fire your gun at any enemies along the way. Rather than bullets, the gun fires a spray of noxious black liquid, and the recoil propels you around at such speed it can also be used to lift yourself into the air, useful for getting past those huge lava pits. The game centers around this mechanic, setting it apart from most shooters, and it's a similarly fun change from the pixel perfect jumping some retro platformer games require.

Super Big Gun Adventure is quite short, with only 12 stages, but regardless of what the Gentlemen's Council think, size doesn't always matter. Although cheap and possibly off-putting innuendo is plastered on during the ending, the smooth gameplay, solid physics, and responsive controls make for an enjoyable time waster and perhaps leave the way open for a lengthier sequel. Bravo!

That difficulty curve is something else. Easy, easy, easy, LEVEL 11 OH MY GOD.