"The people of the village began to gather in the square, between the post office and the bank, around ten o'clock." If you've ever read The Lottery, or one of its numerous clones, you should be familiar with the rise of the hairs on the back of your neck, the creeping sense of fear. Welcome to Strange Cases: The Tarot Card Mystery, a game that manages to convey that overwhelming sense of dread so well you may find yourself glancing over your shoulder in paranoia as you play. 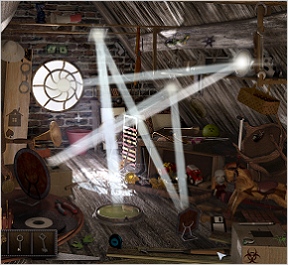 "It was a dark and stormy night..." Okay, enough of that. Strange Cases: The Tarot Card Mystery is a new hidden object/adventure/mystery hybrid by Sulus Games. You play FBI agent Claire Ellery assigned to a case in a fishing village so small it can't be found by GPS, which should be your first hint that something's rotten. You've been called out on the case of three girls who have been kidnapped. The local police are uncooperative, and a mysterious stranger keeps leaving you odd clues on tarot cards scattered around the place. What's an FBI agent to do?

At first Strange Cases: The Tarot Card Mystery seems to be a pretty generic story: basic kidnapping, uncooperative local authorities, dark and spooky small town, etc. Then the mayor and doctor start acting suspiciously and it goes downhill from there. Like all hidden object games, there will be lots of items to find. Unlike most hidden object games, many of the items are actually useful in your search for the culprit!

Tarot cards you find will either give a written list, a group of silhouettes, or an object (or objects) of which pieces need to be found. It's a lovely way to integrate the hidden object lists into the game without breaking stride. Some scenes will include all three types of tarot and you can work back and forth between the cards or concentrate on just one. Some items go into your inventory and will become useful later. Navigation is either by moving within the scene (indicated by an arrow mouse change) or through handy Polaroid photos that accumulate in the case file. Just click on a pic to return to that area. 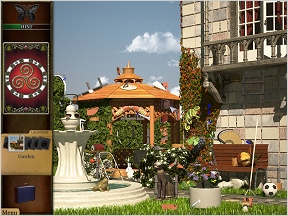 Analysis: There are many, many hidden object/adventure/mystery hybrids out there. What makes Strange Cases: The Tarot Card Mystery any different? The story. The artwork. The mini-games. Oh, and how all three are seamlessly integrated.

Although the basic plot has been done many times before, as you work through the narrative it begins to dawn on you that there is indeed more going on than the game tells you. This happens gradually, in the tradition of the best horror/mystery stories. The art for the dialogue scenes has a lovely washed hand-painted feel, while the HOG scenes are bright, clear, 3D and photorealistic. Surprisingly the two styles work well together, each heightening the mood of the story. The mini-games lean heavily towards logic and puzzle solving rather than just being iterations of games you've seen before. There's at least one mini-game/puzzle that could have been lifted directly from a room escape game.

Hidden object scenes themselves are a pleasant surprise. Each view is bright and clear, with very little clutter. No burying objects ten deep in a room and trying to find something in the resultant mess. A refilling hint timer is always welcome, as is a skip function for the mini-games. There's also a handy mute feature in the options if the atmospheric music and sound effects become annoying. Handy cursor changes round out the playability of the game. A magnifying glass will let you know when something needs to be investigated further, a rotating gear will indicate something that needs to be manipulated, and an arrow points the way to other areas to explore. 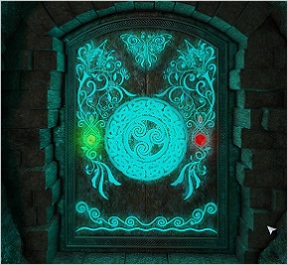 Unfortunately there are a few minor problems that can detract from gameplay. The "click area" when picking up items in the hidden object scenes is so tight that the point of the mouse cursor needs to be directly on an object. Multiple incorrect clicks will result in a spinning cursor, forcing you to slow down, and this can happen quite often even while trying to pick up the correct item. Broadening the click area would have been a good idea. The story itself, while fantastic, is way too short. You will leave the game wanting so much more.

Seamless integration, though, is what makes Strange Cases: The Tarot Card Mystery stand out from the pack. From the dialogue scenes to the hidden object scenes to the mini-games, everything flows so easily that you might find yourself several moves into a mini-game before you realize what has happened, leaving you to enjoy the deepening sense of paranoia. Are the cops in on it? The Mayor? Everyone? Play Strange Cases: The Tarot Card Mystery to find out.

Super-awesome-wooty-tooty-flip-bam-booty to Kayleigh for this awesome walkthrough! \o/!

Good game, good design & style, but a bit on the short side. An extra hour of hidden object gameplay could've put this on the A list.

I agree with Corona with regards design and game play. It is engaging and not one of those games that are intensely frustrating because the item on the seek list does not match the item you find.

You can skip parts which is always handy.
All that Grinnyp said is spot on so not ,much to add except following Corona's comment about length of game I doubt I will buy the full version if after the demo hour there is only a further ten minutes of play left in the game

I'm pretty good with this kind of games and puzzles and I would guess, that it took me (without the time for writing notes for a walkthrough, that will be online soon) about 4 - 5 hours. At least, when you do the puzzles and not skip them ;).

I'm at the carnival and just got a handle from the shooting gallery. I have no clue where to use it thought, and the hint only tells me that I need the joystick for the machine, but not where to get it. I can't find any gears indicating a puzzle anywhere, so I'm completely stuck.

I may have given the wrong impression. It's not a short game, but short-ish. It's longer than a Dream Chronicle game but certainly not as long as Return To Ravenhurst or Amazon. When I played the demo I was nowhere close to the middle of the game when it ended. I bought the game and finished it in another 3 hours, that includes skipping a few of the minigames.

Click the sign "Warehouse", in the back, right next to the tent. You will come to another location

Super-awesome-wooty-tooty-flip-bam-booty to Kayleigh for this awesome walkthrough! \o/!

I've been having extreme difficulty on one part. It's not because of the fact I haven't solved it...

I can't seem to place the oval mirror in chapter 5. I've done it over, and over, and over again. It just will not lock into place, despite me dragging it over where the gears were...

Any suggestions? It's driving me crazy I can't progress because of this.

So far, other than that, this has been a decent game. Can't comment on the length seeing how I'm stuck presently.

What you need to do is:

Pick up the mirror and hover your mouse pointer between the tines of the mirror stand. Move it around very slowly until the words "mirror stand" appear, then click. The mirror should snap into place.

Just played this game and while the graphics were stunning and the story really cool, it was extremely short. My sister and I have played most of the mystery case files games and many many hidden object games and this was the only one we've ever finished in one sitting. We were actually about to stop playing and come back tomorrow, but when we couldn't stop, we found out there was literally only like five minutes left! I'm pretty sure this only took us 2 hours, possibly less, to beat.

That said, it's still worth it to play for the awesome female protagonist and brilliant twists. It's just sad they didn't do more with this game 'cause so much more could've been done. I love the logic puzzles and I wish there were more in it...

Please, How can I skip the Hall's puzzle, because I don't understand it!!!!

Are you talking about the hall in the abandoned house? If so, the walkthrough above has a pretty good explanation under Chapter 4. Most puzzles, if you look closely, have a "skip" button in the lower right of the close-up screen.

I am in the attic with the mirrors. I've looked at the guide and think I have done everything correctly, but the light is not reflecting into the mirrors and I cannot skip the puzzle.

What else should I have done?

The placement of the first mirror is critical, and easy to mistake. Make sure that you haven't mixed up the round and oval mirrors. Can you get a screenshot of what you have?

Strange, when I started the game again the mirrors were working and I got through it. Thanks!

Please help me!
I have a problem in the 1st scene: I can't pick up the last par tof the tape (the one which was next to the red tarot card). Do I have to move the dumbbell? I already have the other parts, but this one doesn't work. How can I get it?

Katinka-last part of the tape
There is nothing else you have to do, then clicking to pick it up. When it does not work, try to restart the game. Sometime it also helps to start new a new profile.

And when nothing else helps, the best idea always will be to contact the customer support of the page, you purchased the game from.

I'm having the same problem. help! how do I get to the new location?

The trick with the gargoyle horn is to put the tip of the horn on the side where the flat part of the horn is.