There's something about one-button games that's really appealing to some people, myself included. It's not that I'm so lazy that I enjoy playing an entire game pushing only one button, or that games like this are intrinsically simple. In fact, I believe it's the opposite. A game that's designed around just one button to control all the elements and variables of that game is one that the designers really had to put some thought into (dreadfully simple games excluded). 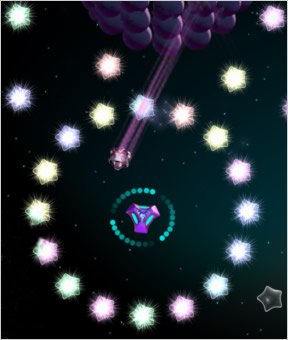 And that's exactly what the folks at Orb Games did in their quietly-released new download, Stardrone. It's a multi-genre game, featuring a mix of arcade action, pinball, breakout, gravitational physics and collect-the-objects. Might sound a little confusing, but the game simply boils down to you (a ball) lighting up stars to reach an objective.

Simple? Yes. Boring? Surprisingly, not at all. In fact, Stardrone is a game that has the unique ability to appeal to both action junkies and puzzle-lovers alike. Within just the first few levels, you'll be met with a barrage of visual stimuli while a spacey-techno track thumps along. Some might find the graphics stunning, or at the very least, impressive. Effects like particle blur, shimmering and bursting effects really bring the playing field to life. Levels are painted with bright, vibrant colors set against the backdrop of deep space. You control the ball solely with the mouse button, albeit indirectly. Once the ball is launched from its starting position, it shoots through a maze scattered with "gravitational nodes" placed in key locations. 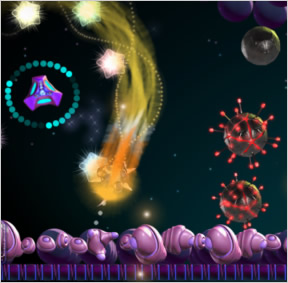 When the mouse button is pushed, the nodes are activated, and the ball is attracted to the nearest node using a watered-down gravitational physics mechanic. This allows you to control the ball by a series of well-timed mouse click-and-releases, causing the ball to change course, orbit a node or slingshot off in a different direction. You "catch" the ball by attracting it into orbit, then wait until its trajectory is lined up with where you want to send it, firing it away towards stars or objects. Catch it in orbit again with another node and repeat, eventually finding a nice rhythm so that you can keep the ball moving from node to node without keeping it orbit for more than one cycle or so. The reason the physics are "watered down" is for the benefit of the player; if it were as realistic as some of those planetary web-toys out there, you'd have a much harder time manipulating the trajectory of the ball.

The overall objective of the game is to light up a certain number of stars (and sometimes collect gems) in each level and get to the exit portal. Missions vary from level to level, sometimes requiring you to light every single star on the level, gather gems and make it back to the portal, while other times you'll just need to target your ball through a series of obstacles to make it to the goal, lighting stars along the way to raise your score. In other levels, you won't even need to make it to a goal; you'll just need to light the stars without being destroyed. A handy map in the lower-left corner displays helpful info like star positions, your location, nodes and more. Once you're down to just a few stars left to light, a circle pulses around their location on the map to help you find them. Obstacles in the game can be as simple as the walls of the maze you bounce off of, or as deadly as a layer of spikes that destroy your ball on contact. Enemies in Stardrone range from stationary satellites to the moving variety, all of which can destroy you if you don't destroy them first. Power-ups allow you to transform into a spiked wrecking ball, letting you rip through enemies and destructible objects like tissue paper. There's a bunch of other environmental elements as well, like turbo-booster lanes, pinball-style bumpers, rails that catch your ball and shoot it spiraling down the course, and more. 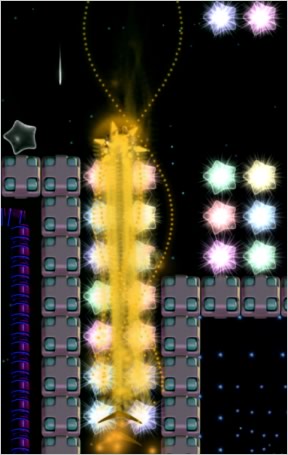 Watching your ball blast through enemies, light up stars and dizzyingly zoom through spirals is a bit reminiscent of the classic Sonic the Hedgehog games. Many gamers fondly remember Sonic as a turbo-charged, enjoyable distraction from the majority of games—even today—that move at a snail's pace (comparatively speaking). On the last title screen, there's a game speed slider that allows you to control how fast the action is. To get the full experience, I recommend you set it to the max after you've played a few levels to get your bearings. Half the fun of Stardrone is the speed factor; getting "in the zone" as the background becomes almost a blur, knowing that just one slip up at that speed and you'll hit an obstacle like a brick wall, destroying your ball. There's plenty more elements to the game; too many to mention without spoiling. Just a few examples are things like traps, angle-shifters, gate passes that need to be opened...more than enough to hold the average gamer's attention.

Analysis: Stardrone is a solid game, through and through. The graphics are well above par for such a conceptually basic game, even featuring some nice emulated depth backgrounds that give you a feeling of spatial relativity. More importantly, beyond the graphics lie a fresh new game idea, one that's executed almost flawlessly, giving you the impression that the developers spent a suitable amount of time in beta testing before releasing the product to the public. It's a game that can be played and enjoyed by virtually all age groups and most importantly, the novelty doesn't wear off after a dozen or so levels. As difficulty increases, so do new game elements, so you'll always be discovering new elements throughout the game's 50+ levels. The designers were also nice enough to implement a targeting overlay that constantly displays the trajectory the ball will follow whenever it's attracted to or released from a node. It seems like just a minor enhancement, but without it, players might have become frustrated too quickly to give the game an honest chance.

It's difficult to pigeon-hole this game into a genre so that it can be suggested to a particular fan base. Most of the time, that attribute is a shining example of a game that's just plain fun, instead of merely being enjoyable for a particular type of player. It also lends itself well to periodic play; just a level or two a day when you need your tactile action fix. The best I can do is recommend that unless you only play point-and-click or escape-room games, you'll want to give Stardrone a try, if for no other reason than you haven't seen anything like it yet!

Took me a minute to figure how to control it, but once I did, wow what a great game! I hit a learning curve snag at level 10. This is more fun than Peggle!

Man, this game is wicked. I like the way the trajectory tracker works. Thanks for the recommendation, as I was looking for a game to use with my last Big Fish Game Credit.

Very fun, and very much like Peggle in a way.

I'm happy Jay finally gets money for his troubles of keeping up this darn fine blog for so long, but lately semi-biased bloated reviews of commercial games seem to be taking over.

Oh, well. It was good while it lasted.

I kind of agree with baba4473, there is a lot of commercial games being reviewed nowadays, making it less enjoyable to see what new games you have for us, Jay.

That said, I'm pretty glad that I took the chance and downloaded the demo this time. This game is fun, addictive and seems to be worth the time and cost. As good if not better than Peggle.

So far I can't find anything to really dislike about it, so I'm definitely going to be using up some of those bigfish credits.

I'm pleased you found something you enjoy.

As for the number of reviews for commercial games, we made an exception for Virtual Villagers this week and published our review and walkthrough guide mid-week. And I did expect to receive some fallout from it. This was not an ordinary week as it was a bit heavy in commercial releases.

That said, we will continue to highlight the best of what's available out there, free, commercial, indie, whatever.

Free, browser-based games during the week, downloads (both free and demos) on the weekends. We've been doing that for months now and it's working well for us.

If you're referring to this review in particular when you say bias and bloated, I just wanted to let you know that any bias that might have shown up STEMMED from a objective review. I had no expectations when I started this game, but I found it to be really fun and enjoyable. (And looking at comments so far, so do other people.) So in that regard, yes, a writer's review does turn bias (or more aptly, subjective) after an assessment has been made and an opinion can be made. That's the difference between news and reviews.

About the recent boost in commercial game reviews-

As a contributor who wrote two purchasable game reviews in a row this week--Robokill and Stardrone--I'd like to comment on the above feedback.

What Jay said is spot-on, the last week or so happens to be an exception to the average review pattern and format. It was merely coincidence that so many review-worthy purchasable games came out over the last week or so. As any longtime reader of JiG knows, myself included, is that normally commercial games are only reviewed sparingly on over the weekend. Oftentimes there are even regular free flash game reviews sprinkled between them during the weekend too.

Don't let the last week and a half scare you into thinking that anything is changing regarding the frequency of commercial games. It was just coincidence that we found a handful of them at the same time, and also that they all happened to be timely in nature; we couldn't deprive the audience of some of those major releases.

I hope this eases your mind a bit.

I wonder why Big Fish never 'introduced' this game on their daily games page. Do they have a secret hidey hole page where only privileged are allowed?

Cool game. I think its a nice evolution of the pull-star mechanics that you see in Super Mario Galaxy. The watered-down physics model is pretty much the same i.e. you only experience gravity from the planet/star you're clicking on. I was kind of let down by the lack of pull-star puzzles in Mario Galaxy so this game fills that need.

Need help in completing the waves level, cheat code? Bypass code? Anything, I am desperately frustrated.