Mmm, delicious time management games. If slinging burgers, serving tacos, or making cakes doesn't get your appetite going, you probably need to play a little longer! Stand O'Food 3 is a new time management game that puts you in the chef shoes of Ronnie, a mega-talented restauranteur whose skills at making eateries popular rivals that of every other time management game hero! Now it's your job to run a series of burger joints that, apparently, sell burgers the size of a couch cushion. Business is booming, though, and you'll have a great time serving food and pleasing customers in this casual game! 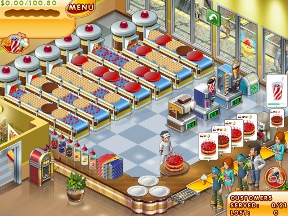 Stand O'Food 3 gives you fewer things to worry about than many time management games, and the main focus is on getting the order done in the correct order. Customers saunter in your cafe and display a picture of what they want. Most orders are things like chicken burgers with a drink, or some ice cream with a bacon burger. Later restaurants change the food around, but the concept is the same. The conveyor belts at the top of the screen seem to know exactly the ingredients you'll need to serve the customers of the day, so all you have to do is build the orders one by one and Ronnie will take care of the rest!

Doing things in the right order is the key to success. So, for example, you can't put mayonnaise on top of bacon and slide the bun on top of that. Customers simply won't accept a botched order, so you've got to use recycling bins and queue plates to your advantage. Swap food and get everything right to send each customer on his or her way. They have limited patience, so pay attention!

Between levels you get to spend some cash in the upgrades shop. Refill your sauce jars, buy new and better french fry machines, soda fountains, jukeboxes and queue plates to make your daily life a little bit easier. It's up to you what you purchase, but at the beginning of the game your options will be pretty limited, so grab what the game suggests. 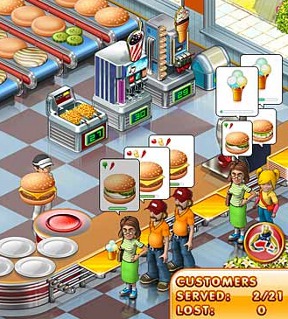 Analysis: Stand O'Food 3 aims for simplicity, and that simplicity is what gives it such a wide appeal. You don't have to perform every little action in the game to win, so let customers order their own food, pay you on their own, and sit down of their own accord. You just focus on the food! At first it's all about burgers, but later you get to serve different kinds of food such as chocolate, lasagna, and pie. Mmm, pie...

One nice feature in Stand O'Food 3 is the option of choosing between three difficulty levels. Switch it to "easy" if you really don't want a difficult time at all, and pump it all the way up to "difficult" if you're a time management veteran and area ready to get your burger building skills put to the test.

There are plenty of restaurants to complete in Stand O'Food 3, each one with four levels to work through. That adds up to several hours of gameplay, more if you're playing on the highest difficulty and have to trudge through each challenging stage. The gameplay remains largely the same, which is a bit of a downer once you hit your stride, as nothing really comes along to break the late-in-the-game monotany. But by this time you'll already be hooked, so new gimmicks aren't as much of a concern.

Stand O'Food 3 aims to be an accessible, challenging (or not!), and unique time management game based on the simple concept of food order. It pulls this off without a hitch and provides a great experience from beginning to end!