Bikini Bottom is covered with a noxious green ooze after a blinding light fills the sky, and everyone has gone missing!... well... except SpongeBob. He's around. *snicker* Get it?! A-round?!... forget you guys, he would love that! SpongeBob Marbles and Slides by Gilded Skull Games for your iOS or NOOK Tablet is that rare breed of tie-in game that gets almost everything right, from the all-important plinky-plonky soundtrack and beautiful style to the most important ingredient... fun. A physics puzzle game with pinball elements and its own quirky storyline, this is one top-notch casual mobile title fans of the series and the genre alone will want to check out. 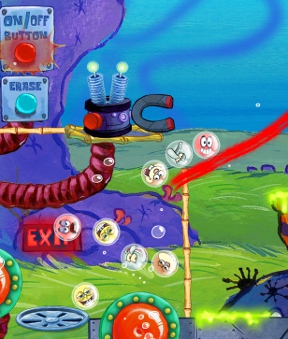 Something weird is afoot (or aflipper) in SpongeBob's beloved hometown... everyone has turned into a marble, and a vast network of underground pipes has appeared. There's only one itty-bitty megalomaniacal genius that could have caused all this... but SpongeBob and crew are going to need a little help getting around if they want to get to the bottom of things and restore the town. In each level, your job is to guide all (or a specific number) of marbles safely to the drain leading to the next level. Draw paths on the screen with paint to direct the marbles as they roll, tilt your device to guide them along, and make use of other devices like time-stopping buttons, super-magnets, and more. If you lose your marbles (literally) by allowing them to fly offscreen or fall into the toxic goo, you'll have to restart the level. Sounds daunting, doesn't it? You can do it! Come on, say it with me... I'm ready, I'm ready, I'm ready, I'm ready... 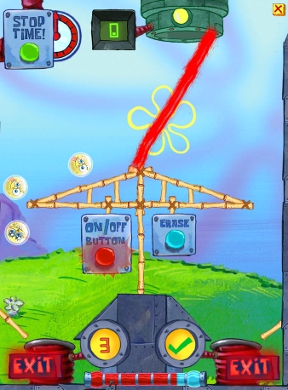 Analysis: SpongeBob Marbles and Slides is one of those rare games that give you hope for affiliated titles as a whole. Despite its cartoon roots, it doesn't feel cheap, rushed out, or insultingly simple. It is, actually, pretty darn great. Loaded with the show's signature style from the visuals to the music and packed with creativity and charm, it manages to balance being both true to form while serving up something genuinely unexpected. The fact that they actually went ahead and wrote up an appropriately bizarre storyline to explain the game concept is great, and so is the chatter between the characters at the beginning of levels. (I appreciate you Squidward.) More importantly, however, the gameplay is unique, fun, quirky, and even a little challenging at times, though kids will certainly be able to master it with a bit of determination.

The different elements introduced across the many, many levels help keep things fresh and interesting as well, though you'll doubtless has a few you'd rather see more of, and even some you'd rather see a lot less of. The physics are, for the most part, reliable in a way that generally means any difficulty you encounter is probably because you're going about solving a level the wrong way. The achievements feel a little random and token, but the real reward is seeing even more of the beautiful, clever design as you play and uncovering more of the oddball story. SpongeBob Marbles and Slides will doubtless be enjoyed most by fans of his cartoon adventures, but thanks to some genuine heart and effort by the talented folks at Gilded Skull, this is one physics puzzle adventure that's easily recommended to everyone. It's pure goofy, joyous fun, and sets a new standard for media tie-in games that will be hard to surpass in the future.