It must be startling to learn, upon reaching adulthood, that you are actually a princess rescued from a castle before a great evil befell it. Especially if you learn at the same time you must begin a quest to save the castle and the kingdom from the doom that descended all those many years ago. Thus begins the adventure/hidden object hybrid Spirits of Mystery: Amber Maiden, the latest offering from ERS Game Studios, creators of the Puppet Show series and the more recent hidden object adventure game, Shadow Wolf Mysteries: Curse of the Full Moon. 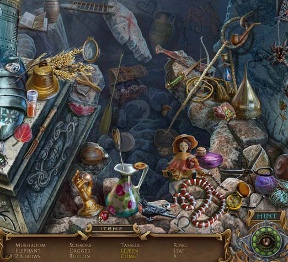 The game begins with a gorgeous animated sequence that explains the story so far. According to the loving nanny who raised you, when you were a babe in the cradle, an evil witch attacked the castle, freezing its inhabitants in amber before they could defend themselves. Fortunately for you, your dear nanny had hair-trigger reflexes and managed to snatch you from the crib and flee the scene before the same fate could befall your royal person. Now you must figure out how to travel to the castle without drawing the attention of the evil witch (still in residence), and one-by-one free each person and thing from their amber prison, thus saving the kingdom. Along the way you will also encounter the witch more than once as she taunts you with what she claims is your ultimate fate, sharing the doom of the rest of your family and kingdom.

Gameplay is the standard found in most point-and-click adventure/hidden object hybrid games. Click on things of interest to examine them, pick them up, or to travel to new locations. There are also a plethora of hidden object scenes, each one yielding a single useful item that will be helpful somewhere down the road. There's a journal which records things that you have seen which is helpful when running into some of the puzzles, and a large inventory to carry the many, many objects that you will be picking up along the way. Included is a handy refilling hint timer and the ability to skip the puzzles and mini-games after a certain amount of time has passed. Along with single useful items (hammers, jewels, etc.) you will also be collecting multiples of other items that you need to activate some of the puzzles. In the end you will hopefully succeed in freeing both your family and the kingdom from the curse of being encased in amber for eternity, useful only as pretty statues or very heavy jewelry. 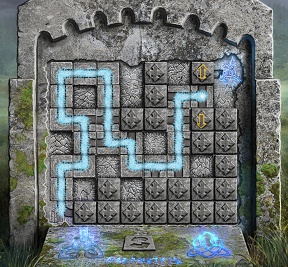 Analysis: I can hear the chorus now: "Not another adventure/hidden object hybrid with a princess fighting her way into a castle to free her family! It's been done a million times!" Yes, it has, but rarely with such style and atmosphere. Spirits of Mystery: Amber Maiden is a cut above most of the herd with its stunning graphics and absorbing gameplay.

To begin with the visuals are out of this world, especially the long shot vistas that you will encounter as you travel towards and inside the castle of doom. There is a stirring soundtrack that plays when you are inside the hidden object scenes and when you have finally breached the castle walls, but one of the joys is that when you are in the great outdoors the music gives it a rest and the incidental sounds take front and center. The whisper of wind through the grass, the heady buzz of insects, the lyrical birdsong, the gentle crash of waves upon the shore, all of these and more play out during the outside scenes, adding an eerie atmosphere and really driving home the fact that there is not another living soul around for miles. Another small but delightful detail are the doors you encounter along the way. Hover your cursor over one of these doors and they will creak gently open a crack, sending shivers up and down your spine as you explore this desolate world. 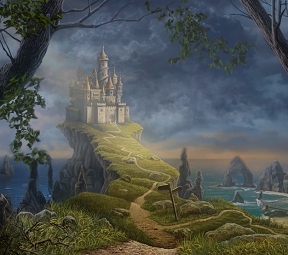 The gameplay is smooth and seamless as you transition from one scene to the next, opening up new areas to explore. The castle, especially, is large and you might get lost more than once as you wander around attempting to find all of the items needed to accomplish your goals. A handy changing cursor indicates items that can be examined, things that can be taken, and places where you can travel. Hidden object scenes are indicated with a magical blue shimmer rather than the traditional shower of sparks. The hidden object scenes themselves are detailed and intricate, and not everything is in plain view. The player will have to interact with certain portions of the scene to reveal objects that are especially hidden (which show up in yellow text in your object lists). The puzzles, while familiar, make an effort to add either an extra twist (such as a match two puzzle in which the pieces rotate every time you make a match) or just add a bit of humor, like the Simon puzzle that involves a giant octopus one-man-band. The story is made up of seven main chapters, each requiring quite a bit of traveling back and forth amongst the echoing, empty rooms or hauntingly quiet spaces.

Mind you, Spirits of Mystery: Amber Maiden is not a perfect game. The hint timer refills slowly, even in regular mode. The story has certainly been done before, although ERS Games has made an effort to throw a bit of a twist into the ending. The puzzles are pretty familiar variations on ones that have been done before many, many times. And what is up with the taunting of that evil, nameless witch? Why in the world does she show up to cackle about the princess' eventual doom and then disappear, rather than just killing the girl on the spot?

With its high production values, haunting music and sound effects, and amusing twists on classic puzzles Spirits of Mystery: Amber Maiden offers a lot of fantastic adventuring and hidden object gameplay. The beautiful scenery, the competent voice acting, the amusing animations and the fine interface guarantee lots of fun for fans of the genre. So take some time and explore this gorgeous world while saving the kingdom from a fate that is, while visually very pretty, in reality not all that pretty.

Note: Spirits of Mystery: Amber Maiden is currently only available in a Collector's Edition, which includes concept art, wallpapers, screensavers, music clips, and a pretty hefty extra adventure to help completely wrap up the story.

Is it just me or is this trend towards having an "endgame" that isn't actually in the standard game starting to feel avaricious rather than anything else? Imagine if you bought a DVD of a movie and the last ten minutes were missing because you didn't buy the "collectors edition"?
(Yes, I realise that these "endgames" aren't quite the same but it still feels wrong.)

"Yes, I realise that these "endgames" aren't quite the same but it still feels wrong."

I think you're being too generous. Your DVD analogy is enitrely apt.

In the three Collector's Editions I've played the endgame portion of the story wasn't just a nice continuation of the main plot, it was the obvious and only conclusion. Having to finish the game where the regular content stopped would have been a complete anticlimax. (The Hound of the Baskervilles was the worst example, although that was bad for lots of other reasons - If you've made up a crazy time travel story about a magical dog why not give it your own title! We won't mind.)

I hate it because sometimes they say it's good cause you get a "good" ending. Take Dark Flight, Phantasmat and 13th Skull for example. If you don't buy Collector's edition you don't get achievements and the game ends badly.
There just "applying effort" to get some extra cash.

Okay I'm playing the demo and am stuck at the rock. Nothing in my inventory is helping me get past it. What do I do, please?

In this case, though, the story wraps up pretty neatly. The kingdom and all its people are freed, the evil witch turns out to not be evil at all, simply posessed by an evil ring (and the missing younger sister of the king), bells ring, fireworks go off, and everyone lives happily ever after. The "extra" gameplay doesn't really add anything to the end, it is a true side quest involving the origin of the evil ring. In this case, I consider the "extra" gameplay done right. In other words, if you bought the regular edition you'd never miss it and it wouldn't mess up or detract from the ending. However, its addition really does round out the story without taking anything away from the ending. Other games (MCF: 13th Skull and Drawn: Darkflight) can't necessarily claim that.

Could you be more specific? Where are you in the game and what rock? The one by the seaside?

Yes, please. It's basically at the very beginning. I got out of the cottage and am on my way to the castle, but the rock on the side of the cliff needs something to break it in half. Nothing in my inventory works.

This is a nice game, I'm tempted to buy it. But until I do, the strategy guide can't be accessed. And because the guide is included with the full game, nobody will ever bother to put up a walkthrough.

Well, I am working on a walkthrough, so no worries there. What you need to do:

Have you been up to the front of the castle? There's a hammer there, hidden behind one of the pedestals. Take the hammer and go back to the beach. Use the hammer on a barrel to break it open and get a wedge. Put the wedge in the crack in the stone, then use the hammer and voila!

Ah, thank you so much! I was, er, afraid to go up to the castle because "oooh you will be seen"! lol

Need a strategy guide. I am in the castle and have several rooms done. I just cannot figure out how to open anything else up. I have tried hint in every room. And clicked on everything as well for two days now;. NADA. Thanks any help would be greatly appreciated. have gotten through the kitchen and finished the little boy the dog and the fountain.
That is is where it quit.. I have gone back to the beginning to see where i missed some toy fish and a bell. NADA...