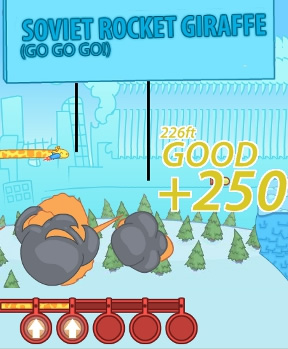 Those gosh-darn Giraffe-neck-extending Russkies are at it again! No longer content to simply stretch their ungulates up through the stratosphere, now it seems that they won't be satisfied until they've gone across the horizontal horizon as well. Yes, it's Soviet Rocket Giraffe (Go Go Go!), an amusing new launch platformer hybrid from Jmtb02, a guy who knows a little something about launching animals into space. And while some of the elements are more than a little familiar, there's no finer forgotten chapter of the space race than this, comrade.

A mesh of the mechanics of Canabalt and Tiny Wings, the explosions of Toss The Turtle , and the pure insanity of Aggressive Alpine Skiing, Soviet Rocket Giraffe tasks you in the role of a giraffe test-subject forced to grind and leap his ever-longer neck over the sky-roads of the Soviet Empire. For Science! Once your head is launched, you move across the landscape, trying to get as far as you possibly can. The up [arrow]/[W] boosts you up for a jump, while down [arrow]/[S] sends you diving and grinding into the sky-pavement. Travel far or grind long enough to earn double jump-boosts, also activated with up [arrow]/[W]. Points are scored for well-timed jumps, distance leaps, and getting as far as you can without crashing.

The fact that Jmtb02 is so well-regarded in the flash gaming community (an honor which, let's face it, is only slightly above being well-regarded in the stamp collecting community) seems like it must be kind of a mixed blessing. He has released so many innovative, even revolutionary, games that one that is merely short, familiar and fun seems to suffer by comparison. However, if Soviet Rocket Giraffe feels a little superficial, it is by no means not enjoyable. This is a game that you play for twenty minutes on a work-break, chuckle at the humorous rankings and animations, repeat several times to see all of the rankings, then return to work satisfied with your snack-sized portion of gaming consumed. Sometimes, that's all you really need.

I really like the art style and the silly concept, but the game needs some kind of ramp up in difficulty after a certain point. It's virtually impossible to die, I scored 80 million points on my third try before plummeting into the cold Soviet snow on purpose.

Pity they've disabled the option to change the rendering quality. Anything this picky on timing needs to ensure that it runs at optimal speed, or you're going to lose to lag.

It would also benefit from having a larger viewing area, specifically increasing what you see ahead and below. The interface gets in the way, especially when you're running on extreme hang-time with your last jump -- timing your landing is essential, and hard to do when you can't see what's under you.

An interesting idea, but the execution needs a little work.

I can't figure out how to make the giraffe jump. I press the up key and it doesn't work. Sometimes it will jump, and other times, it doesn't register at all. The down key works, though.

There's very little explanation of how the game is supposed to work. All in all, a very shoddy effort.

Not a bad 5-minute game, but I have to just not think about the fact that this comes from the same developer as the stellar Exit Path.

I prefer to consider this a doodle on the back of a cocktail napkin.

On my FIRST launch, I earned 26.5mil points, EVERY good achievement, and the screenshot to prove it.
I think the game's not /quite/ as polished as it should be...

I'm in the group that thought it was cute, but had to suicide to end it when I grew bored.

It's not that you need fewer jumps or longer pits, there's just no interesting obstacles to navigate to make the first few jumps different from the last few. Every pit is pretty much exactly the same as the one before it.

The animation is absolutely adorable, though! I love the one researcher that is perpetually smiling.

There is no difficulty to this. Most of the platforms you have to land on you don't even have to jump to get, or you can hold down constantly and jump to just build up multijumps for when that doesn't work.

There is a battle going on around the giraffe, why isn't he part of it? I mean, if there was a goal or obstacles, this would be a better game. But this is just a mindless, point getting arcade game and the theme has potential for so much more.

Did anybody else pick up on the