It's every young Infernal Princeling's dream: round up some Legions, grab a couple of Places of Power, maybe an Unholy Artifact or two, and see your enemies fall before you on the road to conquest. Eventually, you end up Top Dog of the Underworld, a mover and shaker in the Sunless Realms. Of course, no one ever explained to you the endless intricacies of Hellish Politics, the constant demand for tribute, the complexities of the management of a properly demonic estate. You thought that ascending (descending?) to the Throne of Hell was going to be easy? Solium Infernum will make you think again. 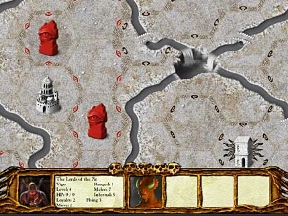 Solium Infernum is a turn-based strategy game of infernal conquest from Cryptic Comet that emphasizes a deep, rich, turn-based system to deliver an incredibly complex and flexible strategic experience. It has sort of a Risk-meets-Dante's-Inferno flavor to it. Unfortunately, all that depth and richness comes at the expense of some usability and clarity issues: this is definitely not a "casual" game. Forget "diving right in," because just getting a character off the ground is a challenge, and the lack of a tutorial doesn't help matters. Of course, the 30+ page manual is a good place to start...

The first aspect to the game is character creation. Players can use one of the two default avatars provided, but it's worth going through the character creation process to get a sense of what's available. Avatars buy statistics like Military Prowess, Wickedness, or Charisma from a pool of points. They can also spend those points on traits that give them bonuses in certain situations, or take flaws that will give them more points to spend. Players who are just getting into the game are advised to invest heavily in "Charisma," because it increases the amount of tribute you get, and thus the amount of stuff you can buy.

Once you actually get into the game, you'll see that you control one Legion and one Stronghold. Your Stronghold is your home-base, and if you lose it you'll lose the game, so make sure it's protected if you're in conflict with any of the other players. Your Legion is your basic military unit, but it's probably pretty weak. Play proceeds with players giving up to six orders per turn (players start only being able to give two orders per turn, but will gain the ability to give more orders later.) Orders are given on specific phases, and then are resolved first-in-first-out, which occasionally means that other players will preempt your orders and render them moot. (For example, if Player 1 gives an order to move a Legion on phase 2, he will lose that order if Player 2 has given an order to bribe that Legion on phase 1.) 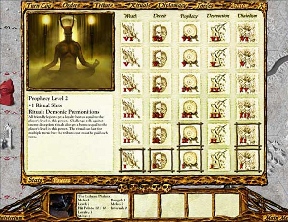 Probably the most important order in Solium Infernum is "Demand Tribute" which causes your minions to go out and collect random bits of resources for you. At the beginning of the turn after you give the "Demand Tribute" order, you'll get to pick through your minions' findings and chose the resource cards you want. You can spend these resource cards to bid on Praetors or Artifacts (which can be added to Legions to make them stronger,) as well as cast Rituals, bribe Legions, buy up your own statistics, etc., etc., etc. Really, the variety of possibilities is dizzying, and without a clear sense of what it is that you're trying to do, the game can quickly get confusing.

Analysis: It's a shame that Solium Infernum has so much trouble communicating goals and game-flow to the player, because it obscures the fact that Solium Infernum is an excellent game. There are three different paths to victory: win by politics, by force, or by some clever chicanery. There are literally hundreds of strategies that a player might try to implement to see their way to any of the individual victory conditions.

The political system, for example, is beautifully developed. Most basically, it forces players to chose between giving other players Prestige (victory points) or allowing those players to declare Vendetta on them. Vendetta is a state where players are allowed to steal territory from or use destructive rituals on one another, but the player who has declared Vendetta must claim a goal (destroy a Legion, capture a Place of Power, etc.,) and a number of turns, and is punished if he can't complete the terms of the Vendetta in time. Dedicated strategy players are, no doubt, already contemplating the possibilities for bluffs, blinds, and betrayals that a system like this makes possible, and this is really only scratching the surface of the possibilities inherent in the system.

Part of Solium Infernum's problem is visual. It's not much to look at, and while the art direction is very strong, the game's palate of muted grays, blacks, and reds gets a little monotonous at times. The menu systems in the game are very basic, and often a little confusing, and the game's habit of working confirmation buttons into intricate scroll-worked window borders means that they get lost easily, which can prove frustrating. Better visual design could have gone a long way to letting players understand the flow of the game, and the absence of a tutorial in a game this complex is positively diabolical.

That said, if you are looking for a deep, complex, turn-based game of back-stabbing, power-grabbing, and turn-trumping, then look no further than Solium Infernum, because it's got pretty much everything you could possibly want. If possible, play the game with some friends via e-mail to get the best experience possible, as the AI in this game can be somewhat lacking. Oh, and be sure to read the manual, otherwise Abandon All Hope, Ye Who Enter Here. Seriously.

This is a fantastic game, especially when playing multiplayer. For a less dense and much more entertaining introduction to the game, check out this excellent tutorial. Enjoy it, and claim vendetta upon your enemies with glee, you fleshy meatsacks!

There is a tutorial on the webpage. You should read it. its funny

Any chance that the dev may release a new version with new player assistance, such as a guided tutorial (printed one was funny, but not super helpful), tooltips, or cross-references to resource and attribute types? I'd love to play this, but it's far too dense for me to get into, much less drop $30 to buy it. :(

I'm pleased and surprised to see this on JiG. More of this, less Hidden Object! *grins*

Pity I cannot justify the rather weighty pricetag, for what it is ._. If it were shinily graphical in addition to the depth of gameplay, I'd be sold. Or rather, it would.

This game is in desperate need of a tutorial. The only order I could successfully execute was 'Demand Tribute.' Overall I found it slow paced and stagnant until I decided to quit.