Normally, when slimes and quests intersect, it's usually so that novice heroes have something harmless and cute to beat the snot out of (ahem) while they're still gaining their adventuring legs. But Letmethink's humble slime was not satisfied with this lot in life, and so, in celebration of Ludum Dare, he's set off on his own puzzle platformer adventure, appropriately enough entitled Slimey's Quest. His journey won't take him very far, as the theme of this Ludum Dare is "the entire game on one screen." But that doesn't mean he won't have plenty to see or do... Slimey's Quest, you see, is to push buttons, and every time he presses one down, his entire landscape changes! Using the [arrow] keys, hit every bright red button, squash a few baddies along the way, and navigate the ever-shifting landscape to prove you are the bravest slime to ever ooze your way along the trail! The screen might not move, but Slimey's ever-shifting world will keep you on your toes and him on his... droplets. 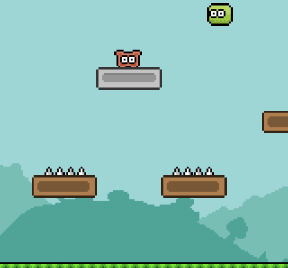 The single-screen theme and emphasis on button-pressing make the game reminiscent of John Cooney classics such as the Achievement Unlocked series and its sibling, This is the Only Level, and that's nothing but a good thing. Though Slimey's Quest is condensed, it makes good use of its space by constantly putting new spins on its one room. Every button you press changes up the stage, effectively putting you in a new "level," but certain features do remain consistent throughout. This gives the game a truly fluid feel, and watching the scenery evolve and slowly morph into something completely different is immensely satisfying. However, being a newly-minted Ludum Dare entry, the game is still rough-edged. The levels don't contain much in the way of gimmicks, and the momentum of jumping is sometimes hard to work with. Later level permutations include springs you'll need to hop on to make your jumps, and getting the right amount of distance out of them is a surprisingly precise affair. It's also over quite quickly, but for a game made in just 48 hours, that's not unexpected! As a self-contained game, Slimey's Quest is a tidy little morsel of puzzley platforming that uses its theme to great effect. But as a Ludum Dare entry, it's just begging to be expanded upon and polished up into something even more awesome.

Nice little game. I liked the fact that it was all in one scene.

Nice game, ok controls, but really not much new.

A solid platformer piece that's simply nonexistent in most games these days. They're as rare as gems now...

The single-scene setting and the way it morphed after each stage definitely added to the goofy fun of this game. The controls are not awesome right now, though -- I died in the scene with two brown platforms below a centered gray platform with a spring, and no matter how many times I tried, was unable to jump cleanly back onto one of the brown platforms without dying again on the spikes.

With a game this simple, I guess you want the controls to be a little fiddly in order to provide some challenge. But there isn't enough payoff for me to want to try a jump 75 times in order to get it just right.

Very neat concept! It reminds me a bit of This is the Only Level, though more organic in how it is presented.

I thought it was a really cool concept, and it felt just the right length for me (any longer and it might have started feeling repetitive). Neat!

Weird. Not one person disliking it?

Yeah, I got stuck at the part where you have to fall UNDER the platform to get the button with a spring in the middle that doesn't help. 200 deaths later, I quit.

I got stuck in a great bug. I pushed the red button and fell off the platform onto spikes that appeared as the screen was changing. Every time I respawned it was on those darn same spikes, so I immediately died again. :-P

I just sort of liked it. The platforms at the start were cute, but later when it just kept spawning simple configurations of floating ledges the novelty wore off.

Where are they coming from? What is supporting them? Why do these buttons keep appearing in an outdoor setting? I'd have loved to see some mechanical scaffolding a la Escape Goat to give the scene a little more complexity, or maybe have the some visual progression in the background to suggest that your button pushing is leading to some final form of the scene. As it was it was just too plain vanilla platformer with floating platforms.

Still cute and short enough that it doesn't overstay its welcome. The dev would be wise to refine the concept and come up with a more robust sequel - there's a good idea here deserving of more effort.

Hmm, I didn't find the controls fiddly at all? A couple of the jumps were precise, but definitely not a ragequit kind of exactitude. This isn't a humblebrag, there's platformers on JIG that are waaay harder (which I'm never going to get through)...

Anyway I thought it was very tightly designed, and the the controls were well-executed, not sluggish at all--which is especially great for an LD game. Agree that this could be expanded beautifully--as is it's just a tiny delicious morsel, but with a hint of story and some more mechanics/levels, it could go far.

@ Princess Sparkle:
If you're where I think you are, the trick is to

NOT try to fall under the platform (that's impossible)--instead, jump from starting platform to the middle platform with the spring on it. Don't use the spring, though--step to the left of it, onto regular platform, then you can jump to the button.

Should've been called "Slidey's quest", given the controls.

You can actually fall under that platform safely.

Also, if I recall correctly, the physics is just the same as any regular Stencyl platformer (except those with extra tweaks on initial jump speed), so, not sure if there should be any problem at all. Those yes, you need to run for some distance before you gain full horizontal speed.

Welp, I'll just get right to it then. Here is my review:

It's an okay game, but probably nothing that you will tell all your friends about. Presentation wise, the game is above average, with a very simple yet loveable art style. I can't greatly comment on it's musical score, however, as I have a lot of background noise, though what I do here seems to fit the game nicely.

The gameplay isn't much aside from your typical platformer, but it does have two things that it uses to spice up the gameplay. The first is probably the most obvious: The entirety of the game is held on a single, ever-changing screen. It's a charming touch, but it doesn't really change the way the game works at any substantial rate. The other major difference is how your character slides wherever he goes. With a few inconsistencies, this mechanic adds a lot of difficulty and realism to the game.

As far as the difficulty goes, it has a great standard of progression, being very easy early on and getting steadily more difficult.

The game is very short, and for skilled players it can be beaten in a few minutes. This wouldn't work well for a console game, but as this is a browser game it's length is easily forgiven.

There is, however, one major flaw. The controls can be extremely questionable at times. Particularly with running and jumping, you may often have a delay or simply not have the slime jump at all. It's not the worst thing ever, but in a slippery platformer controls mean a lot, and most of my deaths came from this. The checkpoint system can also often be wonky, but it's far less noticeable.

The game has a good deal of potential, and it seems to have been developed properly, but it isn't very polished, which leaves it only slightly above par. It's presented well and has a little innovation, but it still lacks enough to make it stand out. It's not bad, but it's nothing worth remembering. It's simplistic, short, and it's controls may feel off, but it has it's charm and a good deal of innovation that makes it enjoyable. I wouldn't play it again, but I don't entirely regret playing it either.

Yeah, it was definitely rough, but as I doubt I could produce a poorly-functioning Pong clone in 48 hours, I'm willing to cut the developer quite a bit of slack there.