When has mysteriously inheriting property, especially an abandoned manor on a private island, ever lead to anything good in a horror movie? Ricardo Chellini sees the event as a stroke of luck and a sign that his mundane life is finally turning around, but those of us with saturated with spooky fiction know this is right up there with buying a vintage car the last several owners died horribly in in terms of red flags. Artogon Games invites you to turn off the lights for another atmospheric and unnerving hidden-object adventure Shiver: Poltergeist. 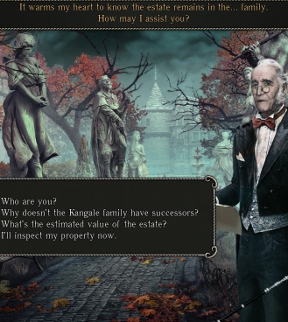 Because this is a horror story, you can expect that when Ricardo arrives at his newfound island everything is not lovely and normal and cheery. The place appears to be in disrepair, despite a very wall mannered butler, and there's also the issue of the strange lighthouse he can see from his new porch that gives him the creeps for some reason. When fiery apparitions begin making an appearance and Ricardo notices an uncanny resemblance between himself and one of the manor's former owners, he realises his inheritance might have more than a few strings attached. You can change the difficulty setting whenever you like under the options menu, so don't sweat over the choice at the start of the game. Gather items, solve puzzles, and try not to be too put off when statues start weeping blood and leaving notes of obsessive, threatening love. After all, in some cultures, that's the ultimate sign of affection, right?... right?... hm. This finally explains the restraining order I got from Steve Valentine.

Analysis: Vanishing Hitchhiker was a bit of a milestone in the hidden-object adventure genre because it proved those games could be genuinely scary. While Poltergeist doesn't have quite as many shockingly frightening moments, it actually does better with its atmosphere and pacing. The game is about as creepy as you can get, with corner-of-your-eye style frights, and the story is also more constrained this time around so the big scares and startling moments you do get feel like they have something to do with the narrative as opposed to just making you squeal. Poltergeist is also drop-dead gorgeous, with beautiful environments and artwork you always want to see more of. Combined with the occasionally excitable but otherwise beautifully moody soundtrack and the heavy atmosphere, you've got one genuinely immersive game... apart from the distractingly goofy in-game narrative text. Holy cannoli indeed. As a caveat, it's also worth mentioning that there are a few scenes that might be a bit nauseating for people with a fear of heights. 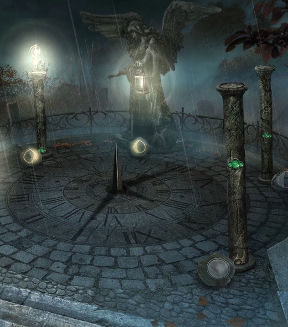 Though it takes a while to really get going, the story is actually a really intriguing driving force behind the game. You know almost immediately that you've got a vengeful spirit after you, so the gameplay focuses on finding out why in addition to getting out alive. In appropriate mystery fashion, it's all a bit more complicated than you might think after the first few clues. The gameplay itself, while nothing to really call original, is at least solid and engaging. The camera and flashlight make a reappearance, leading to more wonderfully creepy moments (though not as many as you'd hope), and while you'll need to solve a few puzzles and hidden-object scenes, there's much more straight-up adventure gameplay than you might expect. Naturally, this means you can expect a few obtuse item usage moments, but the hint function can help lead the way if you get stuck or just missed an interactive spot.

At close to four hours for the main game, Shiver: Poltergeist is a decent length, but like its predecessor also unfortunately suffers from having the game end on a cliffhanger that's only resolved if you play the bonus content available in the Collector's Edition. This bonus content also deals with the big fat question mark left over from the main storyline. While you could technically call it a day after finishing the main game and resolving the poltergeist issue, story completionists are going to be left disappointed unless they fork over the extra cash for the Collector's Edition, which is a disappointment. Still, though not quite as scary as Vanishing Hitchhiker, Shiver: Poltergeist is a brilliantly atmospheric, fun, and engaging game that marries a ghost story with a whodunnit murder mystery. Definitely give the demo a try, and don't forget to turn down the lights.

Continued in Chapter Five: the Lake.

Zoom in on the lantern held by the guardian angel statue.

The lantern should now be glowing.

Place the other four lanterns on the correct pillars:
Screenshot.

Note: the designs on the statue are in relief, meaning the darker shape represents that phase of the moon.

Continued in Chapter Six: The Manor

With the rings in place and the candle lit, the final scenes of the standard edition game are shown.

NOTE: for more story, continue to the bonus chapter of the collector's edition.

Continued in Chapter Five: the Lake.

Zoom in on the lantern held by the guardian angel statue.

The lantern should now be glowing.

Place the other four lanterns on the correct pillars:
Screenshot.

Note: the designs on the statue are in relief, meaning the darker shape represents that phase of the moon.

Continued in Chapter Six: The Manor

With the rings in place and the candle lit, the final scenes of the standard edition game are shown.

NOTE: for more story, continue to the bonus chapter of the collector's edition.